In keeping with its violent and thuggish tradition of quelling dissent, PML N “activists” murdered a PTI protestor.  Earlier this year in May, the same PML N directed the Punjab police (PML N forms both the Federal Government as well as the Punjab Provincial Government) to drag out and murder innocent PAT workers from their private office premises.

Sami Ibrahim identified the shooter as a relative of the notorious PML N enforcer, Rana Sanaullah. The shooter is a guard of Rana Sanaulla’s relative.  Rana Sanaullah’s first cousin was also the infamous Rana Iftikhar Chaudhary – the corrupt former Chief Justice of the Supreme Court. 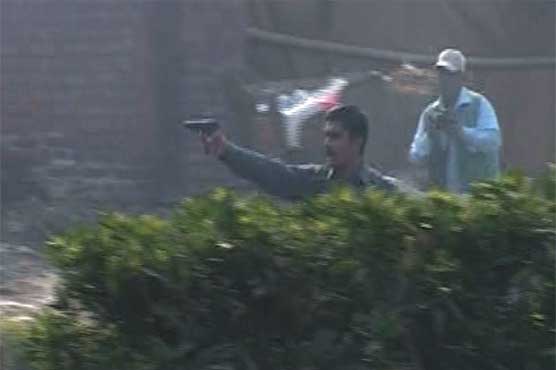 Furthermore, all the Deobandi and Salafi militant groups have publicly come out in support of Nawaz Sharif; thus once again aligning Pakistan’s opportunist liberatti with the Salafi-Deobandi extremist groups like JuD and ASWJ-LeJ in their opposition to PTI.

JuD/LeT just held a mammoth rally in Lahore during this weekend.  Lahore is the heart of Nawaz Sharif’s governing dynasty centred around cronies and relatives.  The JuD clearly showed, once again, whom it supports:

One heard the chants of “Allah-o-Akbar”, instead of party songs played by DJ Butt. An organiser said a principal objective was to show that the religious parties were a force to be reckoned with and that if secular parties (a reference to the PTI and PAT) could attract crowds at their ‘dance and song’ gatherings, the JuD could draw larger crowds motivated by their desire to establish Islam’s supremacy.

Unlike its hyperactivity during the last PPP government, the Judiciary has continued to show its clear bias in favour of the PML N government. Inspite of massacring PAT protestors earlier this year in May and then in August, the PML N government and its “anti-establishment” leaders continue to enjoy full immunity from the law.  The murder of a PTI protestor by a PML N thug highlights the PML N-Jihadi-Judiciary nexus and why this nexus can  continue to operate with impunity.