Mohammed Fneish, a government minister in Lebanon and a leader of Hezbollah, has said that Hezbollah is combating extremist takfiri jihadi organisations such as Islamic State (IS), because they “kill more Muslims than Israel”.

In a recent interview with BBC’s Mishal Hussain, the Hizbollah leader blamed the so called Islamic State (IS or ISIS) for killing more Muslims than its long-time foe Israel. Mohammed Fneish called for the conflict in Syria to be ended through dialogue rather than the use of force. The interview is part of the BBC News Syria Days. An abridged version appeared in the November 13th edition of BBC Radio 4′s ‘Today’ programme.

The interview marks the first time the Hezbollah leadership has formally spoken to the international media since the Syrian crisis began in 2011.

Mr Fneish, who is Minister of State for Parliamentary Affairs in Beirut, said: “What really causes a threat to Muslims is the likes of these organisations. This reflects badly on Muslims, because those groups kill more Muslims than Israel does. They kill Sunni Muslims as well.” However, he said that Hizbollah would still resist illegal occupations by the Israeli State. “This continues to be a battle against Israel, but the rules and the locations of the engagement have changed.”

We appreciate this statement in terms of its assessment of takfiri Wahhabi and Deobandi khawarij who are a threat not only to Sunni and Shia Muslims but also to Christians, Jews, Yazidis and the entire humanity. In the transnational Deobandi and Wahhabi terrorism facing the world today in coutnries as diverse as Nigeria, Syria, Iraq, Pakistan, Afghanistan, Somalia etc, the top priority for Christians, Jews, Sunnis, Sufis, Shias, Marxist, liberals, atheists etc should be to confront ISIS – NOT each other.

A non-violent, principled opposition to Israeli policies is the correct approach. Lebanon and Hizbullah need to realise that their support for the ISIS-Nusra loving Hamas militants has been less than successful – to put it mildly. This is a welcome new direction and should be pursued further towards normalisation of ties with the US and Israel and a joint fight against ISIS. The neighbouring Gulf monarchies have normalised their ties with Israel for decades now while continuing to fuel Hamas and ISIS violence against Sunni Sufis, Shias, Christians, Hindus and Jews. Lebanon and Iran must not be the ones get caught in these double games, but instead focus on ISIS and other franchises of transnational Wahhabi and Deobandi terrorism.

The neighbouring Gulf monarchies like Saudi Arabia, Jordan, Qatar, Kuwait, UAE and Edrogan’s Turkey have been playing a destructive double game for many years now. Their token acceptance of Israel has not stopped their double dealing of supporting Hamas, Al Qaeda, Muslim Brotherhood, Taliban, ASWJ-LeJ and now ISIS. Lebanon and Iran need to realise this and limit their focus to confronting ISIS and other transnational takfiri terror outfits and aligning with the global community to protect Sunnis, Sufis, Shias, Yezidis, Christians, Jews, and Hindus from the savagery of the transnationall Salafi-Deobandi complex enshrined in ISIS/Al Qaeda/Boko Haram/FSA/ASWJ/LeJ/TTP etc. 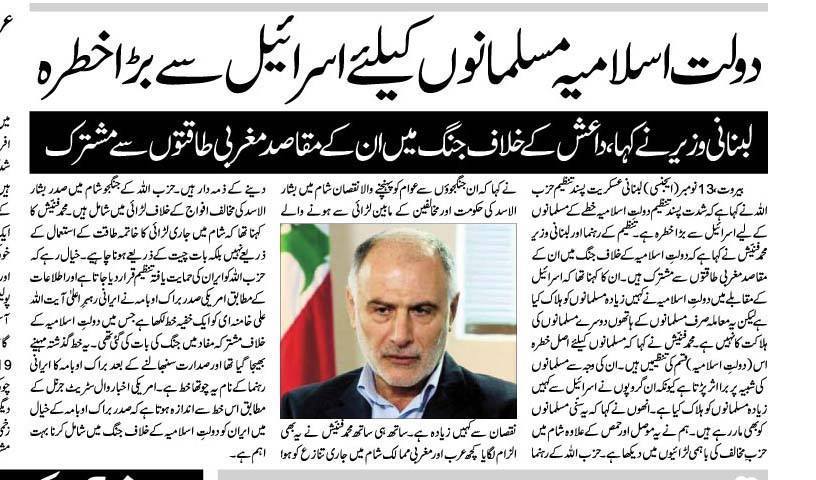