Often Sunni, Shia and Christians activists in Pakistan are asked by Deobandi activists and their “liberal” comrades to refrain from specifying the Deobandi identity of terrorists.

Many arguments are offered which I produce below along with my response.

1. That terrorists have no religion or sect. (Ironically, some of these very people who hide or deny the Deobandi identity of terrorists themselves clearly blame Buddhists in Myanmar, Jews in Israel, Muslims in the West, Shias in Iran etc for various real or preceived violations of human rights.)

2. That all religions and sects are evil or violent in nature. (By this argument, these critics resort to false neutrality, bash the perpetrators of violence (Deobandis) and their victims (Sunni Sufis, Barelvis, Shias, Ahmadis, Christians etc) by placing them in one category, ignoring the ethical and legal need to clearly identify and syampathise with the suffered community and condemn and act against the mass murderers.)

3. That Shias insult the Sahaba hence there is a rational explanation for Deobandi violence against them. This is the Tabarra vs Takfir issue. (Here the critics wipe out the fact that more than 45,000 Sunni Sufis and hundreds of Ahmadis, Hindus and Christians too have been killed by the same Deobandi terror outfits who are massacring Shias. Do they too insult the Sahaba?)

4. That Deobandis are blameless, harmless people who have been radicalized and exploited by Pakistan army (ISI) for use as Jihadist proxies in Afghanistan and Kashmir. (Here the apologists wipe out the ideological similarties between Deobandism and Wahhabism in terms of hatred of Sufi shrines and Milad/Ashrua rituals, their historical, political and financial links with Saudi Arabia, their violent jihadist roots and takfiri puritancial stance against Shias, Sunni Sufis and Barelvis. They also hide that Pakistan has become de-facto Deobandi state. They now have monopoly over state institution as well as private sector. If Deobandi clerics and leaders are reaping the benefits of this power, then they should also partake the responsibility.)

5. That Deobandis are a progressive, anti-imperialist school of thought. (Here the critics wipe out the fact that most of the founders and senior most clerics of Deobandi madrassas implemented the imperialst agenda of divide-and-rule by issuing takfiri fatwas against Shias, allegations of polytheism against Sunni Sufis and Barelvis, and expressly showed their anti-progressive approach by eulogizng the tyrant caliph Yazid.)

6. That Deobandis are corrupted due to the militant and political power they enjoy in Pakistan. Any faith or sect that comes to power becomes violent. (Here the Deobandi apologists wipe out the fact that in many Muslim majority countries, Shias or Sunni Hanafis/Sufis are in power and in those countries, there is no instance of Shias or Sunni Sufis massacring Deobandis, Wahhabis, Christians or Yazidis on the basis of their faith/sect. They also hide the fact that we are referring to incidents taking place in Pakistan in 2014, not to the events that happened in Ottomans’ Turkey or Safevids’ Iran many centuries or decades ago.)

7. That the Deobandi sect represents millions of people in Pakistan and India and that not every Deobandi is a terrorist. (Here the detractors resort to strawman refuting an argument which was never made. Indeed, not all Deobandis are terrorists but almost all suicide bombers and terrorists killed, arrested or at large in Pakistan happen to be from Deobandi sect. Of course, the majority of ordinary Deobandi folks are as peaceful and peaceloving as are Shias, Sunni Sufis, Hindus, Ahmadis, Christians etc. However, Deoband as a structured sub-sect (the Darul Uloom Deoband, religious groups, religio-political parties, madrassas, mosques) is responsible for systematic attacks on Shias, Sunni Sufis/Barelvis etc. Moreover, majority of Deobandis remain either in indifference or denial when it comes to Deobandi violence against Shias, Sunni Sufis and other communities. As noted by a friend, in Pakistan all organized sectarian-militants are in some form or manner related to the Deobandi school of thought, with active or passive support from mainstream Deobandi scholars and madressa runners, with very few exceptions. While a majority of mainstream Deobandi masses doesn’t want Shias and other minorities dead, it is a fact that they don’t question their mullahs, don’t try to stop them from spreading hate, don’t bother when their favorite muftis have photo sessions with known sectarian killers like Azam Tariq, Ludhyanvi, Aurangzeb Farooqi or Malik Ishaq. Thus, in a Nazi style, they too are guilty of their silence, apathy or confusion, although they are still different from the handful of killers and they need to be reminded of this fact. The transnational Wahhabi Salafi and Deobandi terrorism is a global reality. Its correct identification is a must before we hope to address this menace. Wahhabism is now associated with violence and terrorism worldwide. Nazism is now a swear word. Increasingly, writers, leaders and analysts worldwide are highlighting the Deobandi dimension of terrorism. Difficult it is but not impossible. It is a service to Sunni Deobandis to help them revert to Sunnism instead of sticking to a violent, intolerant cult. )

8. That Deobandis are not alone, Sunni Sufis and Shias too have terrorists such as Mumtaz Qadri or SMP. (Here the obfuscators hide the fact there is no single instance of ordinary Deobandis or Wahhabis being killed by Sunni Sufis or Shias in Pakistan by going through their identity cards. They also obfusacte that a few miniscule incidents of violence by Shia or Sunni Sufis are directed not against ordinary Deobandis or Wahhabis but against known leaders and activists of terror outfits eg ASWJ, LeJ or TTP. They also hide the fact that Mumtaz Qadri was brainwashed by a Deobandi cleric, and is an outler not a norm in terms of Sunni Barelvi violence in Pakistan.)

9. That Deobandis are a Sunni sect. (Here the Deobandi apologists hide the fact that Deobandism is neither a sect nor a sub-sect. Sunni is the sect and Hanafism is the sub-sect. Deobandism is a Wahhabi mutation within Sunnis and Hanafis and has been rejected by most Sunni Muslims. Deobandis are a vile, Wahhabi mutation of Sunni Hanafis, they attack Sunni Sufi shrines (mazaar) and hate meelaad and other rituals.)

10. That TTP, ASWJ, LeJ are Wahhabi (Salafi or Ahle Hadith), not Deobandi outfits. (Here the Deobandi apologists hide the fact that all of these terrorist outfits are led by Deobandi clerics, supported by Deobandi madrassas. They also hide the fact that despite political and ideological similarites, Deobandism and Salafism/Wahhabism are two different groups, Deobandis claim to follow Imam Abu Hanifa while Wahhabis/Salafis are non-followers (ghair muqallid).)

11. That not only Deobandis but also Shias, Sunni Barelvis, Ahamdis etc are takfiris. They have issues fatwas of takfeer against other sects. (Here the obfuscators hide the fact that there is no credible and consistent pattern of takfeer of other sects in Shia and Ahmadi schools. They also hide the distinction between takfir and takfirsm just as there is important difference between Islam and Islamism. Takfirism is the violent pursuit and implementation of the takfiri fatwas against other sects while munazira and takfeer is a different phenomenon.)

12. That instead of Deobandi terrorism, it is better to call it Sunni-Shia or Saudi-Iran sectarian violence or war. (Here the detractors hide the fact that more than 45,000 Sunni Sufis and hundreds of Ahmadis and Christians too have been massacred by the same Deobandi terrorists who have killed more than 22,000 Shia Muslims in Pakistan. Of course, there is no evidence of Iran-backed Shia violence against Sunni Sufis, ordinary Deobandis, Ahmadis, or Christians in Pakistan). 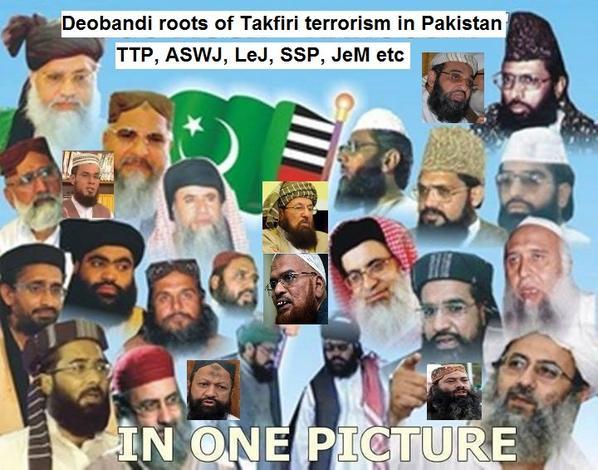