Home  »  Newspaper Articles   »   Does Pakistan have a plan for ISIS? – Marvi Sirmed 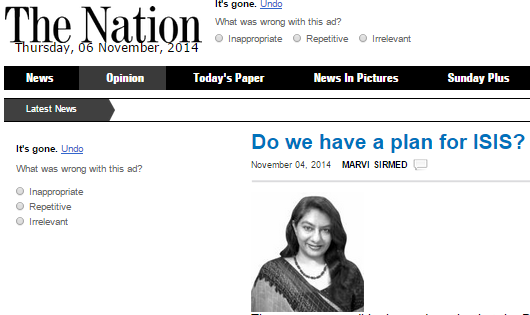 The consummate dithering and apathy that the Pakistani state has been demonstrating towards militant organizations gives it a unique status amongst the comity of responsible nations. There is probably no other state in the world ready to put its own citizens under the sword so willingly. Be it Lashkar-e-Tayyeba (LeT) or Jaish-e-Mohammad (JeM) or Lashkar-e-Jhangvi (LeJ) or Ahl-e-Sunnat Wal Jama’at (ASWJ), all of them – the proscribed outfits – are still allowed to operate openly or in some cases semi-clandestinely. The result? Not much, just a few dozen deaths of innocent citizens – uniformed and un-uniformed – almost every week.

While LeJ and ASWJ brazenly kept claiming responsibility of attacks against the Shia community especially the Hazaras during 2011-12 and to date, they had the luxury of operating their offices and training centers in most of Punjab, Sindh and Balochistan. Most intriguing is the observation that whenever there erupted an intra-group feud, the leading figures got lease of life by being ‘arrested’ and later either escaped from the detention facility or were released surreptitiously. This happened a couple of times with Malik Ishaq, the Takfiri Deobandi mass murderer whose conviction in the court of law has always been trouble.

With outfits like LeT and JeM, the problem is that they sound so ‘patriotic’ that probably no law-enforcing agency in Pakistan would dare touch them. On top of it, the individuals associated with these groups have now adorned their new benign faces with clean track records of social welfare. That is how the terror narrative is mainstreamed. With full state patronage that is.
During the flood havoc of 2010, the author had a chance to visit the flood affected areas in Sindh and was flabbergasted to see the amount of state patronage LeT’s former chief was getting to extend his ‘relief work’ to the flood victims. The kind of equipment and paraphernalia he was using, was not even imaginable for the state machinery dealing with relief and rescue. How the victims were being radicalized in camps administered by ‘former’ militant through daily sermons and pamphlets is another story.

Coming back to LeJ, it also has an alter ego with the name ASWJ given a benign and ‘pro-peace’ face, being mainstreamed through the smart use of media. Being proscribed is a minor fact that has never been an issue with the ‘azad media’ that vociferously gave these militants turned pro-peace social workers albeit with the instant admissions of terror incidents. Even the most progressive of friends in the media would argue for the ‘freedom of expression’ of these garbed militants. No wonder one sees dozens of ASWJ flags comfortably being hoisted on every other pole in the heart of Islamabad.

Having adopted a deceptive name – Ahl-e-Sunnat Wal-Jama’at – which is the title attributed to the Ahl-e-sunnat sect of Muslims known for their sufi tilt, the ASWJ was able to confuse the masses despite being thoroughly extremist Deobandis with Takfiri ideology. Similar is the case with Daulah al Islamiyah fil Iraq wal Sham (DAISH) or Islamic State of Iraq and Syria (ISIS) or Islamic State in Iraq and Levant (ISIL) or simply Islamic State (IS). An Islamic state has been manufactured as the collective of dream of many Pakistanis since decades. Why would one even think that most of these Pakistanis would raise an eyebrow over the consolidation of IS?

Over the last few months since the IS was declared in June this year, I have been doing a simple exercise of talking to random people about IS, the sabzi waala, the salesmen in different markets, the electrician, the colleagues, the officials at different government departments, the journalists, the students of different age groups and even the cleaning ladies and gentlemen. Not all of them approve of the executions and killings, but not all of them were ready to reject IS just because the West was bothered by it.

Till a couple of months ago, they had little knowledge about IS, and would ask me why I was so concerned about an insignificant bunch of ‘misled’ Muslims. The others would assure me that Quranic ‘symbols of Judgment Day’ were finally coming to be seen. They would tell me how the Quran had promised Muslims the throne of the world before Judgment Day, how IS would fulfil that promise and how the world would soon be ruled by Muslims.

I could not understand the increasing levels of IS awareness amongst this favorite circle of mine – the working class – especially when Pakistani media was conspicuously untouched by IS accomplishments. The riddle was resolved when a friend sent me the picture of graffiti welcoming IS. The graffiti was from the busy markets of Lahore and Peshawar. Then a kind soul sent the image of a similar ‘welcoming’ pamphlet being distributed at IDP camps in Bannu and in the bazars of Peshawar. One was in Pashto, the other was in Dari.

While writing this, I’m watching the coverage of a massive blast near Wagha border that killed over fifty people including women and was claimed first by Jandallah and then Tehrik-e-Taliban Pakistan. The former being an associated group of the latter. Both have declared war against Pakistan and Pakistan’s armed forces. Both have freedom to procure weapons and explosives and travel freely across Pakistan. Both have shown the support for IS in recent past.

All these groups of different shades (in terms of their relationship with the state of Pakistan) have one thing in common. Irrespective of what sentiments they have for Pakistan Army, all of them have freedom to operate, unabashed liberty to propagate their narrative, and blatant autonomy to market their brand and promote their message. The state that proscribed them under whatever circumstances and whichever pressures is nowhere to be seen.

The state that has historically used, trained and equipped a new militia in order to counter older war hardened ones, is clueless or acting clueless to impede the new upcoming menace. Is it because it is habitually complacent and over confident about their capability to deal with any new scourge even if it is of the intensity of IS? Is the state thinking of creating a new more formidable alliance of militant outfits that would be given the task to confront IS? Non starter. Those who we bank upon for it are already aligned with IS or are ready to be aligned.

A senior journalist tells me there is another chilling possibility. Far fetched though it may seem, it is possible that some of the Rommels we have might be thinking of the IS as a new asset for achieving a balance of power heavily tilted in our favor? It might seem silly, but it tells a lot about the kind of distrust the state has generated among its own people. Interested to correct it? Fix the country by putting your action where your mouth is. End the drama. Finish off LeJ, JeM, LeT, ASWJ, Jundallah, TTP. Let Pakistan move ahead.

The writer is an Islamabad based freelance columnist.
marvisirmed@gmail.com
@marvisirmed