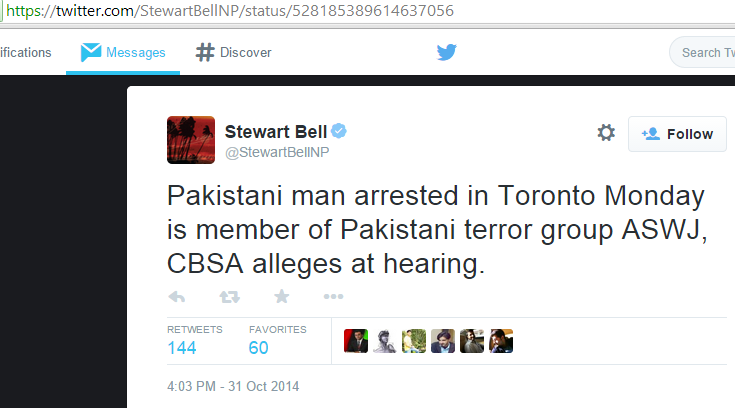 Deobandi militants are not at the gate, they are already inside Canada and Tarek Fatah knows it.
A Pakistani militant recently arrested in Toronto on terror suspicions is a Deobandi and is an activist of the banned Deobandi terror outfit Ahle Sunnat Wal Jamat (ASWJ, other names Sipah-e-Sahaba Pakistan SSP aka Lashkar-e-Jhangvi LeJ). The party (ASWJ aka SSP) is legally banned in Pakistan but is allowed to function because of the Saudi and Deobandi influence in that country. Canada for sometime has been witnessing radicalization of the Muslim youth mainly because of the Saudi-finaced mosques and the spread of the Deobandi and Salafi Wahhabi ideology. It is hoped that the arrest will lead to a rethinking in the Canadian government about how to deal with the danger posed by Saudi Arabia and its Deobandi and Salafi Wahhabi proxies.

Canadian government and intelligence agencies should also reflect on the role of (fake) liberal and (fake) progressive Muslims intellectuals and activists who use generic terms such as Islamist, extremist, Sunni etc to hide the specific Deobandi and Salafi Wahhabi identity of ISIS, ASWJ, TTP and Al Qaeda terrorists. For example, Tarek Fatah, a fomer Saudi resident of Pakistani origin, has been promoting anti-Shia and anti-Sunni Sufi hatred on social media through various means not least by constructing false Sunni-Shia binary to obfuscate Deobandi and Salafi Wahhabi terrorism not only against Shias but also Sunni Sufis, Ahmadis, Christians, Hindus etc.

Recently he was seen giving prominence to a Saudi agent provocateur, a peripheral Shia cleric’s sectarian remarks, who is widely condemned and disowned by the Shias themselves.

If you look at the material we have provided below, you will find out that there is no difference between Deobandi hate cleric Ahmad Ludhianvi and seemingly progressive Tarek Fatah when it comes to Shia hatred. It is imperative for Shias and Sunnis to see through the Deobandi-Wahhabi agenda of Tarek Fatah who has spent a number of years in Saudi Arabia where, it appears, he got his Shia-hating training. We recommend readers to look at the material below and try to link the Deobandi-Wahabi hate ideology under the thin layer of liberalism.

Under the thin veil of secularism and liberalism, Tarek Fatah is proving himself to be more dangerous than the blatantly sectarian bigots and terrorists of ISIS, Al Qaeda, Taliban and ASWJ.

This is not the first time. A year ago, Tariq Fatah Deobandi distributed a similar hate inciting video and later apologized to Shia Muslims.

How would you describe someone distributing the antisemitic hoax ‘The Protocols of the Elders of Zion’ (purporting to describe a Jewish plan for global domination) in Nazi Germany when Hitler and his security forces were slaughtering six million European Jews (The Holocaust). Of course, that would tantamount to enabling further violence against innocent Jews.

Well, that is exactly what Tarek Fatah did only two days ago when he distributed a highly inflammatory video in which a few Shia youths were shown insulting the Prophet Muhammad’s wife Ayesha.

It is shocking to see Tarek Fatah using his Twitter and facebook page to promote the video clip (screenshot attached) that can only promote greater hatred against Shiite Muslims, and was duly reprimanded by both Sunni and Shia Muslims.

I do not want to reproduce that atrocious clip. Needless to say, it does not represent Shia practice in the mainstream. I also note that the clip was produced and distributed by an organization (MEMRI – the Middle East Media Research Institute, with headquarters located in Washington, DC) which claims ‘to inform the debate over U.S. policy in the Middle East’ and for ‘timely translations of Arabic, Persian, Urdu-Pashtu, and Turkish media, as well as original analysis of political, ideological, intellectual, social, cultural, and religious trends in the Middle East’. I think MEMRI directors really need to set their priorities right instead of enabling further Shia genocide in Pakistan and other countries by distributing misleading and provocative videos.

Returning to Tarek Fatah, given his active interest in Pakistan, Middle East and the history of Islam, how could he remain oblivious to the extremely adverse implications of the video for Shiites, particularly for Shiites of Pakistan, who already face a slow-motion genocide. At least 19000 Shias have been killed in Pakistan by Saudi-sponsored Deobandi-Wahhabi militants because the killers consider Shiites as a deviant sect outside the pale of Islam; a Jewish (Sabai) conspiracy against Muslims. Fatah claims to be a friend of Jews while at the same time enabling hatred and massacre of ‘Jewish agents’ Shiites. See the irony?