Recently I happened to read a conversation between Tariq Ali and Patrick Cockburn on the rise of ISIS in Iraq and Syria. As usual, Tariq Ali indulges in false Sunni-Shia binary also somehow treating the ISIS (Salafi and Deobandi) terrorists as an anti-imperialist reaction to the USA’s hegemonic role in the Middle East. http://www.counterpunch.org/2014/09/29/the-rise-of-isis-and-the-origins-of-the-new-middle-east-war/ 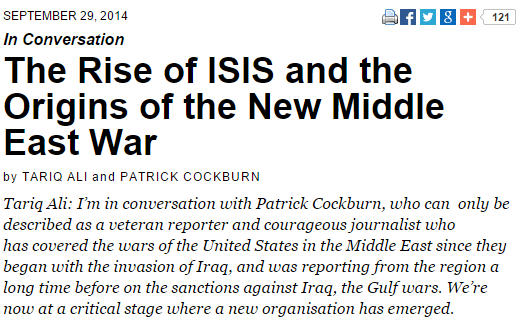 Patrick Cockburn appears to be more even handed in his narrative than Tariq Ali whose pro-Deobandi-Salafi sectarian outlook emerges every now and then. Notice that in Tariq Ali (and also Tarek Fatah’s) account, Arabs are reduced to Sunni vs Shia but not ONE mention of Kurdish religious identities which is majority Sunni (Hanafi and Shafi’i) with significant Sufi, Yezidi and Shia minorities. And no mention of Christian population of Iraq who are also targetted by ISIS, i.e., transnational Salafi Wahhabi and Deobandi terrorists. And did Shia Muslims marginalize Sunnis in Iraq to the extant that they are being accused off? http://www.gulfinstitute.org/wp-content/uploads/2014/07/who-is-the-sectarian-Saudi-Arabia-or-Iraq.pdf

Also, are Shias in Iraq really in control of the situation – to the extant- as being accused by Saudi Arabia and Saudi-Salafi-influenced Sunnis? Iraq is a Shia majority country but can someone please answer the question that since 2003, how many Shias have been killed in suicide bombings by Salafi and Deobandi terroritsts? If grievance of Sunnis is used to justify attacks against Shias after Maliki – then what about the bombings that started right from 2003? There are many gaps because, with all due respect, Shias not asserting their own discourse and intellectually lazy and apologist. Then what exactly are the ISIS’s concerns about Sunni Kurds, Yezidis, Christians and other non-Salafi non-Deobandi communities of Iraq, Syria and elsewhere?

When I see discussion on Iraq, I am reminded of how apologists mock Shias saying “hey, Pakistan has had Shia heads of State so the situation is not bad at all” “Benazir, Zulfikar Bhutto, Jinnah and Zardari are Shia so why are you complaining” etc. The thing is Benazir Bhutto, ZA Bhutto and Zardari never identified themselves as Shia but rather to the contrary. And Jinnah, while being a Shia based on proven documentations, also did not posture as a Shia. And their private beliefs have had none to minimal impact on acceptance of Shia right to life in Pakistan by Takfiri Deobandi groups!” Abdul Nishapuri similarly in Iraq, Shia prime ministers have had no impact on reducing daily toll of 50-100 Shias being killed by Salafi Wahhabi and Deobandi terrorists.

In short, one must refer to Robert Fisk and Patrick Cockburn who clearly refer to the Saudi-backed Salafi Wahhabi and Deobandi nature of tansnational terrorism of ISIS, Nusra, Boko Haram, Al Qaeda, Shabab, ASWJ-LeJ etc instead of obufscating it in generic terms such as Sunni, Islamist, takfiri, jihadist and terrorist. One must also beware of Tariq Ali and other pseudo-Marxists and pseudo-lefists who pose as neutral and non-sectarian but are unable to overcome their inbuilt hatred of Sunni Sufis and Shias and therefore eulogize Salafi and Deobandi terrorism as legitimate anti-imperialist phenomena.