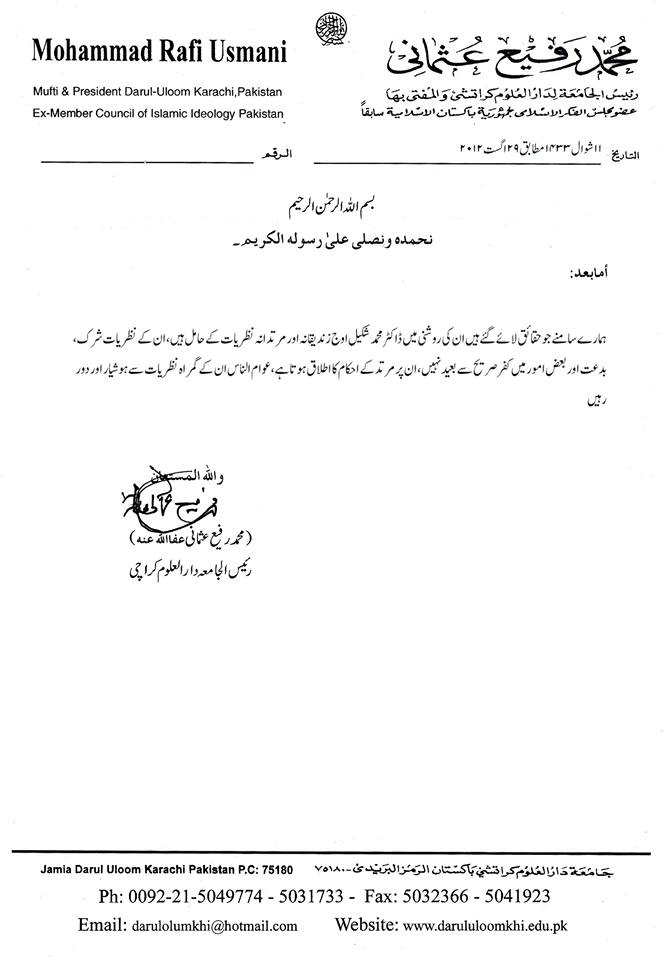 In Dr Shakeel Auj’s martyrdom, Pakistan has lost a fine scholar who was well versed in classical Islamic scholarship with a profound understanding of contemporary issues. Initial press reports suggested that his death was triggered by a fatwa issued by a famous seminary based in Karachi. But Mufti Rafi Usmani, the rector of that seminary, has now issued a clarification distancing himself and his madrassa from any such edict.

The fact remains that Dr Shakeel Auj was disliked in orthodox quarters for his unconventional religious views. There have been numerous instances of targeted killings in Pakistan of people with such views — mostly in consequence of an incriminating fatwa of kufr, apostasy or blasphemy.

At this point in time, it is important to focus on the increasing power of Ulema in South Asia from 19th century onwards, their use of fatwa as an instrument of guiding their Muslim followers in matters of beliefs and practices and also in its usage of instructing them about the most ‘authentic’ version of Islam by labelling rival Muslim groups as kafirs.

Recent scholarship on Muslim religious thought in South Asia accords primacy to the authoritative role of the Ulema since the early 19th century. Traditionally, it was deemed a sole prerogative of the Muslim ruler to enforce shariat of his own liking. But with the collapse of Muslim political authority and the ascendancy of ‘Christian’ colonial powers, Muslim societies were faced with the dilemma of not having a ‘Muslim ruler’ to implement shariat. In the case of India, for example, there was a gradual move to replace Islamic criminal or public law with a uniform code for India largely drafted by British legalists under the influence of Utilitarian philosophy. It was in such a situation that the Ulema rose to a position of prominence.

In the absence of a centralised Islamic authority, they arrogated to themselves a role of guiding the Muslims about various aspects of religious beliefs and practices. They projected themselves as scholars in Islamic law and scholasticism. The advent of print culture further aided the Ulema as they could now produce affordable versions of their books and religious journals which were read by people sharing similar cultural and religious idiom.

The role played by the Ulema in the same period to contest the attempts made by Christian missionaries to spread Christianity also added to their reputation.

As of today, the fatwas pose two major problems in Pakistan. First, they cast a strong influence over believers and serve as an alternative source of law which runs counter to the legal authority of the state. Secondly, the contents of fatwas have increasingly been bordering on hate speech.

With these modern communication techniques and newly acquired prestige as guardians of Islam, the Ulema appropriated for themselves the role of guides for Muslims. In order to fulfil this role, fatwas were issued with profusion. These fatwas could be quite wide ranging: affecting the individual as well as collective lives; ranging from anything about the permissibility of dining with Christians to the use of loud speakers for calling azan. More importantly, they could also be on ascertaining the righteousness of various reform groups and revivalist movements, mushrooming in the different regions of India with the agenda of guiding the Muslims about the ‘right’ version of Islam. 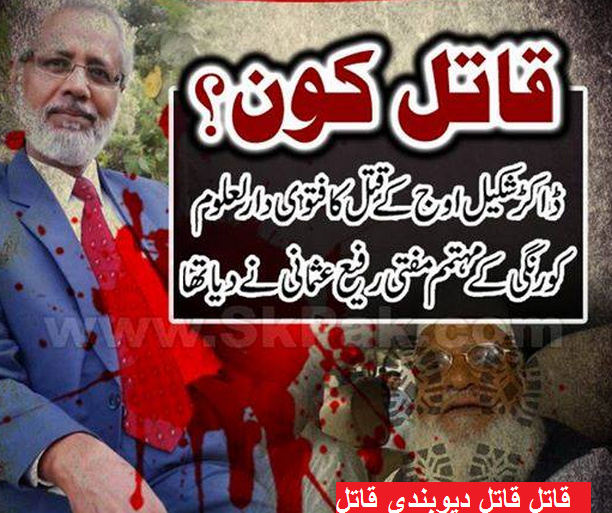 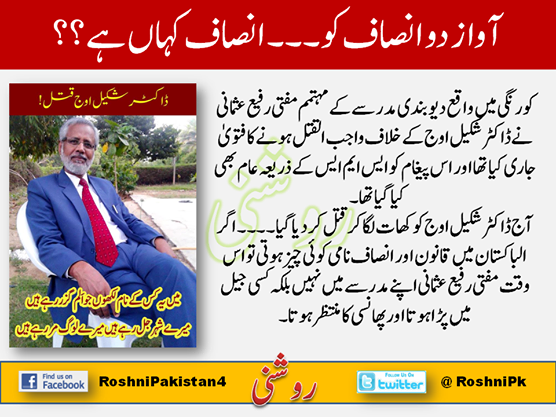 This is not to suggest that fatwas were never issued in the pre-colonial period. It is just that they did not carry the same leverage — especially in the presence of a strong central authority which was eager to instrumentalise religion for legitimising its own rule and authority.

From the colonial period to this date, fatwas have not carried the force of law. Yet, they have been an extremely powerful instrument since the early nineteenth century. Through fatwas, Ulema have carved out a niche for themselves in the public sphere. They have done so on the premise of providing guidance to the Muslims in matters of beliefs and practices. But the problematic part has been where the Ulema of various persuasions have judged the belief system of rival groups. This has led to situations in which scholar of every major sect has labelled the other as kafir.

‘Proto’ Ahl-i-Hadith groups in India were the first victims of a takfiri fatwa in these changed circumstances. Ahmad Raza Khan Barelvi castigated leading Deobandi scholars such as Rashid Ahmad Gangohi and labelled some aspects of Deobandi beliefs as pure kufr. Deobandis too used similar language against the rest. When the issue of Mirza Ghulam Ahmad’s claim of Prophethood came up during the 1880s, the takfiri fatwas against Ahmadis were almost unanimous.

Among all such fatwas, it was only this fatwa against the Ahmadis which was accorded a legal sanction through 2nd amendment in 1974. This emboldened some extremist groups to press the government to give a similar legal sanction to a fatwa of kufr against the Shias.

It should be added that while fatwas of kufr, from the very beginning, had the potential to divide people and fawn hatred, they did not always lead to violence. Figures like Sayyid Ahmad Khan boldly called into question so many traditional aspects of religious beliefs. Consequently, he was condemned by some as a kafir but he was not physically targeted. Niaz Fatehpuri ridiculed religion and got venomous verbal responses rather than an assassin’s bullet. Ghulam Ahmad Parwez challenged the authenticity of Hadith literature and yet he lived till a ripe age before he passed away in 1985.

But since the late 1980s, things have changed dramatically. The emergence of militant sectarian groups has eliminated any scope of an informed discussion on any aspect of religion. A specific version of religious orthodoxy is being imposed without there being any possibility of a counter narrative. Any voice raised against such obscurantism is forcibly silenced.

The fatwas — other than in the matters of Islam and kufr — carry enormous weight and leverage in various worldly affairs as well with or without the sanction of the state. These include such matters as banking interests and issues relating to marriage, divorce and property. Only a limited section of Pakistani population actually follows the provisions of Family Laws passed in 1961. According to that law, pronouncement of talaq three times in one go does not nullify marriage; rather it only serves as the starting point of divorce proceedings in a court of law. But since this position runs counter to the popular understanding of the relevant injunction of Hanafi fiqh, people consider triple talaq as binding.

Such a gap between law and religious decree can create many problems by offering ways of bypassing state authority for one’s private gain with the sanction of a religious decree. For example, I was recently told of a fatwa given by a revered scholar for the ‘benefit’ of Muslims living in Europe. Many European states offer added housing and income benefits to single mothers with no financial sources and little employment potential. The Mufti advised Muslim men to divorce their wives in writing which was in fulfilment of a legal requirement for divorce in European law but still ‘technically’ counted as single divorce as per Islamic law. Thus, men could still live with their ‘divorced’ wives while also enjoying benefits of the welfare state.

As of today, the fatwas pose two major problems in Pakistan. First, the fatwas cast a strong influence over believers to the extent that they serve as an alternative source of law which runs counter to the legal authority of the state. Secondly, the contents of fatwas have increasingly been bordering on hate speech if not inciting direct violence in clear words.

In these circumstances, what should be done about the issuance of fatwas? Should there be legislation banning fatwas? Or the power of issuance of fatwa delegated to a designated authority rather than to individual scholars?

My own understanding is that a simple ban would not solve the larger problem. The state, in any case, will not be able to implement such a law. Also, people do have a right to practice their religion in light of the opinion given by scholars they believe hold genuine scholarship and expertise about their religion. But it should not clash with the law of the state and should only be instructive in its content to shape the moral worldview of the believer.

Lastly, the statute books already have a law against hate speech and punishment for incitement to violence or murder. What can probably be added to such a law is provision about non-violent fatwa of kufr — if at all there is any such type. This is because even if a fatwa of kufr does not directly invoke violence, it does help spread hatred against an individual or sect at the social level and also offends their religious sensibilities. In addition, such a fatwa always has the potential to become a contested political issue rather than confining to the question of identifying authentic version of Islam.

Like so many other problems in Pakistan, it is not statist intervention but societal change that can bring about a long term solution to this problem whereby, hopefully, fatwas will eventually be diluted of their significance and largely rendered irrelevant for the greater section of population.