Home  »  Original Articles   »   ISIS Is not “Islamic”, they are “Islamist,” The difference? ISIS are Salafi Deobandi terrorists – by Rusty Walker 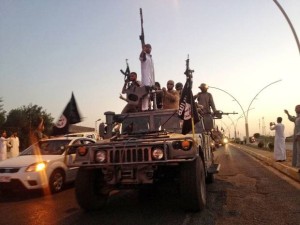 This article of mine is a rebuttal to the Professor Jerry A. Coyne’s misleading article in New Republic, “If ISIS Is Not Islamic, then the Inquisition Was Not Catholic: There is no such thing as ‘true’ religion.”  I’ll start by refuting his title.

By inferring that ISIS is “Islamic,” he misses the important distinction, ISIS is “Islamist,“ not “Islamic.” Islamists are “Salafist Deobandi Interpretation of Islam:” an extremist’s interpretation of the religion of Islam; not the true Orthodox Islam, or, “Islamic,” is a term related to peaceful Islamic belief. Since 9/11 the United States’ White House administration and informed press, have coined these terms to make sure there is a distinction between radical Islam and non-radical Islam.

By not identifying the Salafi Deobandi identity of the Islamist terrorists the author is in fact doing a great disservice to the readers of the New Republic. How can we fight the terrorists if we do not correctly identify them? By broad brush grouping under the Islam umbrella, we allow the Takfiri Salafi Deobandi beheaders and organ eaters to hide among the vast majority of peaceful orthodox Muslims.

Jerry A. Coyne is a professor of Ecology and Evolution at The University of Chicago and author of “Why Evolution is True.”

“ISIS slaughters its way through Syria and Iraq, it became inevitable that we’d hear from apologists who claim that ISIS is not in fact “true Islam,” and that its depredations are due to something other than religious motivation. Those motivations, say the apologists, are political (usually Western colonialism that engenders resentment), cultural (societal tradition), or anything other than religion.

These apologists, of course, which now include President Obama, are motivated by a desire to avoid criticizing religion at all costs—especially Islam. In America, criticizing religion is political suicide, and Obama naturally wants to do all he can to encourage “moderate” Muslims. As Sam Harris concluded on a post on his website, some “scholars and pseudo-scholars” cling to a ludicrous notion that the actions of jihadis like those of ISIS aren’t motivated by religion.”

The author is clearly wrong in his title, as he is associating “Islamic” without distinction from “Salafi Deoabandi extremist.” I. Extremist Islam is in fact a tribal version, dating back to Abd Al-Wahhab (founder of Wahhabism), Deobandi’s revivalist movement within Hanafi Sunni Islam (Ahlus-Sunnah wal-Jama’ah and most other terror outfits in South Asia); Maulana Maudoodi’s extremist interpretations, and Sayyuid Qutb, from Egypt who gave justification to Al Qaeda for the killing of Muslim on Muslim. Wahhabists/Salafists reject Shia, Ahmadi’s, Sufis Sunnis, orthodox Sunnis, Hindus, Christians and Jews, and moderate Sunnis.

Professor Coyne comes across as anti-religion. That is fine, but this apparently informs his bias. I was raised Catholic, but I have friends of all religions: Christian, Jew, Hindu, Sufi and many Shia and Sunni Muslim friends. I believe in giving respect to the peaceful, religious faithful, and their moral standards, as long as it does not oppress women (as the fundamentalist Sunnis do in Saudi Arabia, Bahrain, Yemen, UAE, and Africa). The author would be less defensive sounding if he would acknowledge that there can be an Orthodox Islam that is peaceful and distinct from Extremist Islam, who are radical off-shoots. I know many a Sunni that send their daughters to universities to be doctors, lawyers, and enjoy freedoms beyond Sharia Law.

If we, as Professor Coyne suggests, are to declare Islam violent, then so is Christianity. The tiresome narrative is distant history. I believe this is why the author brought up the Inquisition (15th Century) – toss in the wars of earlier history to prove a point today. Bring up Islam’s invading and conquering up until the Ottoman Empire, then we must bring up the tired history of Early Christianity: the Crusades, and then, Christianity also being a non-peaceful religion, and equally interested in violent acquisition of real estate in the name of religion as were the Moors in Spain.  Certainly, the Yahveh of the Torah/ Old Testament was a frightful and merciless murderer if we are going to pretend that Christians must take the Bible as literal in order to be faithful- Christians and Islamics don’t behead infidels or stone women in the name of religion, nor abide any religion that practices such horrific, or draconian laws (Saudi Arabia and neighboring Sunni nations and Africa may be the exceptions that prove the rule). But, the author leaves out the reality that religions evolve with society, as do the interpretations of holy scriptures.

The Appalachian fundamentalist Christians hardly represent Christianity; nor do the fundamentalist Sects, Sheiks and Mullahs that become radicalized represent Islam. Al Qaeda and Muslim Brotherhood, HAMAS, al Qaeda, ASWJ, LeT, ISIS, et. al, are Wahhabi Deobandi Salafi or Khawariji terrorists. Although the Salafi Wahhabi terrorists are rooted in Islam, by simply calling them Islamist is obfuscation and a free pass to an armed but tiny minority of terrorists.

Stating that those “who claim that ISIS is not in fact “true Islam,” are “apologists” is incorrect. I am not an apologist, but know that Islam does not approve of ISIS. But Professor Coyne builds a strawman argument often – ISIS is now- the Inquisition was in the Dark Ages. Shia and Sunni moderates condemn the Takfiri Salafist & Deobandi interpretation of Islamic faith. It is a Wahhabi revisionist tribal mentality that was common in tribal societies.

His final remarks are true: