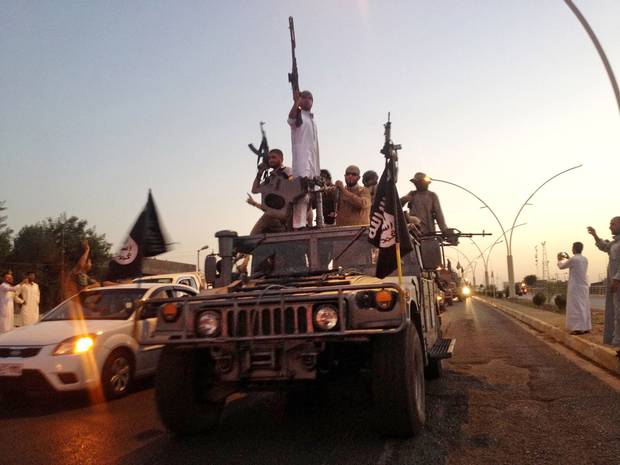 Resurrection, reinvention and linguistics. Barack Obama did the lot. And now he’s taking America to war in Syria as well as Iraq. Oh yes, and he’s going to defeat Isis, its “barbarism”, “genocide”, its “warped ideology” – until the bad guys are “vanquished from the earth”. What happened to George W Bush?

But let’s go through this with a linguistic comb. First, Obama is going to resurrect the Sunni “Awakening Council” militias – a creature invented by a certain General David Petraeus – who were paid to fight  Wahabi/Deobandi al-Qaeda by the Americans during the US occupation of Iraq, but who then got blasted by al-Qaeda and betrayed by the Shia-dominated Iraqi government. Obama has even invented a new name for these militias: he called them “National Guard Units” who will “help Sunni communities secure their own freedom from Isil”. National Guard indeed!

Then there’s the reinvention of the “moderate” Syrian opposition which was once called the Free Syrian Army – a force of deserters corrupted and betrayed by both the West and its Islamic allies – and which no longer exists. This ghost army is now going to be called the “Syrian National Coalition” and be trained – of all places – in Saudi Arabia, whose citizens have given zillions of dollars to al-Qaeda in Iraq, Isis, Isil, IS (you decide on the acronym),Salafi Jabhat al-Nusra and sundry other bad guys whom Obama now wants to “vanquish from the earth”.

And then the linguistics. Obama “will not hesitate to take action against Isil in Syria”. But that means that he is going to “vanquish” the enemies of the Syrian President, Bashar al-Assad, whom Obama was also going to “vanquish” last year – until he got cold feet and decided to leave him alone. So if the enemy of my enemy is my friend – as the Arabs supposedly tell each other – Assad can regard Washington as his new ally.

But no. For then came the dodgy little explanations: America “cannot rely on an Assad regime that terrorises its people”, a regime that “will never regain the legitimacy it has lost”. But the US has never been asked to “rely” on Assad – it’s Assad who relies for support on Russia. And Assad’s legitimacy is accepted by China, Iran – with whom the Americans are having cosy nuclear talks – and Russia, whose armies clearly do not “hesitate to take action”  in Ukraine.

All in all, then, a pretty state of affairs. And part of the problem is America’s non-existent institutional – or national – semantic memory. Obama tells us that America “will hunt down terrorists who threaten our country”. But I recall Vice- President George Bush telling his people after the US Marine bombing in Beirut in 1983 that “we are not going to let a bunch of insidious terrorist cowards shake the foreign policy of the United States”. Then the American military fled Beirut. Three years later, President Ronald Reagan said of Muammar Gaddafi of Libya (“the mad dog of the Middle East”) that “he can run – but he can’t hide”. But Gaddafi did hide – and was then kissed by Tony Blair after being forgiven for all his “terrorism” – only to be murdered by his enemies when he became a “terrorist” all over again.

Obama tells us that America “will hunt down terrorists who threaten our country” (EPA)
One can see, of course, how difficult these lessons in Middle East history must be for the average American. All these forces of evil being vanquished over and over again, and then – bingo – there’s another force of evil to vanquish. So Obama produces words that are easy to swallow. “genocide”, “barbarism”, “cancer”.

Only occasionally is there a non-sequitur which Americans must ignore. There was, for example, Obama’s rather odd reference to “radical groups” which “exploit grievances for their own gain”. And what would these “grievances” be, I wonder? The illegal 2003 invasion of Iraq and its concomitant bloodbath? Our continued occupation of Afghanistan? The pulverisation of Gaza by America’s greatest ally?

Obama mercifully left that ally’s name unspoken, although it has a very big stake in America’s newly expanded war in the Middle East – after all, it shares a common border with Syria. But Saudi Arabia, Qatar and all the other Croesus leaders of the Arab Sunni Gulf might not like their people to be reminded that their latest alliance with Washington – training all those non-existent “moderate” chaps, for instance  – is going to help Israel.

The clunking irony is that the “Wahabi/Deobandi Islamic State’s” men do butcher, throat-slit and ethnically cleanse their enemies. Their claptrap “state” and their sadism have turned them into a weird combination of Mickey Mouse and Genghis Khan. Nor, weirdly, has the IS really tried to exploit the anonymous “grievances” to which Obama referred. So totally introverted is their “ideology” (the quotation marks are obligatory) that they uttered not a word of sympathy for the Palestinians of Gaza during their latest bloodletting. But grievances there are. They do exist. Will there be a Kurdistan? Will there ever be a Palestine?