This is how Pakistan’s English press, in tune with secular Deobandis of ANP-PKMAP and fascist Deobandis of JUI-ASWJ, is insulting female political activists in PTI and PAT’s sit-ins in Islamabad.

“Irsha 38, a sex worker in Rawalpindi, the gathering at constitution avenue is a blessing and a perfect place to attract teenage clients without the fear of police ‘harassment’.
Every evening Irsha makes sure she does not miss the moment when the crowd at D chowk reaches its crescendo. Her pimp “Nauman”, bring irsha to the protest venue on a motorbike from Rawalpindi where she finds enough clients to take them to a rented flat in Sadiqabad. In fact the idea was given to Irsha by another sex worker whose single visit to the protest venue earned her twenty new clients.
http://nation.com.pk/E-Paper/islamabad/2014-09-11/page-13

Is the newspaper is right?

Could it be that Imran’s sit-in is designed to stop the prostitutes from repenting and joining the Tableeghi Jama’t?

Making sure that the young men sow their wild oats inappropriately instead of indulging in pedophilia, the country’s favorite sexual pastime and the conduct of many a good Muslim men.

I wonder which two women have been pictured with this article? that too from TuQ’s sit-in instead of the PTI.

In a free country they would have taken the paper to court but Pakistan is a place made for bullies where media is the new monster. 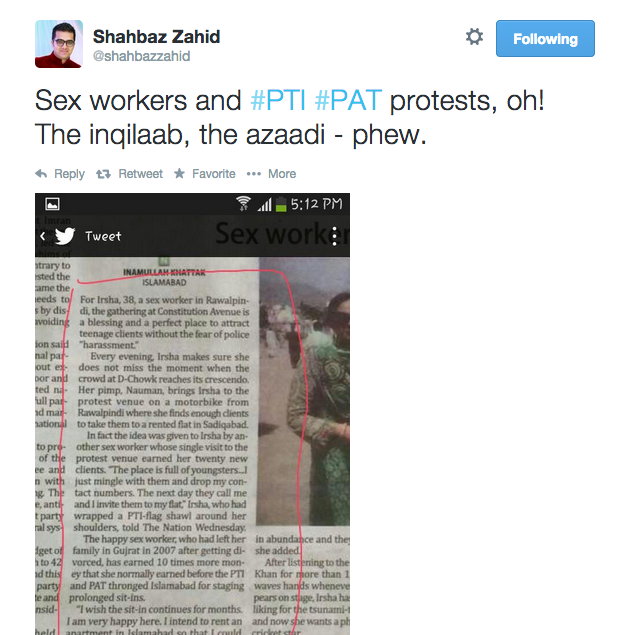 The most vulnerable of citizens are forced to humiliate themselves in a society which does not take care of their own. The working women may have a family or a loved one needing urgent medical attention. Who is worse ? The prostitute who is forced to humiliation or the state and society which has by all accounts failed to care for the poorest and the downtrodden.

Why are these prostitutes so bad anyway? They offer a service for a price and fullfil their contract. Can you say that about Nawaz Sharif or any politician for that matter?

The worst people are those who cannot sympathize with the plight of these the most vulnerable citizens.