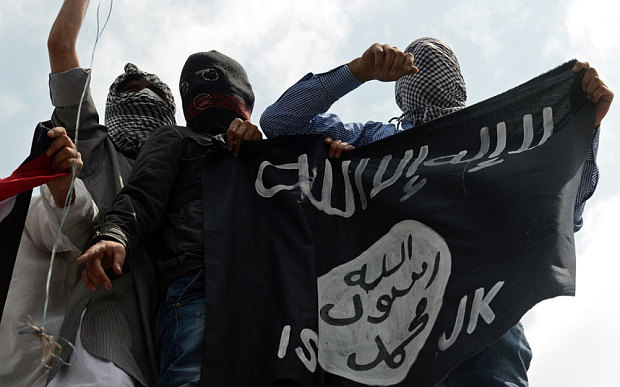 The Islamic State is challenging the Taliban and al-Qaeda in its Afghanistan and Pakistan heartlands and claiming both countries as part of its ‘caliphate’.

Islamic Slate leaflets proclaiming the group’s intention to bring its barbaric form of Islam to Pakistan and Afghanistan were posted throughout Peshawar, the capital of the Khyber-Pakhtunkhwa frontier province, in the last few days, and have also been distributed to nearby Afghan refugee camps.

The leaflets, published in the local Pashto and Darri languages and bearing the Isil ‘Fateh’ (victory) flag, said the ‘caliphate’ it had established in Syria and Iraq extended to Iran, Afghanistan, Pakistan, and some Muslim central Asian republics.

They called for unity among Muslims and committed themselves to victory or martyrdom in their fight to recreate the ‘caliphate’.

The group appears to have some powerful allies in Afghanistan and Pakistan, including one former Guantánamo Bay inmate and some commanders loyal to the Afghan insurgency leader Gulbuddin Hekmatyar.

One of the commanders told the BBC earlier this week that he was willing to join Isil if he was convinced they are sincere in reviving the caliphate – the series of Islamic states and empires which flourished in the Middle East and West Asia from the 7th century until the fall of the Ottoman Empire.

“We are waiting to see if they meet the requirements for an Islamic caliphate… we are sure that our leadership will announce their allegiance to them. They are great mujahideen, Commander Mirwais of the Hizb-i-Islami group, currently fighting alongside the Taliban in Afghanistan, told the BBC.

Islamic State’s arrival in Pakistan is expected to provoke a power struggle among Islamic militants in the area who have traditionally owed allegiance to the Afghan Taliban leader Mullah Omar, whose supporters regard him as the true ‘caliph’.

The group’s presence emerged shortly before al-Qaida’s leader Ayman al-Zawahiri announced it had established a branch of its terror organisation in India to wage a holy war to establish its own ‘caliphate.’

The move was seen as a pre-emptive strike to raise its profile among wealthy donors in the Middle East and to curtail the Islamic State’s imperialist ambitions.

Al-Zawahiri said its new holy war would bring justice for Muslims in India and singled out Gujarat, where India’s prime minister Narendra Modi was chief minister for 12 years and presided over the state during the 2002 riots when an estimated 800 Muslims were killed by Hindu mobs. He also said the new group would operate from Kashmir to Assam and Burma, where Muslim minorities have also suffered communal attacks.

The group would “raise the flag of jihad” under the leadership of Asim Umar, a senior Pakistan-based al-Qaeda propagandist who called on Muslims in India’s Jammu and Kashmir to wage a war to “wave Islam’s flag over Srinagar’s Lal Chowk” in a video message earlier this summer.

The Indian government ordered a high alert in a number of states amid fears that any terrorist strike could provoke communal violence between Muslims and Hindus.

Michael Semple, former deputy European Union envoy to Afghanistan and a leading expert on Jihadist groups, said Islamic militants regarded the Indian subcontinent as a part of the old caliphate and that it was to be expected that “as soon as Islamic State gets its act together you will see it trying to cover South Asia. And before it goes public with that, al Zawahiri is trying to snap up the volunteers for al-Qaeda.”

Both groups are competing for volunteers and donors but the Islamic State’s success in Iraq and Syria had given it a big advantage over al-Qaeda which appears to have dwindled in recent years.