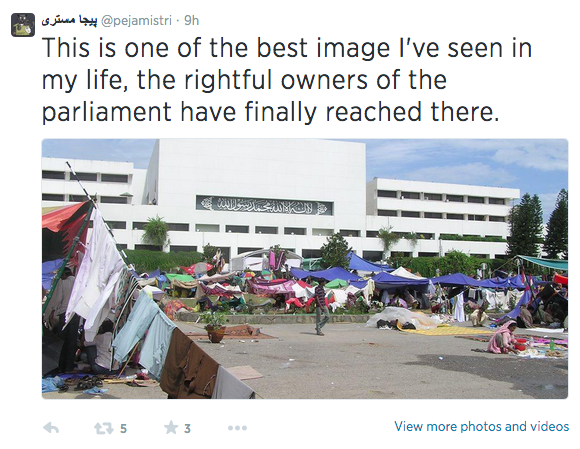 “Another under-appreciated point about PAT and its allies in the Sunni Ittehad Council and the Majlis Wahdat-ul-Muslimeen (the leading Shiite political party) is that together they represent the moderate, liberal Islam of the overwhelming majority of the Pakistani people. This Islam, the Islam of Bulleh Shah, Shah Hussain, Ghulam Farid and the great Ali Hajveri, patron saint of Lahore, is anti-Taliban Islam, anti-Takfiri Islam. For too long this Islam was relegated to the political sidelines because it lacked a political voice. The Sheikh-ul-Islam, after a lifetime of preparation, has given it that voice.

The fight against the Taliban is not just a military struggle. It is also an ideological struggle between moderate and Takfiri Islam. The army can use its tanks and guns but for all-out victory, for success on the ideological front, for Pakistan to return to its moorings, there has to be a meeting of minds between the army and moderate Islam. And if there is such an understanding, conscious or otherwise, Pakistan will never go the way of Iraq or Syria. No Salafi brand of fitna (discord) can arise on its soil.” http://www.thenews.com.pk/Todays-News-9-266655-As-the-end-approaches

The current standoff between the PTI and PAT protestors against the PML N government is the clash between the Pakistan Nationalist establishment vs the International Takfiri establishment.  Pakistan Awami Tehreek (PAT), led by a moderate Sunni Sufi cleric Dr Tahir ul Qadri represents the largest anti-Takfiri alliance in Pakistan. Imran Khan too is being vehemnetely opposed by takfiri terror outfits including ASWJ-LeJ and TTP (Taliban). At a time when Saudi-backed PM Nawaz Sharif wants to implement his handler’s vision of turning Pakistan into another religiously Balkanized state like Libya, Iraq and Syria, the PTI-PAT alliance is the biggest hurdle in the path of the destruction of Pakistan.

Efforts are underway to turn parts of Pakistan an ISIS type Caliphate under Sharif supervision and Saudi backing. Pakistan is strategically powerful country. Plunging Pakistan into a ISIS style blood bath could please many.

During the 15-month reign of the Sharif family regime aka crony PML N government, the Saudi establishment has made further deep inroads into Pakistan.  The Saudi and Gulf funded ISIS has established a presence in Pakistan in the form of ASWJ-LeJ – a crucial ally and vocal supporter of PML N.

Unlike many other muslim majority countries, Pakistan still has a majority centrist-left Sunni-Sufi base that is at harmony with the Shia, Christian and Hindu population of Pakistan.  This base has galvanized it self politically in the form of the PTI-PAT alliance to finally push back against the powerful Deobandi-Salafi establishment and failed status quo parties like the PPP and MQM.

After a brutal crackdown on the protests by the Pro-Taliban PML N as well as heavy patronage of some media groups – refer to the audio slip by PM Nawaz Sharif in favour of the JANG Group’s GEO channel – it appears that the Pro Takfiri section of the establishment has come out ahead in round 1.

Pakistan’s commercial liberals, (fake) civil society and some sections of the media dismissed the protests as well as the genuine grievances of both PAT and PTI as an “establishment script”.  In this regard, their claims were supported by extremist Deobandi and Salafi groups like JUI F, ASWJ-LeJ and LeT.

All this became crystal clear when the rabidly Pro Taliban allies of the PMLN government like the JUI-F and the family-run party of the thuggish Mahmood Achakai incited further State violence against both PTI and PAT in parliament today.

The extremist Deobandi and Salafi lobby in Pakistan have been the most vocal supporters of the PML N regime. Those commercial liberals/selective human rights activists like Asma Jehangir who accuse Imran Khan of being an establishment and Taliban stooge carefully and deliberately omit that the Taliban’s main urban affiliate, ASWJ-LeJ is supporting Nawaz Sharif!  So is JUI F which is the Taliban’s parent organization as well as LeT.

Are these Deobandi and Salafi terrorist bigots now considered “anti-establishment”?

Clearly, the protests by the PTI and PAT has been framed in the most dishonest manner as establishment vs anti establishment.  According to this framework, Ziaist spawn like PML N and pro Taliban and anti-Indian terrorist groups are considered to be the bulwark of democracy and bastions of anti establishment.

The chants of Ya Rasoolallah and Ya Ali in the peaceful rallies and marches of PAT and PTI are sign of increaing unity and pluralism of Pakistanis across boundaries of faith and sect. Enemies of Sunni-Shia unity are afaid of the PAT and PTI rallies under the leadership of Imran Khan and Dr Qadri.

The emerging PTI-PAT alliance has genuine grievances that are rooted in democratic culture.  Their past and present actions are not faultless but neither are anyone else’s.  The selective bashing of these two popular political movements should not be the basis of deliberately obscuring their demands.

All the major political parties including the Interior Minister agrees that the last elections were rigged with constituencies in Pakistan having tens of thousands of unverified votes. Imran Khan initially wanted a very limited audit of the last election results.  After fourteen months of exhausting all other parliamentary and constitutional resources, Imran Khan took the extreme but democratic option of mass level protests in the country’s capital.

No other party supported the military operation against the Taliban with as much clarity and substance as the Sufi-oriented PAT.  The ruling political party, PML N did its best to delay operation by dragging on a farcical “peace process” with the Taliban and its myriad factions even as thousands of Pakistanis were killed after the Sharif family and their cronies took office.  For supporting an action against the Taliban, PAT workers were attacked at the privately owned Minhaj ul Quran.

In a shocking display of police brutality, over 100 men and women were either killed or critically injured on the order’s of Punjab chief minister, Shahbaz Sharif (the brother of Prime Minster Nawaz Sharif).  This has been determined in a judicial commission report.  Still it took  nearly three months after this incident just to get a police report filed.  The basic rights of any citizen were denied and were only grudgingly allowed after Nawaz Sharif dragged in the army in the mess created by him and his family and crony run party.

It is this status quo that PTI and PAT are protesting against.   Their vote banks represent the country’s majority Sunni (Barelvi, Sufis), Shia, Christian and Sikh communities. These communities have been at the receiving end of the minority Deobandi and Salafi terrorist groups and fascist parties.  These vote banks have migrated from corrupt, inept and apathetic status quo parties like the PPP and MQM to more dedicated parties like the PTI.