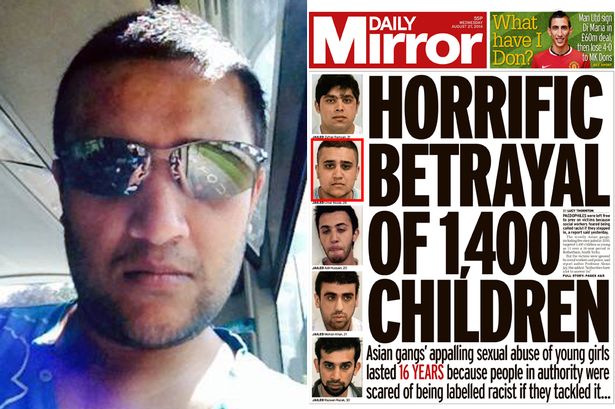 One of the abusers at the heart of the Rotherham child sex scandal today boasted he was “living the high life” – leaving his victim distraught.

Sick Umar Razaq – released from jail after appealing the length of his sentence – posted a picture of himself in sunglasses on Facebook as he flew off to Pakistan.

Earlier he had boasted: “Can’t wait… Roll on to the lifetime holiday.”

He added: “Three days and I’m outta this country for a very long time. Feeling happy.”

The 28-year-old sex attacker, one of the ring leaders of the child grooming gang, also whinged about women crying rape in a disgusting dig at his victim.

The taunt left the girl – now 19 and named only as Lizzie – in tears.

She sobbed: “This is beyond disgusting. How can he be allowed leave the country?

“He shouldn’t have a passport or be on Facebook. This man beat me, strangled me and abused me.

“He has stalked me since he got out.”

She went on: “Umar was the worse one. He was really violent. He strangled me twice and threatened to kill me.

“It’s disgusting he can do this to us. It’s horrible.”

Umar – who lived close to a park where the Asian gangs preyed – left the message online just hours after police revealed there were 173 live investigations into grooming in South Yorkshire.

Umar was one of five vile predators jailed in 2010 for grooming school children in Rotherham.

Lizzie, who described the men as “pure evil” said she was 12 the first time she was raped and she was “abused hundreds of times”.

She said: “I was abused by all five of them. They passed me around.”

She added: “Not one of them has ever given us an apology.

“They dragged people in to cars and drugged them. They damaged my body and they took away my virginity.

“None of their sentences were long enough. They told me my family hated me and didn’t want me but they did and they would marry me.

“At first I believed it all and then they turned nasty.”

She said they threatened to set her house on fire and pour petrol down their throats.

Lizzie also claimed her family begged social workers for help but said: “They used to make me feel bad about it – one of them kept saying ‘Those men you’re seeing – do you know that’s wrong?’

“They never told me it was them that were wrong – they made me feel it was me.”

Reliving her first attack in an alleyway when she was 12, she said: “I felt disgusting. When one of them strangled me I thought I was going to die.

“He was strangling me so tight I couldn’t breathe. They put me through hell.”

At Sheffield crown court, Umar was jailed for four and a half years in November 2010 for sexual activity with a girl of 13. His sentence was cut to three-and-a-half years and he is now free.

The other men in the gang were Zafran Ramzan, his cousin Razwan Razaq, Adil Hussain and Mohsin Khan. Ramzan, then 21, was jailed for nine years for raping a 16-year-old girl and two counts of sexual activity with a child.

Razwan Razaq, 30, was jailed for 11 years, while Hussain, 20, and Mohsin Khan, 21, were sentenced to four years in prison. It is believed only two are still behind bars.

Khan hid his life of depravity behind his middle class background. The mortgage adviser lived in a £300,000 house in Moorgate, a favourite choice of doctors from the nearby hospital.

A neighbour – an ex-consultant – said: “It was a shock when we discovered what he had been involved in.”

The final gang member Hussain, was recalled to prison last year. It is believed he breached his licence agreement by going to a children’s play area.

It also emerged Ramzan had links with a bogus bride network. His dad Mohammed Ramzan, 59, was jailed over a wedding plot in which women were preyed on before they were given £300 to pose as brides in fake ceremonies abroad.

The relative said the family home was pelted with eggs and added: “Our family just want to get over it, we just want to be able to move on.

“Umar applied for a million jobs. I saw how depressed he was getting.

“Now he has gone to Pakistan for the foreseeable future I don’t think he will come back to be honest.”

But today locals spoke of the arrogance of the sex abuse gang, with Umar boasting to cops before fleeing to Pakistan: “You can’t touch me.”

Laughing pervert Umar Razaq was seen by neighbours arrogantly strutting before he left the UK after serving his sentence.

One of Umar’s former neighbours said: “He has always been cocky and arrogant and didn’t show any shame for his crimes when he arrived back here.

“Recently couple of police cars arrived and Umar just strolled along the street with his rucksack on his back, without a care in the world.

“A neighbour, angry at his release, shouted: ‘Have they come for you?’

“But Umar was just laughing with his head in the air and shouted loud enough for everyone to you: ‘No they’ll not come for me – you can’t touch me.’”