Before you read on please watch this video footage of the PMLN government’s absolutely unprovoked attack on its innocent citizens in the middle of a dark night in Lahore. Fourteen men and women were murdered and, among the scores injured, another eighty were wounded by direct bullets. This happened more than two months ago and since then Sahrifs have shown an utter lack of remorse for slaughtering these unarmed and peaceful members of Minhaj Ul Quran within their own confines. The bereaved families and their relatives continued being persecuted and were not allowed to register the FIRs for these murders. An important point to note here is that regardless of who ordered and masterminded this dastardly act of violence, Sahrifs government’s subsequent actions have made it clear that it has no qualms about what happened on that night of 17th June in its seat of power, Lahore, and Pakistan’s second largest city. 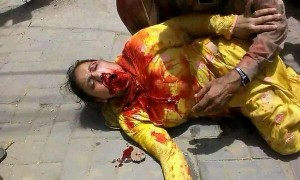 This was done by a government which has several times unilaterally sued for peace with the TTP, whose terrorists have killed over seventy thousand Pakistani civilians and soldiers by blowing them up in bomb attacks, shooting to death, cutting throats, hacking to pieces, and torturing to the last breath. This government has also presided over unprecedented number of mob attacks on the minorities, the latest being an attack on the Ahmadis in Gujranwala in which three women died when their homes were torched by a mob. This genocidal pattern of behaviour and cycle of butchery targeting the minorities is systemic, has been recurrent and regular for the last few years, and under the present government is often instigated by its senior representatives. 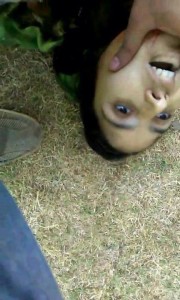 Talking of the coldblooded and unprovoked massacre in Lahore, I shudder to think that in our country today such things can happen. Such horror yet our Prime Minister has failed to show any remorse leading to justice for those whose loved ones lost their lives at the hands of his government. The problem that this government has is the Prime Minister himself- a Prime Minister who prides himself on his own weakness and incompetence by his persistent inability to trust anyone except his close family members. A Prime Minister who is as confused and as clueless as the comic character called Chauncey Gardiner in the renowned 1979 Peter Seller’s Hollywood blockbuster titled `Being There’. A Prime Minister who does not comprehend the meaning of the word ‘honesty’ and who breaks his own word time after time. He is the problem we have in our country today and until he resigns or is voted out of power, nothing will change and Pakistan will continue to go from bad to worse.

Not that the previous government was much better, though the problem with that one was overall rather than being concentrated in the head. Under this duopoly of the PPP and the PMLN, Pakistan has been turned into one of the most blood-soaked and blood-drenched nations in the world where lawlessness and terrorism hold sway and where human blood is the currency.

Each time a precious soul is snuffed out and a life is cut short by the extremist, whether that person be a Sunni or a Shia, or a Christian or an Ahmadi, or a Hindu, it takes something away from our collective humanity and it wounds our nation’s soul. Worse still, it lessens us before the whole world and corroborates the truth that our country has been turned into a human abattoir and slaughterhouse where, no matter how many innocents are murdered, no one truly cares any longer. Now we see such carnage as a norm that we must just accept and live with. We have accepted it as our ‘’lot in life.’’

It is only in Pakistan that a terrorist organisation can kill tens of thousands of its citizens in the most brutal, violent and atrocious manner and yet many senior members of the ruling party still feel comfortable and safe with calling them their `brothers’ and `freedom fighters’. What a terrible insult this is on the Pakistani people and what a bitter pill to swallow for the family members of all those that have been killed in the last ten years by these terrorists. What a disgraceful and insensitive set of leaders we have and what an apathetic and insensible followership who are not prepared to call their leaders to order and keep them on their toes and who have absolutely no empathy with or sympathy for the common citizens of the country they rule and plunder. The truth is that we as a people have lost all sense of compassion and civility when it comes to such matters and our feelings and conscience have become dry as a bone. To the majority of Pakistanis, those precious souls and compatriots that have been killed by the TTP and LEJ over the last ten years are just a number – they are nothing but distant names, from a far-away place, belonging to remote figures. There is simply no sense of national outrage from our people about this insidious rebellion and about these brutal killings and vicious attacks and neither is there any sense of urgency on the part of our government to bring it to an end. Given the way our government conducts itself, one would not have thought that Pakistan is currently enmeshed in a brutal war against terror.

Yet as we go on with our day to day business and act as if all is well, thousands are being killed in our country by the Islamist extremists. Such heartlessness and coldness to the plight of others has taken firm root in the Pakistan of today. What a monumental tragedy this is. We do not care any longer. We laugh and mock when the aggrieved people of Minhaj ul Quran demonstrate to demand justice. When did we, as a people, degenerate to this abysmal level of lack of empathy?

As millions of Pakistanis celebrated the Independence Day last week, I hope that they found it in their hearts to spare a thought and say a little prayer for those whose loved ones were not with them on that day, or, indeed, on any other day, simply because they had been murdered by the extremists and those who were slaughtered in cold blood by the Sharifs in Lahore.