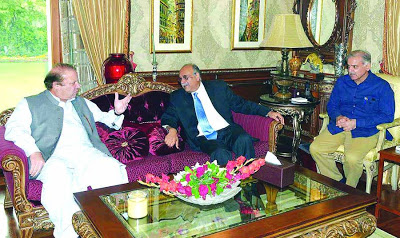 Najam Sethi has published two articles in his own The Friday Times and in Jang where he is employed as a Geo anchor. These two articles are one; the same material has been published in English and Urdu. This shows the urgency, if not desperation, on the part of Sethi and Jang to propagate their views to as wider a publics as possible.

Sethi gives a new name to the Pakistan Army-ISI. They are usually referred to the Establishment, but Sethi thinks they are Miltablishment. There is no problem here. He can call them anything. But it is his claim which arises curiosity. He claims that both Khan and Qadri have been working for the Army-ISI to topple Nawaz Sharif’s democratically government. Sethi’s logic is that the Army-ISI is losing control of its long-held monopoly over issues such as the “National security” and now is desperate to weaken Nawaz Sharif in order to stay strong itself.

Khan and Qadri may be the Arm-ISI agents. But what about the Sharif Brothers? They are part of the bloody legacy of General Zia. Both of them owe their political existence and suucess to the Army-ISI. Worse, the Sharif Brother act like Saudi agents against the interests of Pakistan. They are patronized by the Saudis and have done all they can and could to facilitate Saudi-Salafi Takfiri ideology in Pakistan. Today, the blasphemy issue has turned Pakistan into a slaughterhouse. It was no other than Nawaz Shairf who introduced the dreaded Blasphemy Law in Pakistan in 1992. Nawaz Sharif ensured that a blasphemer would be sentenced to death. Najam Sethi does not refer to this fact. Certainly, he can say that it is not relevant. But it is.

According to Sethi, Nawaz Sharif today is not the Nawaz Sharif of yesterday. He is recycling the electoral slogan of Nawaz League pedaled by Muslim League ideologues-journalists. New Nawaz Sharif: As if he had had many parts removed and new parts installed instead!

Sethi’s glorification of the “New” Nawaz Sharif is that he has taken on the Army-ISI. Sethi claims that the Army-ISI is scared of him because he is wresting control of issues like the National Security from the generals. This claim has no substance. Nawaz Sharif since taking over in 2013 has done noting noticeable. He has not even regularly attended parliamentary sessions for which he has been criticized by the lawmakers. He has not, despite is incessant pre-election promises, even added a single megawatt to Pakistan’s electricity pool. Yet Sethi thunders: ‘This’ Nawaz Sharif of 2013 is not ‘That” Nawaz Sharif of 1993.

But for those who have seen how he has been functioning in his new skin, ‘This’ Nawaz Sharif continues to be the same, old bloke. Before he was a myrmidon of the general; now he serves the Takfiri House of Saud.

Jang/Geo stands for the freedom of expression

Unless it was a joke, it is evidence of the moral corruption of Sethi’s journalese. The word Sethi uses is “hamstrung”. Jang is so devoted, in Sethi’s fantastic imagination, to the independence of journalism and freedom of expression that it is “hamstrung” by it, i.e., in its principled pursuit of honesty, Jang has harmed itself.

The Jang Group in its various incarnations such as Geo, Jang, and The News has been the best friend of Takfiri Deobandis who are responsible for thousands of Pakistanis in the name of religion. Mullah Ahmad Ludhianvi, the man leading the Shia genocide in Pakistan, is a respected VIP in the Jang/Geo world. Sethi has personally hosted him on his own show on Geo. Jang/Geo is filled with Deobandi journalists who have never condemned Deobandi terrorism against non-Deobandi Pakistanis. Sethi has personally given Mullah Ludhianvi ample opportunities to demonize Shias and justify their genocide.

The Army-ISI, says Sethi, are helpless because they cannot topple the “New” Nawaz Sharif. Thus, the generals have devised the Kiyani plan to undermine him. By Kiyani, Sethi refers to how General Kiyani, Justice Iftikhhar Chaudhry, and Nawaz Sharif ganged up against President Zardari to weaken him. Yes, it is the same “New” Nawaz Sharif whom Sethi wants to protect against the ploy he himself used an elected government and an elected president. There is no word of condemnation of Nawaz Sharif for undermining democracy when Zardari was ruling. However, Sethi would not let it happen now that the “New” Nawaz Sharif is ruling.

For Sethi democracy is sacrosanct and must not be derailed. By this, he definitely means democracy as long as and only if the Sharif Brothers are ruling. Otherwise, his favorite Shahbaz Sharif is allowed to say, “I refuse to accept as my president!” and threaten, “I will hang Zardari outside Bhatti Gate, Lahore”’!”