There are times frequently seen is the phenomena of ” Moral Predicament”.Those who lack moral credibility and right to Govern, will use such arguments.

We see this uses today by corrupt agenda driven  journalists like Hamid Mir, Najam Sethi and the Geo group in unison with Takfiri Deobandi Terrorists like Ahmad Lidhanvi and the rest of JUI clergy who have a vested interest with Nawaz Sharif.

An opposing party that is simply opposing on issues is slandered and chastised for an act of ethical and moral compromise, (such as the Canadian citizenship of  Tahir ul Qadri, https://lubpak.com/archives/320316).

Coupling with the reason or narrative of the opponent now has a moral dilemma to answer before the real issue maybe addressed. This is a tactful distraction and obfuscation technique and produces dilution in the opposing narrative, used by agenda driven guns for hire journalists of money driven “news groups” like Geo. (https://lubpak.com/archives/320510).

During the Referendum of General Haq the referendum had questions along the same line. If the voter was to support Islam he should vote for Ziad Ul Haq. 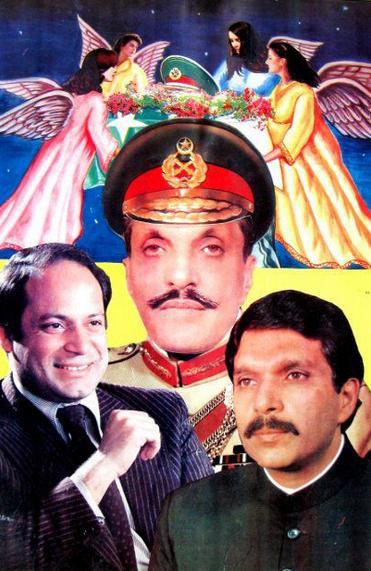 The same psychological operation of Pakistani public is in play robustly and blatantly. PAT and PTI claim against the present government is based on failure of governance, symbolic constitution practice, insincerity, corruption above all the claim with reliable proof of illegitimate 2013 election victory of the PMLN, which no court will hear. Both PTI and PAT have given concrete proof of the need for present discourse because they have no place else to take their grievances, in this Democratic government of PMLN.

Moral Dilemma has been very effectively created by PMLN against those who oppose them by calling their intentions against Democracy.

Extremely poor governance and severe law an order situation with crippled economy and corruption at it worse and a situation where a victim does not even have rights to FIR without government approval is not a democracy.

It is PMLN who refused to face public in the Court, now challenged on the streets is using the mantra of Saving Democracy the Moral Dilema.

This has become so effective narritive that even the educated and Liberals of Pakistani community have swallowed and continue to regurgitate, asking for justification from PAT and PTI for their immoral act of destroying Democracy which somehow justifies all illegitimate acts of PMLN. The completely disfunction condition of the Democracy and absolute illegitimate process of obtaining this Democracy is out of bound and questioning. If the Ousting of (so called Democracy) of PMLN is a moral dilemma than what do call supporting and enabling the worse possible Democracy that is destroying the country and delaying justice of proving the electoral process legitimacy. A question that begs an answer from those who are questing PAT and PTI about the morality of saving the Democracy.