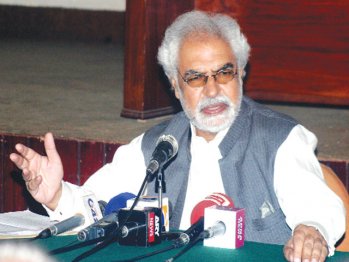 Ayaz Amir has deserted the Good Liberal Club of Pakistan. In this club, membership privileges are based on one’s ability to suck up to other liberals. Being a Good Liberal means never having to develop your own thinking but lapping up the “chirpings” of other Good Liberals like Najam Sethi.

Being a Good Liberal means taking False Neutral positions and equating Anti Taliban Tahir ul Qadri with the same Taliban whom he has denounced at various levels. Being a Good Liberal means aligning with and sucking up to Anti Ahmadi Anti Shia Deobandi clerics like Tahir Ashrafi while cursing, abusing and mocking anti Taliban Sunni clerics like Tahir ul Qadri.

“Another under-appreciated point about PAT and its allies in the Sunni Ittehad Council and the Majlis Wahdat-ul-Muslimeen (the leading Shiite political party) is that together they represent the moderate, liberal Islam of the overwhelming majority of the Pakistani people. This Islam, the Islam of Bulleh Shah, Shah Hussain, Ghulam Farid and the great Ali Hajveri, patron saint of Lahore, is anti-Taliban Islam, anti-Takfiri Islam. For too long this Islam was relegated to the political sidelines because it lacked a political voice. The Sheikh-ul-Islam, after a lifetime of preparation, has given it that voice.

The fight against the Taliban is not just a military struggle. It is also an ideological struggle between moderate and Takfiri Islam. The army can use its tanks and guns but for all-out victory, for success on the ideological front, for Pakistan to return to its moorings, there has to be a meeting of minds between the army and moderate Islam. And if there is such an understanding, conscious or otherwise, Pakistan will never go the way of Iraq or Syria. No Salafi brand of fitna (discord) can arise on its soil.”