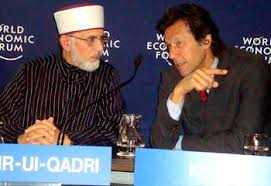 Pro PML N liberals echo Sipah-e-Sahaba’s concerns about Tahir ul Qadri being a Foreign Agent. For Liberals Tahir ul Qadri wants to import the Canadian Maple Leaf Brand of Theocracy while for Sipah Sahaba aka ASWJ, Tahir ul Qadri is hated simply for tolerating Shias on the same stage as him. For Nawaz Sharif, Tahir ul Qadri’s Maple Leaf Agenda is very Dangerous for the Raiwind Project which seeks to turn Pakistan into a Saudi slave colony.

Imran Khan has better Hair implants than the Sharif brothers and is more into Fitness than Sri Payae – a Big negative for the Hajjaji.

Nawaz Sharif has most of the Pro Taliban Judges either in his pocket or related via Gene pool; especially the Former Chief Justice PCO Chaudhary who can always be relied upon for a good Hatchet Job. His son, Abu Arsalan, is also a Great Fixer of things Corporate and Legal.

While Nawaz Sharif can Bat excellently under Rigged conditions, Imran Khan is good for a Short Fast Spell of bowling.

Imran Khan does not have much experience in deposing an elected Prime Minister while Nawaz Sharif is a master at this tactic. From 1990 to 2012, Nawaz Sharif has played a central role in deposing 3 Prime Ministers with the help of many Army Chiefs and Chief Justices. During this time, he has assembled a team of All Star Hatchet Men like PCO Chaudhary, Ramday, Najam Sethi.

Nawaz Sharif has also earned the Gratitude of the Taliban with his best efforts to delay the Army action against them as long as he could. It came to a point where General Raheel Sharif just had to start on his own. But not before giving ample time to let as many Taliban escape North Waziristan as he could. For this service for the Taliban and for allowing the Saudis to rape the ecology of Pakistan, Nawaz Sharif has earned many Brownie points from his masters.

While Nawaz Sharif has the services of sophisticated Hatchet Men like Najam Sethi, Imran Khan is left with more cruder versions like Mubasher Luqman.

Meanwhile Big Boss Bilawal is organizing the next Fashion show -on twitter – in some old Lahore Haveli – part of the PPP strategy to take back Punjab. Zardari is busy hiring more Legal help for the Witch Hunting by Nawaz Sharif which is likely to resume once the current crisis is dodged with help from the Supreme Court