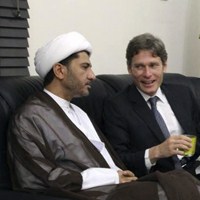 The fallout from Bahrain’s expulsion of Tom Malinowski, the U.S. assistant secretary of state for democracy, human rights and labor, illustrates the continuing political impasse in this deeply polarized U.S. ally in the Persian Gulf. While the danger to the ruling Al Khalifa family posed by the 2011 popular uprising has long passed, positions on all sides have hardened, with little prospect of any political settlement to Bahrain’s deep-rooted inequalities. A fragile stasis has instead developed between a Bahraini government unwilling to make meaningful political concessions and a fragmented opposition unable to mount a serious challenge to the status quo.

Malinowski was declared persona non grata and ordered to leave Bahrain on July 7, a day after meeting with leaders of Al-Wefaq, the main Shiite Islamist opposition group, at the U.S. Embassy in Manama. Malinowski met with Al-Wefaq leader Sheikh Ali Salman and his deputy, Khalil al-Marzooq, without a Bahraini government official present, and was promptly accused of flouting a September 2013 ruling requiring a Foreign Ministry representative to attend all such meetings. In the days that followed, Ali Salman and al-Marzooq were charged with violating Bahrain’s law on political associations. The Ministry of Justice subsequently filed a lawsuit against Al-Wefaq seeking a three-month suspension of its activities, on the grounds of procedural irregularities in the group’s internal decision-making processes.