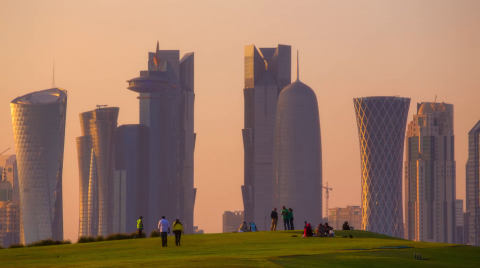 Qatar recently cemented an enormous weapons deal with the United States. But this week, the tiny, resource-rich Gulf kingdom with outsized geopolitical ambitions — and a seemingly bottomless pocketbook — might be setting itself up for more problematic relations with the U.S.

Last week, Qatar closed the largest sale of American weaponry so far this year, purchasing $11 billion worth of Patriot missile batteries and Apache attack helicopters. The sale revealed that Qatar hasn’t exactly been lacking in strategic daring in the wake of its failed bet on Muslim Brotherhood-linked political movements throughout the Middle East, and its subsequent fallout in diplomatic relations with neighboring Gulf monarchies.

But the Gaza-Hamas conflagration casts a problematic light on the Qataris, who have been one of Hamas’s most reliable international partners.

Then-Qatari Emir Sheikh Hamad bin Khalifa al-Thani made the first official visit to Hamas-controlled Gaza of any head of state in October of 2012. During the visit, he pledged over $400 million in assistance to the territory, and some significant but currently-unknown amount of that money has ended up in Hamas’s pocket.

Jonathan Schanzer, the vice president for research at the Foundation for Defense of Democracies, told Business Insider that Qatar is “believed to be the primary financier of Hamas,” which has estimated annual operating expenses of around $1 billion.

In June, Qatar attempted to transfer money for civil service salaries for Gaza-based Hamas members through the Arab Bank, a transaction that the Bank disallowed under reported U.S. pressure.

Hamas’s apparent hard-line position in its latest confrontation with Israel is a partial function of Qatari support, as the emirate is the financial underwriter for the militant group’s policies and hosts several of its top leaders. Just today, Hamas leader Khaled Meshaal said in a Doha press conference — carried in its entirety on Qatari-funded Al Jazeera’s Arabic channel — that Egypt would have to open the Rafah border crossing as a condition for his group would agree to a ceasefire. It’s a request that Egypt is unlikely to agree to, especially given an earlier Hamas demand that the border crossing effectively be taken out of Egyptian control, and placed under the purview of “friendly Arab governments.”

Qatar is arguably a counter-productive actor in the context of the biggest Israeli-Palestinian crisis since the Second Intifada of a decade ago. And it’s a major purchaser of U.S. arms, a country that’s been able to maintain favor with the U.S.

David Weinberg, a scholar who also studies the Gulf states at the Foundation for Defense of Democracies, told Business Insider by email that Congress hasn’t been concerned enough with Qatar’s policies to put a hold on weapons sales, and confirmed the Obama administration’s recent nominee as ambassador to Doha without controversy.

“It’s not clear whether Congress has the stomach for a fight over these issues with an ostensible ally when so much seems to be going wrong elsewhere in the Middle East and when the administration seems to be vouching for Qatari conduct,” wrote Weinberg by email last week, when the Hamas-Israel escalation was at a far different stage.

At this point, nearly 700 Palestinians and 34 Israelis have been killed in the conflict. Hamas has achieved battlefield objectives — like the successful targeting of Israel’s international airport, and deadly attacks inside Israeli territory — that dictate against an immediate resolution.

And as the situation gets worse, it’s possible that American lawmakers, some of whom are already wary of Qatari influence in the region, could start thinking about holding them accountable.