Home  »  Newspaper Articles   »   Why can’t Iran and Israel be friends? – by Navid Hassibi 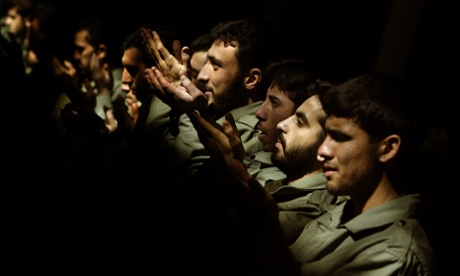 There has been much talk this month about subtle Iranian-Israeli overtures, sparking speculations in policy circles about the possibility of a thaw in relations between Tehran and Tel Aviv. While these speculations are premature and flirt with wishful thinking, it makes geostrategic sense for the two adversaries to set aside their mutual hostility to address common concerns in the Middle East.

It all began in Abu Dhabi in mid-January at the International Renewable Energy Agency’s annual assembly, which included delegations from Iran and Israel led by their respective energy ministers. While Arab states that regularly, if unofficially, interact with Israel such as Kuwait boycotted the assembly due to their official Israeli non-recognition, Iran attended, and energy minister Hamid Chitchian even remained at the table when his Israeli counterpart, Silvan Shalom, spoke. As Middle Eastern affairs expert Meir Javedanfar noted, “No Iranian delegate would dare take such a risk without clearance from the very top.”

The favour may have been returned at the Munich security conference in early February when Israel’s defence minister, Moshe Ya’alon, remained in his seat to listen to foreign minister Mohammad Javad Zarif of Iran. This was in stark contrast to the United Nations general assembly last September, when the Iranian and Israeli delegations boycotted each other’s speeches. The day after the security meeting ended, Zarif gave an interview to a German broadcaster in which he acknowledged the Holocaust and described it as a “horrifying tragedy.” (President Hassan Rouhani had similarly condemned the Nazi genocide of European Jews while in New York for the general assembly.) Zarif added that if the Palestinian-Israeli issue were to be resolved, Iran would consider recognising Israel. Apparently under pressure from hardliners back home, he later claimed that his comments had been distorted.

These gestures come as Iran has been redefining its international image after years of incendiary anti-Israeli rhetoric from the Ahmadinejad administration. In September, Rouhani and Zarif wished Jews around the world a happy Rosh Hashanah, and earlier this month the Iranian government made a gift worth hundreds of thousands of pounds to a Jewish hospital in Tehran.

An Iranian-Israeli rapprochement is not unprecedented. During the shah’s reign, the two countries enjoyed a geostrategic working relationship involving intelligence and security cooperation, an energy alliance – including the Israeli import of Iranian oil – and common positions on the threats posed by the Soviet Union and pan-Arabism. Hard as it is to imagine, revolutionary Iran continued to cooperate with Israel during much of the 1980s and 1990s despite the mutually bellicose rhetoric out of Tehran and Tel Aviv. Israel supported the Islamic republic with arms during its war with Saddam Hussein’s Iraq.

In the late 1990s, a group of Israeli agricultural experts reportedly visited Iran for a secret meeting with its deputy minister of agriculture. Around this time, the two countries also allegedly began to renegotiate Israel’s $1 billion debt to Iran. Tehran even allowed Israeli experts to visit areas damaged by the 2003 earthquake in Bam, as much of the infrastructure there was built by Israeli firms before the Islamic revolution.

Clearly, there is a track record of Iranian-Israeli cooperation regardless of the politics and rhetoric that have weighed against it. Although Binyamin Netanyahu has been vociferous in addressing the perceived Iranian threat to Israel, during his first term as prime minister in the late 1990s he evidently sent signals that he was interested in dialogue with Tehran. Likewise, in 2003, Iranian supreme leader Ayatollah Ali Khamenei approved an intended grand bargain with the US – rebuffed by the Bush administration – under which Iran would have recognised a two-state solution to the Israeli-Palestinian issue.

The geostrategic setting in the Middle East is once again favourable to an Iranian-Israeli rapprochement, whether overt or sub rosa. In contrast, the turmoil in Syria and the proxy battle with Saudi Arabia highlights the deep enmity between Tehran and its longstanding rival, Riyadh. This has been highlighted by former US ambassador Frederic Hof, who recently revealed that Iranian officials told him that Iran was not in conflict with the United States or Israel but rather sees Saudi Arabia as its main adversary. Tehran has thus been seeking to counter Saudi influence in the region by repairing relationships that have deteriorated over the years, such as the one with Turkey, which feels similarly threatened by growing regional sectarianism. Also working to repair its ties with the United Arab Emirates, Iran is purportedly negotiating a solution to long-running disputes over a group of small islands in the Persian Gulf.

Compounded by Iran’s already close ties with Iraq and Oman, Saudi Arabia is being diplomatically out maneuvered and encircled by the Islamic republic. Even the November nuclear deal in Geneva with the so-called P5+1 can be seen as enhancing Iran’s regional status to the detriment of Saudi Arabia, which has threatened to distance itself from the United States over the apparent Washington-Tehran thaw. By reestablishing strategic cooperation with Israel, Iran can refocus its attention closer to home without fearing imminent Israeli military action and can carve away at the sole major issue bridging Israel and Saudi Arabia, the perceived Iranian threat.

As I have argued previously, Saudi Arabia and Israel have less in common than do Iran and Israel, which share much in the way of culture and history, and are linked through Iranian-Israeli Jewry. In fact, Iran is home to the largest Jewish community in the Middle East outside Israel and there are believed to be more 200,000 Iranian Jews presently living in Israel.

In Israel’s case, it can benefit from cooperation with Iran, particularly as the region is under threat of growing extremism by fundamentalist Wahhabi fighters who despise Shiites and Jews alike. Furthermore, a détente with Tehran would likely remove the threat posed by Hezbollah in southern Lebanon, which acts as a deterrent against possible Israeli military action on Iran, much like Israel’s nuclear submarines act as a deterrent against Iran in the Persian Gulf. It could also positively affect Israeli-Palestinian peace talks and hedge against threats by Hamas and Islamic Jihad in the Palestinian territories.

Iran and Israel must seize the current opportunity, look beyond their political differences and let their national interests guide them to deal together with shared regional concerns. The two have cooperated in the past, and the time is right for them to do so once again.