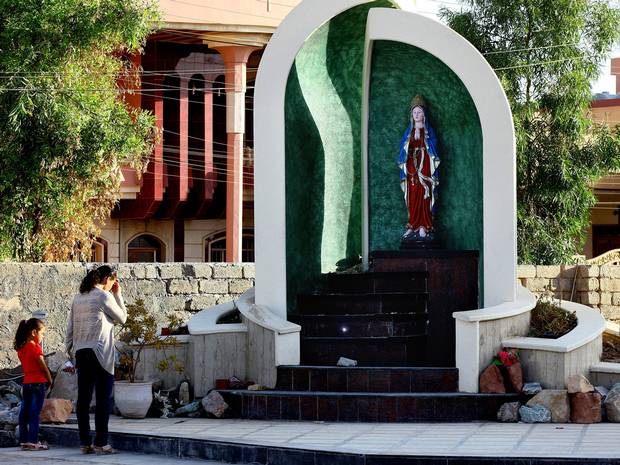 For three years, the Arab revolutions cast “Palestine” and Palestinians to the fringe of memory in the Middle East. And now the new bloodbath in Gaza has pushed to the corner of our consciousness the continuing tragedy of the Christian exodus.

As the Christians of Mosul fled their cruel, new “Wahabi/Deobandi Caliphate”, photographs of the city’s Syriac-Catholic church, fire blazing from its windows, only made inside pages in the Middle East press.

That two of the world’s most-hated, born-again Christians – George W Bush is one and the other, a British citizen, is unmentionable – should have destroyed one of the oldest Christian communities in the lands of Christ, remains a most brutally ironic testament to their folly.

Both, of course, would no more acknowledge this today than the Christians of the Middle East can ignore it.

And inevitably, the Christians in the great cities lying between the Tigris and the Mediterranean are asking why no Muslims are condemning their tragedy.

“What are the moderate Muslims saying?” the Lebanese Catholic Maronite Patriarch, Bechara Rai, asked acidly last week. “We do not hear the voices of those who denounce this.”

Indeed not. The Caliphate’s threat to the Christians – convert, be taxed or die – contradict, in the words of the Chaldean Patriarch, Archbishop Louis Sako,  “1,400 years of history and of the life of the Muslim world and of coexistence between different religions and different peoples”. Archbishop Sako spoke, too, this week of how Iraq itself had become a “humanitarian, cultural and historical catastrophe”. But he added that Christians in the region must remember that the Koran demands respect for minorities and that the Christian people must also remain respectful to Muslims and show “patience and endurance”. Which, I would have thought, might be turning the other saintly cheek a bit too far.

But of course, the new Caliph of Mosul has applied restrictions to all Shia Muslims as well as the Yezidis, the Sabeans and the Turkomens. And there have been street demonstrations in Beirut just last week – jointly, by Muslims and Christians – to both condemn the treatment of the Christians of Mosul and the Palestinians of Gaza.

Religions may be different, was the message, but both the Christians and Muslims of the Middle East are Arabs.

Now of course, it’s not difficult to see where the Christians have made political mistakes in the Middle East. Many Copts in Egypt supported the regime of President Hosni Mubarak when it was clear that the revolution would overwhelm him. And the Copts were also rather too quick to line up alongside Abdel Fattah al-Sisi when Egypt’s Field Marshal/President decided to destroy the Muslim Brotherhood.

Far too many of Lebanon’s Christian families aligned themselves with the Crusaders in the 11th century and far too many Christians fought each other as well as their Muslim, Druze and Palestinian brothers in the 1975-90 Lebanese civil war. In Syria today, the Christians accept the Assad regime – as surely they must when they can see the Caliphate spreading its laws through the Syrian city of Raqaa. Even the dead of the 1915 Armenian genocide (Christians too, remember) have not been spared; the church housing their bones in Deir el-Zour has been damaged. And I recall seeing with my own eyes the burned bibles and knife-ripped paintings in the church at Yabroud, just north of Damascus. I took some samples and showed them to lecture audiences in America and Europe – and in the Arab Gulf. I did not do so to suggest that Bashar al-Assad was a highly-enlightened man – but to show them what America’s great ally, Saudi Arabia, is doing.

For the Saudis lie behind this vast new force of the Caliphate, whose Islamist rulers have brought some of their Iraqi military assets – courtesy of George W again – to Syria and are now giving the Syrian army a tougher fight. Before the Caliphate spread to Mosul, the Syrian army was winning, or at least not losing. Now their soldiers are being executed, just like the Iraqi Shia army units captured near Mosul. And, of course, we continue to buttress this savagery in Syria while we loudly condemn the very same groups which are now ruling Mosul and threatening “democratic” Iraq. Saudi Arabia continues to fund the Wahabis among the Sunni forces while we continue to protect the Saudis, to shield them from all criticism, just as we did when 15 of the 9/11 hijackers turned out to be Saudis, just as we did when they funded the Taliban.

Even in north-eastern Lebanon now, there are hidden Isis dangers. The Lebanese army, the only institution in the state which really works, has stationed men and equipment around the town of Ersal where many of the rebels against Assad have taken shelter. The Syrian army, when it stormed into Yabroud this year, effectively cut them off from Syrian territory. But if the Syrian military lose ground in the mountains south of Homs, then Isis forces might try to link up with Ersal and Isis would then be able to boast that its early title – The Islamist Army of Iraq and the Levant – had come true.

Of course, we can comfort ourselves that the new Caliphate-regime is too crackpot to survive. Probably. But didn’t some people say exactly that when Ayatollah Khomeini flew back to Tehran, and when our favourite dictators took over the Middle East? Didn’t we used to call Gaddafi a crackpot? And didn’t he rule for quite a long time? The Christians of the Middle East don’t, therefore, take much comfort in this sort of jolly assumption. For if Isis has its rump north of Baghdad and its body across Syria, what happens when, even from the Lebanese border, its teeth can be heard snapping just a few miles from  the Mediterranean?