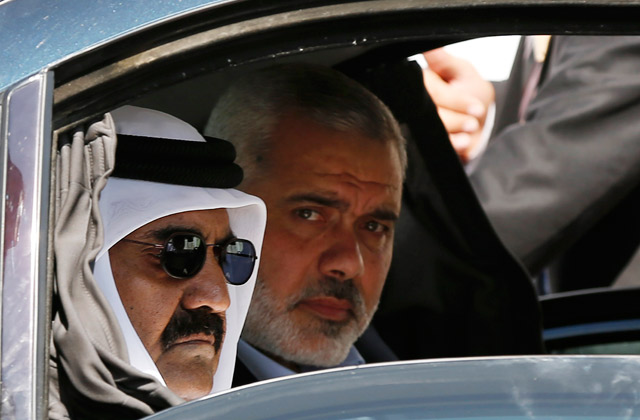 David Cohen, the Treasury Department Under Secretary for Terrorism and Financial Intelligence, has stated for the record what no other U.S. official would: Qatar and Kuwait, two supposed “allies” of the U.S., are facilitating Islamist terrorism and extremism.

Last month, Cohen spoke at a think tank and immediately turned to Qatar after discussing Iran’s state sponsorship of terrorism.

“Qatar, a longtime U.S. ally, has for many years openly financed Hamas, a group that continues to undermine regional stability. Press reports indicate that the Qatari government is also supporting extremist groups operating in Syria,” he said.

Qatar’s staunch backing of the Muslim Brotherhood and Hamas has alienated its Arab neighbors that view them as terrorist organizations. The leader of the Palestinian Islamic Jihad traveled to Qatar to meet with Hamas leader Khaled Meshaal. Qatar appears to have helped heal the relationship between Iran and Hamas.

In August, 24 members of Congress confronted Qatar over its relationship with Hamas. The Qatari government subsidizes the spread of Islamism around the world, even in downtown Washington D.C.

The Qatari government is also guilty of helping Al Qaeda’s regional affiliates. Cohen pointed out that the Treasury Department sanctioned a terrorist in December named Abd al-Rahman bin Umayr al-Nu’aymi, who raises money in Qatar and channels it to Al Qaeda elements in Syria, Yemen, Somalia and Iraq.

He managed the movement of over $2 million every single month to Al Qaeda in Iraq at one point and delivered the terrorists’ messages to media outlets from 2003-2004. This means that Qatar, a U.S. “ally,” has the blood of American soldiers in Iraq on its hands.

In 2012, al-Nu’aymi transferred about $250,000 to two leaders of Al Shabaab, Al Qaeda’s affiliate in Somalia. This affiliate has proven to be effective in recruiting Americans, making it a major threat to the U.S. homeland. He also financed a charity used as a front by the Yemen-based Al Qaeda in the Arabian Peninsula that has directly targeted the U.S. homeland.

Qatar is also a major backer of the Muslim Brotherhood and other Islamist groups in Syria. The Qatari regime does not directly support Al Qaeda there, but the Salafist groups it supports collaborate with Al Qaeda on the battlefield against their common enemies. An Arab diplomat toldReuters that Qatar and Turkey support certain Islamist rebels to compete with Saudi Arabia’s own Islamist rebel friends in Syria.

“[T]his is what Qatar does: They gain the confidence of powerful extremist groups which they believe gives them a diplomatic edge over any other country,” the unnamed diplomat said.

“Our ally Kuwait has become the epicenter of fundraising for terrorist groups in Syria,” he said.

Cohen mentioned that an extremist named Nayef Al-Ajmi was appointed to the posts of Minister of Justice and Minister of Islamic Endowments. He’s so pro-jihadist that his face appears on fundraising posters for Al Qaeda’s affiliate in Syria, Jabhat al-Nusra.

Al-Ajmi’s resume includes being a Salafist member of Kuwait’s parliament and the assistant dean of Kuwait University’s College of Sharia and Islamic Studies, a position that gives him the power to help shape the next generation. He was on the sharia supervisory boards of several investment corporations, giving him an opportunity to direct funds towards sharia-compliant, jihad-supporting entities.

In November 2011, he was seen on Kuwaiti television where he stated:

“Servants of Allah, let us be aware that our struggle with the Jews is one of faith, identity and existence. Read the Koran, where Allah says: ‘Never will the Jews or the Christians be satisfied with you until you follow their creed,’ so that you may know what the Jews conceal within their hearts.”

He also preached, “Brothers and sisters, you should read history books, so you my know the history of this people, and so you may know that the Jews of the past were evil, and the Jews of today are even worse.”

Al-Ajmi also taught that Jews are “the scum of mankind” and their ancestors were “transformed into pigs and apes” by Allah.

Roughly two years later, the Kuwaiti government made him the Minister of Islamic Endowments and Minister of Justice.

Cohen’s discussion of Al-Ajmi resulted in a much-needed public discussion. A member of Kuwait’s parliament threw down the gauntlet, demanding, “We expect the minister to either hand in his resignation immediately or reject the accusations and sue the U.S. official. Lapsing into silence will only fuel speculation and doubt.”

Al-Ajmi submitted his resignation, supposedly for health reasons, shortly after Cohen made his comments. The Kuwaiti press reported that his resignation was not accepted and he will continue serving. Whatever the case is, the fact that the Kuwaiti government would have such a radical in two senior positions is shocking behavior for an “ally.”

Kuwait has yet to pick a side among the three alliances that now make up the Middle East. On the one hand, Kuwait gave financial aid to Egypt after the Muslim Brotherhood was overthrown. On the other hand, it was the  first country to deny Egypt’s request to ban the Brotherhood as a terrorist group.

“The Saudis are restructuring their post-Arab Spring alliances, reviving the ‘moderate bloc’ of Jordan, Morocco, Egypt, Bahrain, UAE [United Arab Emirates] and others, and the Iranians are rebuilding their ‘resistance and resilience bloc’ that was brought together before 2011—Syria, Qatar, Turkey, and their resistances in Lebanon and Palestine.”

Kuwaiti and Qatari duplicity is not new. In 2009, Secretary of State Hillary Clinton signed a memo complaining about how terrorists are being financed via Kuwait, Qatar, Saudi Arabia and the United Arab Emirates.

Kuwait was mentioned as a “key transit point” for Al Qaeda money and its government refused to ban a charity named the Revival of Islamic Heritage Society even though the U.S. sanctioned it for its Al Qaeda links.

As for Qatar, the State Department memo said its counter-terrorism cooperation is “considered the worst in the region.”

Yet, Qatar just signed arms deals worth $23 billion, including $7.6 billion in purchases from the U.S. Other suppliers include Turkey, France, Germany and China. The American taxpayer is also paying for the spread of Islamism by Turkey and Qatar as part of a counter-extremism initiative.

Consider the actions of “allies” like Qatar, Kuwait, Turkey and Pakistan and how gently the U.S. has responded.

The message the West is delivering is that once you’re an ally, you’re always an ally — even if you help our adversaries.