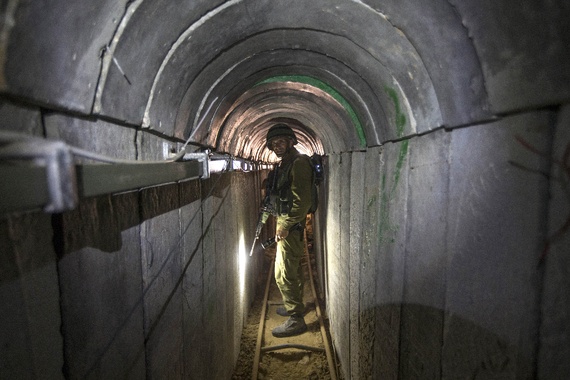 An Israeli officer in a Hamas tunnel (Jack Guez/Reuters)

Things change, of course—the only constant in the Middle East is sudden and dramatic change—but as I write it seems as if Israel is losing the war in Gaza, even as it wins the battle against Hamas’s rocket arsenal, and even as it destroys the tunnels meant to convey terrorists underground to Israel (and to carry Israeli hostages back to Gaza).

This is not the first time Israel has found itself losing on the battlefield of perception. Why is it happening again? Here are five possible reasons:

1. In a fight between a state actor and a non-state actor, the non-state actor can win merely by surviving. The party with tanks and planes is expected to win; the non-state group merely has to stay alive in order to declare victory. In a completely decontextualized, emotion-driven environment, Hamas can portray itself as the besieged upstart, even when it is the party that rejects ceasefires, and in particular because it is skilled at preventing journalists from documenting the activities of its armed wing. (I am differentiating here between Hamas’s leadership and Gaza’s civilians, who are genuinely besieged, from all directions.)

2. Hamas’s strategy is to bait Israel into killing Palestinian civilians, and Israel usually takes the bait. This time, because of the cautious nature of its prime minister, Israel waited longer than usual before succumbing to the temptation of bait-taking, but it took it all the same. (As I’ve written, the seemingly miraculous Iron Dome anti-rocket system could have provided Israel with the space to be more patient than it was.) Hamas’s principal goal is killing Jews, and it is very good at this (for those who have forgotten about Hamas’s achievements in this area, here is a reminder, and also here and here), but it knows that it advances its own (perverse) narrative even more when it induces Israel to kill Palestinian civilians. This tactic would not work if the world understood this, and rejected it. But in the main, it doesn’t. Why people don’t see the cynicism at the heart of terrorist groups like Hamas is a bit of a mystery. Here is The Washington Post on the subject:

The depravity of Hamas’s strategy seems lost on much of the outside world, which — following the terrorists’ script — blames Israel for the civilian casualties it inflicts while attempting to destroy the tunnels. While children die in strikes against the military infrastructure that Hamas’s leaders deliberately placed in and among homes, those leaders remain safe in their own tunnels. There they continue to reject cease-fire proposals, instead outlining a long list of unacceptable demands.

2. People talk a lot about the Jewish lobby. But the worldwide Muslim lobby is bigger, comprising, among other components, 54 Muslim-majority states in the United Nations. Many Muslims naturally sympathize with the Palestinian cause. They make their voices heard, and they help shape a global anti-Israel narrative, in particular by focusing relentlessly on Gaza to the exclusion of conflicts in which Muslims are being killed in even greater numbers, but by Muslims (I wrote about this phenomenon here).

3. If you’ve spent any time these past few weeks on Twitter, or in Paris, you know that anti-Semitism is another source of Israel’s international isolation. One of the notable features of this war, brought to light by the ubiquity and accessibility of social media, is the open, unabashed expression of vitriolic Jew-hatred. Anti-Semitism has been with us for more than 2,000 years; it is an ineradicable and shape-shifting virus. The reaction to the Gaza war—from the Turkish prime minister, who compared Israel’s behavior unfavorably to that of Hitler’s, to the Lebanese journalist who demanded the nuclear eradication of Israel, to, of course, the anti-Jewish riots in France—is a reminder that much of the world is not opposed to Israel because of its settlement policy, but because it is a Jewish country.

4. Israel’s political leadership has done little in recent years to make their cause seem appealing. It is impossible to convince a Judeophobe that Israel can do anything good or useful, short of collective suicide. But there are millions of people of good will across the world who look at the decision-making of Israel’s government and ask themselves if this is a country doing all it can do to bring about peace and tranquility in its region. Hamas is a theocratic fascist cult committed to the obliteration of Israel. But it doesn’t represent all Palestinians. Polls suggest that it may very well not represent all of the Palestinians in Gaza. There is a spectrum of Palestinian opinion, just as there is a spectrum of Jewish opinion.

I don’t know if the majority of Palestinians would ultimately agree to a two-state solution. But I do know that Israel, while combating the extremists, could do a great deal more to buttress the moderates. This would mean, in practical terms, working as hard as possible to build wealth and hope on the West Bank. A moderate-minded Palestinian who watches Israel expand its settlements on lands that most of the world believes should fall within the borders of a future Palestinian state might legitimately come to doubt Israel’s intentions. Reversing the settlement project, and moving the West Bank toward eventual independence, would not only give Palestinians hope, but it would convince Israel’s sometimes-ambivalent friends that it truly seeks peace, and that it treats extremists differently than it treats moderates. And yes, I know that in the chaos of the Middle East, which is currently a vast swamp of extremism, the thought of a West Bank susceptible to the predations of Islamist extremists is a frightening one. But independence—in particular security independence—can be negotiated in stages. The Palestinians must go free, because there is no other way. A few months ago, President Obama told me how he views Israel’s future absent some sort of arrangement with moderate Palestinians:

[M]y assessment, which is shared by a number of Israeli observers … is there comes a point where you can’t manage this anymore, and then you start having to make very difficult choices. Do you resign yourself to what amounts to a permanent occupation of the West Bank? Is that the character of Israel as a state for a long period of time? Do you perpetuate, over the course of a decade or two decades, more and more restrictive policies in terms of Palestinian movement? Do you place restrictions on Arab-Israelis in ways that run counter to Israel’s traditions?

Obama raised a series of prescient questions. Of course, the Israeli government’s primary job at the moment is to keep its citizens from being killed or kidnapped by Hamas. But it should work to find an enduring solution to the problem posed by Muslim extremism. Part of that fix is military, but another part isn’t.

5. Speaking of the Obama administration, the cause of a two-state solution would be helped, and Israel’s standing would be raised, if the secretary of state, John Kerry, realized that such a solution will be impossible to achieve so long as an aggressive and armed Hamas remains in place in Gaza. Kerry’s recent efforts to negotiate a ceasefire have come to nothing in part because his proposals treat Hamas as a legitimate organization with legitimate security needs, as opposed to a group listed by Kerry’s State Department as a terror organization devoted to the physical elimination of one of America’s closest allies. Here is David Horovitz’s understanding of Kerry’s proposals:

It seemed inconceivable that the secretary’s initiative would specify the need to address Hamas’s demands for a lifting of the siege of Gaza, as though Hamas were a legitimate injured party acting in the interests of the people of Gaza — rather than the terror group that violently seized control of the Strip in 2007, diverted Gaza’s resources to its war effort against Israel, and could be relied upon to exploit any lifting of the “siege” in order to import yet more devastating weaponry with which to kill Israelis.

I’m not sure why Kerry’s proposals for a ceasefire seem to indulge the organization that initiated this current war. Perhaps because Kerry may be listening more to Qatar, which is Hamas’s primary funder, than he is listening to the Jordanians, Emiratis, Saudis, and Egyptians, all of whom oppose Hamas to an equivalent or greater degree than does their ostensible Israeli adversary. In any case, more on this later, as more details emerge about Kerry’s efforts. For purposes of this discussion, I’ll just say that Israel won’t have a chance of winning the current struggle against Hamas’s tunnel-diggers and rocket squads if its principal ally doesn’t appear to fully and publicly understand Hamas’s nihilistic war aims, even as it works to shape more constructive Israeli policies in other, related areas.