Editor’s Note: The Western media and their Secular Sectarian sycophants deliberately obfuscated the rise of ISIS as a “Shia-Sunni” proxy war. No mention of Saudi Arabia, US and France who facilitated ISIS in Syria to overthrow the Assad Government in Syria. Instead all the blame was dishonestly heaped on the “Shia Sectarian” governments of Bashar UK Assad and Nouri Al Maliki. clearly this dishonest narrative lies in tatters just as the tragic destruction of Prophet Jonah’s shrine.As per the warped logic of CNN and BBC propagandists, Jonah too must have been a Shia!Today, the only hope for Iraq’s Sunnis is under a government where the Shias are no longer expected to give up their fundamental right to representational government.

After the “Islamic State” (IS) issued a threat that all Christians in Mosul must convert, die, or flee, most chose the final option and escaped IS held territory. Heading towards the southern region of Iraq, which is believed to be relatively safe, the Christian community was met with offers of safe haven in the cities of Najaf and Karbala, which house some of the holiest shrines of Shia Islam.

In a statement earlier this week, the shrine of Imam Ali announced that “it is ready to host the Christian families who departed their houses in fear of being killed by what is so called the Islamic State of Iraq and Levant.” The deputy secretary-general of the Holy Shrine, Zuhair Shurba, told IraqiNews.com “The Holy Shrine can host many Christian families and provide them all their basic needs.”

Reportedly, the offer is also available to Sunnis, Kurds and all other Iraqis fleeing violence at the hands of ISIS. Following the announcements, the Iraqi city of Basra also opened its facilities to displaced Christians, and is reportedly hosting approximately 100 families from surrounding regions.

The shrine is the site of the final resting place of Imam Ali ibn Abu Talib, son-in-law of Islam’s Prophet Muhammad. According to Sunni belief, Imam Ali served as the fourth and final “righteously guided” Caliph; Shias hold him to be the true successor to the Prophet.

Also inviting refugees is the nearby city of Karbala, home to the shrines of Imam Husain and Abul Fadhl Abbas, two sons of Imam Ali who served as important historical leaders.

Many took to social media to discuss the situation:

Twitter user ‏@Yusr_ wrote “Friends in Karbala say they are staying with relatives and have given up their own homes for Mosul families.

A woman identifying herself as “Mrs Jawad” with the Twitter handle @iraqi_mind, echoed the sentiment, writing “The Road from #najaf to Karbala is flooding with displaced refugees now using shelter that was built for the visitors of #Arbaeen and #NO2ISIS.

Many of the Muslim families who are hosting displaced Christians speak happily of the experience, recounting the historical story of a band of Muslims, led by the brother of Imam Ali, Jaffar ibn Abu Talib, finding safe haven in Christian controlled Abyssinia.Christianity is mentioned several times in the Quran, often times in praiseworthy circumstances, explaining some of the positive sentiment in this circumstance.

“Surely those who believe, and those who are Jews, and the Christians, and the Sabians — whoever believes in God and the Last Day and does good, they shall have their reward from their Lord. And there will be no fear for them, nor shall they grieve,” Chapter 2, Verse 62 of the Quran says.

“and nearest among them in love to the believers will you find those who say, Another citation in Chapter 5, Verse 82 says, “ ‘We are Christians,’ because amongst these are men devoted to learning and men who have renounced the world, and they are not arrogant.” 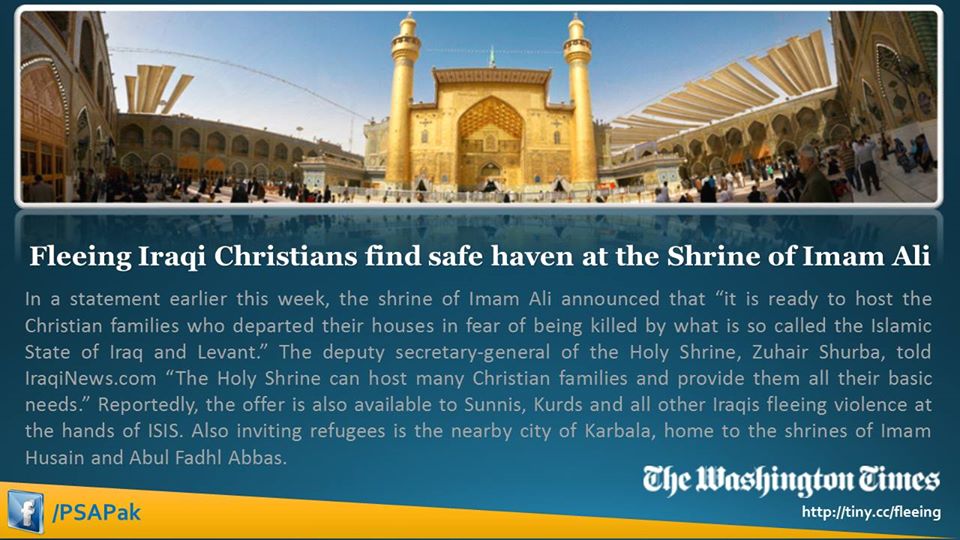