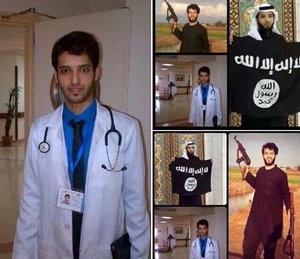 A Saudi Salafi doctor joined ISIS as a suicide bomber and killed 30 people in an attack on a checkpoint south of Kirkuk. It is not clear how Faisal bin Shaman al-Aanzi died or was killed.

According to one Twitter account, he was blown up in a car, while another account said he was killed while attending to the injured militants in an ISIS base which was shelled.

This is not the first time that Salafi Wahhabi and Deobandi have transformed into suicide bombers. The Saudi-funded Salafi and Deobandi mosques and hate preachers are slowly converting many peaceful Sunni Muslims into radical Salafi killing machines.

There are also reports that say Shaman al-Aanzi may have responded to the call issued by the ISIS leader Abu Bakr al-Baghdadi. It might be recalled that Baghdadi said, “Those who can immigrate to the Islamic State should immigrate, as immigration to the house of Islam is a duty.”