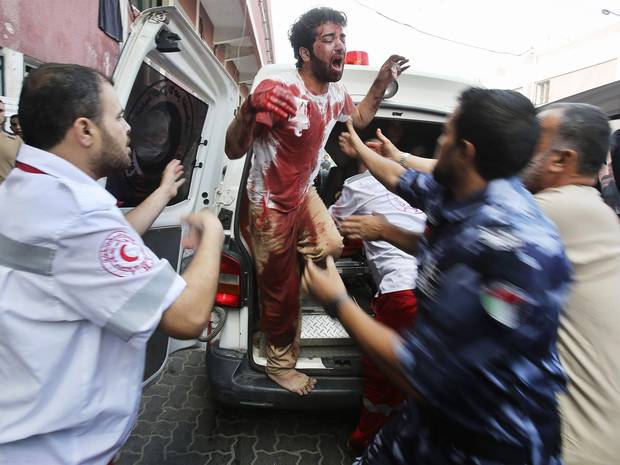 The two week offensive in Gaza, which has led to the deaths of hundreds of Palestinian men, women and children in the crowded coastal enclave, could have seen war crimes committed by Israel, the UN’s top human rights official has warned.

The remarks from UN High Commissioner for Human Rights Navi Pillay in Geneva came a week after Israel escalated its Operation Protective Edge – launched with the stated purpose of halting Hamas rocket fire – from aerial bombardments into a ground campaign that has resulted in a sharp increase in Palestinian casualties.

They raised the possibility that the military campaign, if it continues much longer or is escalated further, could turn into a public relations and diplomatic debacle for Israel as happened with its Operation Cast Lead campaign launched in Gaza in 2008 and 2009.

Citing cases of Israeli air strikes and shelling of houses and hospitals, Ms Pillay told a UN session considering a resolution to set up an international inquiry into Israeli actions that “there seems to be a strong possibility international humanitarian law has been violated in a manner that could amount to war crimes”.

Referring to Israeli naval shelling that killed four Palestinian boys on the Gaza beach on 16 July, Mr Pillay added: “The disregard for international humanitarian law and for the right to life was sharply evident. Every one of these incidents must be properly and independently investigated.” Tonight, the UN council agreed to launch the inquiry.

According to Reuters, Ms Pillay was also critical of militant groups’ indiscriminate firing of rockets and mortars, which has killed three people in Israel and forced much of the country to seek protection in shelters and safety rooms. She said it was failing to distinguish between civilian and military targets. Israeli leaders dismissed Ms Pillay’s criticisms as reflecting an anti-Israel animus on the part of the council. “These are intolerably biased statements based on newspaper clippings, without a discernment of the facts,’’ said the Israeli foreign ministry spokesman Paul Hirschson. “They may pander to the more obscurantist members of the human rights council but they do a huge disservice to human rights.’’

For the Israeli government  the criticisms had echoes of the 2009 Goldstone report on Israel-Hamas hostilities that year. It flayed Israel’s conduct of the warfare and concluded that both Israel and Hamas had committed potential war crimes. Israel rejected that inquiry and report as biased, but it had the result of encouraging the boycotting and delegitimisation of the Jewish state. The Goldstone inquiry was set up by vote by the UN human rights council.

Mr Hirschson took pains to stress his view that during the Gaza campaign, the Israeli military had “taken steps to safeguard civilians not taken by any military in modern history”.

These steps, he said, included warnings of impending strikes by leafleting, telephone calls and text messages “and sometimes suggesting where to move to a safe zone”. He said warnings to evacuate are amplified by firing non-explosive missiles on the roofs of homes that are being targeted.  Israel’s Justice Minister, Tzipi Livni, said her country was acting according to international law. “It is regrettable civilians are killed, but when we call on them to vacate and Hamas calls on them to stay, then that is what happens,” she reportedly told Israel radio.

Palestinians say that warnings are not issued in some cases and in others there is insufficient time to leave. Mr Hirschson accused Hamas of “engaging in criminal behaviour by using their population as human shields and telling the population not to pay attention to Israeli warnings. It’s almost as if they want to generate civilian casualties to wage public relations war against Israel”.

However, all leading Israeli human rights groups are not convinced by these government explanations and their assessment of the situation is not far removed from that of Ms Pillay. Referring to reports of strikes against civilian targets, 10 Israeli human rights groups wrote to the Attorney-General Yehuda Weinstein on Monday that the “reports and data which have accumulated thus far regarding the nature of the strikes and level of injury to non-combatant civilians as a result of these strikes raise serious concern of severe violations of international humanitarian law and specifically the laws of war”. The groups said they were especially concerned about possible violations in Sunday’s fighting in the Shajaiya neighbourhood of Gaza City, during which more than 60 Palestinians and 13 soldiers were killed.

An Israeli 155mm self-propelled howitzer fires from southern Israeli into the Gaza Strip (EPA)
The army, for its part, issued a statement saying that Hamas had used a hospital, al-Wafa, to launch rockets against Israel, as a command and control centre and to keep weapons. “It is a modus operandi of Hamas to use institutions meant to be neutral in order to terrorise Israel and the Israeli forces sent to Gaza,” said Major Arye Shalicar of the army spokesman unit. Major Shalicar said that Israeli troops had killed all the gunmen that had fired on troops from the hospital after its staff heeded calls to vacate.

In other developments, a Thai agricultural worker on an Israeli farm was killed when a rocket from Gaza struck near the southern city of Ashkelon as Hamas and its allies kept up their bombardments. The army announced that two more soldiers had died in Gaza fighting on Tuesday, bringing the number of Israeli military men to die in the war to 29. At least 649 Palestinians and 31 Israelis have been killed in the past 15 days of fighting, officials say. The UN estimates that about 74 per cent of those killed in Gaza were civilians.