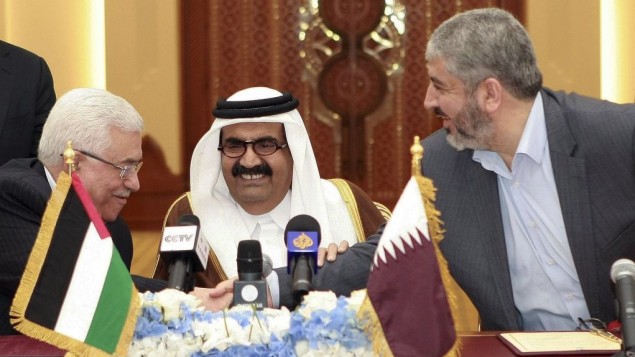 President Shimon Peres accused Qatar on Wednesday of becoming “the world’s largest funder of terror” due to its financial support for Hamas in Gaza.

“Qatar does not have the right to send money for rockets and tunnels which are fired at innocent civilians,” the outgoing statesman told UN Secretary General Ban Ki-moon in Jerusalem. “Their funding of terror must stop. If they want to build then they should, but they must not be allowed to destroy.”

A spokesman for Peres would not comment on the information on which the president was basing his accusation, but Prime Minister Benjamin Netanyahu’s former security adviser said Qatar was relentlessly financing Hamas terror.

Qatar’s recently attempted to transfer funds for the salaries of Hamas civil servants in Gaza, following the formation of a Palestinian unity government, but was blocked by the United States, which pressured the Arab Bank not to process them. But former national security adviser Maj. Gen. (res) Yaakov Amidror told The Times of Israel that the emirate’s funding for the organization’s terror apparatus, including tunnel diggers and rocket launchers, has continued unabated.

“Hamas currently has two ‘true friends’ in the world: Qatar and Turkey,” Amidror said. The small Gulf state is currently Hamas’s closest ally in the Arab world, after the movement’s relations with Egypt soured following the ouster of Muslim Brotherhood president Mohammed Morsi in June 2013. Qatar, which has invested hundreds of millions of dollars in reconstruction and infrastructure projects in Gaza, is also home to the movement’s political leader Khaled Mashaal in Doha.

“The one supporting this organization financially, almost alone, is Qatar,” Amidror said.

Qatar isn’t only being accused of funneling funds to Hamas. Israel and Egypt are also blaming it for blocking Egypt’s efforts to broker a ceasefire in Gaza. On July 17, Egyptian Foreign Minister Sameh Shukri said that Qatar and Turkey were undermining Egypt’s quiet-for-quiet ceasefire initiative, a position echoed by Foreign Minister Avigdor Liberman.

As reported in these pages, Qatar drafted its own ceasefire plan last week, adopting most of Hamas’s demands. The plan — penned before the start of Israel’s ground offensive – was reportedly presented to Western officials and to Palestinian Authority President Mahmoud Abbas. Hamas has denied the existence of any ceasefire plan besides that put forth by Egypt.

A Western source close to the Qatari regime, speaking to The Times of Israel on condition of anonymity, denied that Qatar was blocking the Egyptian initiative.

“Qatar is not blocking anything, it simply realizes that a ceasefire needs to take Hamas into account,” the source said. “You can’t have a ceasefire agreed upon between Israel, Egypt and Fatah while the actual authority on the ground doesn’t have a say. The only solution is to use Qatar’s leverage over Hamas to come up with an initiative that all sides can agree on.”

However, the ceasefire draft presented to Abbas in Qatar over the weekend “had Hamas’s handwriting all over it,” the source acknowledged, even while Qatar claims neutrality as a mediator. “Qatar is clearly biased toward Hamas over Fatah.”

“The international and Arab communities want a solution between the PLO and Israel, but Qatar wants to see a ceasefire agreed between Hamas and Israel, without PLO involvement,” he said. Qatar doesn’t necessarily see the solution in Gaza in the context of a comprehensive solution to the Palestinian-Israeli conflict, “but within the immediate context of the Gaza war.”

Another aspect of Qatar’s destructive influence, Israel believes, is state-backed news channel Al-Jazeera. Communications Minister Gilad Erdan requested of the Cable and Satellite Broadcasting Council this week that it stop broadcasting Al-Jazeera due to its “extremely severe incitement against the State of Israel as well as enthusiastic support for Hamas and its terrorist actions.” Liberman said his ministry was examining the possibility of shutting Al-Jazeera’s offices in Israel, Israeli news site Walla reported.

On Tuesday, the channel evacuated staff from its Gaza bureau after coming under fire, allegedly from Israel. Speaking to Israel’s Army Radio, the channel’s Jerusalem bureau chief, Walid Al-Omari, accused the Israeli ministers of inciting against his channel and placing TV crews at physical risk.

Meanwhile, a diplomatic tug of war has been underway in the Arab Gulf between Saudi Arabia and the United Arab Emirates — both staunch supporters of the new Egyptian regime —  on the one side and Qatar on the other. On Tuesday, Qatari emir Tamim bin Hamad arrived in Jedda, Saudi Arabia, to discuss the Palestinian situation with Saudi King Abdullah. No details of the meeting were immediately available.