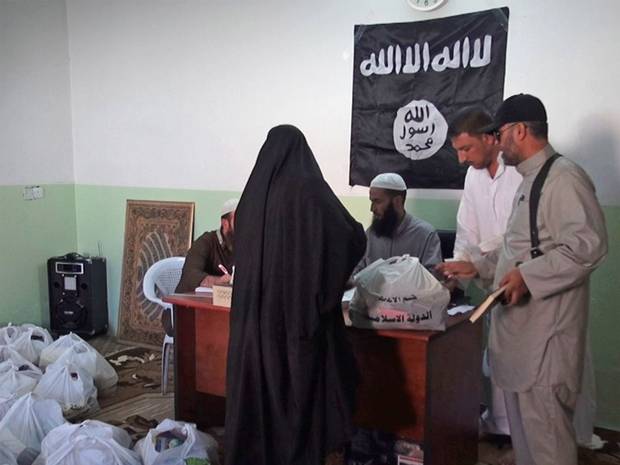 Western governments are sending millions of pounds of aid to areas held by the radical Islamic group Isis in northern Syria, The Independent can reveal.

The aid, which is paid for by the UK, European and US governments, consists of food, medicine and hygiene kits. It is brought into the country through the war-torn north from the two last remaining border posts open with Turkey in Reyhanli and Kilis.

Western groups such as Mercy Corps International, the Norwegian Refugee Council, World Vision, the International Rescue Committee and the United Nations World Food Programme provide supplies to hundreds of thousands of people every month across the self-proclaimed Islamic State.

This includes towns such as Raqqa, Manbij and Jarablus, which have witnessed beheadings, crucifixions and other draconian interpretations of sharia since Isis took over early this year.

“We have lots of direct shipments into Isis-held areas. Nearly all of our trucks go through the Turkish border post near Kilis. Sometimes they get stuck en route, and we have to wait two or three weeks for them to get there if they get held up by fighting or another opposition group which isn’t happy that we’re sending aid through an Isis checkpoint,” said a Western aid worker. Aid groups say their aim is to help vulnerable people, not to support the rule of Isis. Mercy Corps, which has headquarters in the UK and the US, has received £27.3m from the UK Department for International Development for humanitarian activities in Syria.

A spokeswoman for Mercy Corps said: “We have been delivering essential aid to hundreds of thousands of civilians in need on all sides of the conflict, irrespective of race, ethnicity, religion or political affiliation – as an independent, impartial humanitarian organisation, that is our mandate.”

Isis uses social media to demonstrate the brutality with which it treats its enemies and those who break its laws. But it uses the same media to show it distributing aid and administering healthcare to people under its rule.

Its ability to deliver free aid and free fuel has been a major factor in persuading residents of recently conquered towns such as Mosul to accept its rule.

A spokesman for Dfid said it did not supply aid to Isis directly: “We supply life-saving aid to people who need it, in line with international humanitarian principles including impartiality.”

Bashar al-Assad, who was sworn in for a third term today, said states that have supported terrorism will pay the price and that he would fight insurgents until security was restored to the country.

“Soon we will see that the Arab, regional and Western states that supported terrorism will pay a high price,” he told his supporters at the presidential palace.

Local civilians queue for aid administered by Isis. Since it declared a caliphate the group has increasingly been delivering services such as healthcare, and distributing aid and free fuel
Meanwhile in warehouses and industrial parks along Turkey’s southern border, there are shipping containers waiting to be unloaded. Workers unload unmarked boxes which are then loaded on to commercial trucks. The food includes wheat, rice, tinned tomatoes, sugar and oil. The medical supplies are basic items that do not require cold storage such as bandages and basic drugs.

The trucks are then driven across the border to areas precariously held by Syrian opposition forces and Islamist groups including Jabhat al-Nusra, al-Qa’ida’s official branch in Syria, which is also fighting against Isis.

Isis, reinforced by US military supplies taken from defeated Iraqi forces, has renewed its assaults against Syrian non-government forces including Kurds and Western-backed groups such as the Free Syrian Army.

Although Isis is officially fighting Jabhat al-Nusra, the Islamic Front and the Free Syrian Army, humanitarian aid and commercial goods are more often than not allowed to cross the “border” to Isis areas.

The aid is then distributed and monitored by civilian Syrian relief committees, many of which were in place before Isis took over, according to aid workers who operate out of Turkey’s southern city of Gaziantep.

Aid workers say Isis, which has kidnapped Western journalists and workers in the past, lets them work mostly without interference. “They’re happy to let us work on the large part without preconditions,” said one Western aid worker.

Isis is designated a terrorist group by the United State which also offers a reward of $10m (£5.8m) for information leading to the capture of Abu Bakr al-Baghdadi, who declared himself caliph in imitation of the companions of Mohamed who set up a caliphate in the Middle East and North Africa in the seventh century.

In addition to international aid, Isis-controlled areas of Raqqa and Deir Ezzour are very fertile and produce a vast amount of the region’s wheat. Deir Ezzour also has some of the biggest oilfields in Syria.

Isis is also luring doctors and nurses with large salaries in return for their loyalty, a Syrian doctor working for a Norwegian medical NGO in Raqqa told The Independent.

“At the beginning they would take any aid they didn’t have to pay for, but since they announced the establishment of the caliphate, they are running their own services so that it can become more like a state.”