Home  »  Featured • Original Articles   »   Sunni is not my enemy: A Pakistani Shia’s perspective – by Abdul Nishapuri 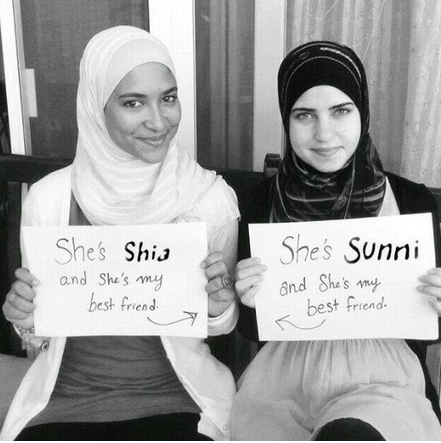 Lately I have noticed a trend in a few Shia activists of Pakistan, Iraq and elsewhere who seem to categorize or perceive all Sunnis as their enemies holding them responsible for Shia genocide and persecution. This trend is worrying and must be clearly highlighted and addressed.

Shias must not fall into the false Shia-Sunni binary trap. This is a trap set by the Salafi Deobandi lobby and the Saudi-influenced CIA and MI6 peddlers of this discourse. The pernicious aim of this lobby is to disguise the violent, puritanical agenda of Salafi-Deobandi extremists as “mainstream Sunnism”. This is an insult to diverse Sunni schools of thought such as Hanafi, Maliki, Shafii and Hanbali which are rooted in Sunni and Sufi cultural paradigms that are tolerant of diversity and pluralism. Shias must not abandon their Sunni brothers and sisters and allow mainstream Sunnis to be hijacked by takfiri Salafists and Deobandis.

The problem with the false Sunni-Shia binary discourse is that it doesn’t have a historical or factual basis. Moreoever, it is both politically and ideologically flawed. Let me explain.

In the early Islamic era, there were two types of Shias (followers), i.e., Shias of Ali (as) and Shias of Usman (ra). In fact while Ali was the leader of the Shias of Ali, the term ‘Shias of Usman’ was coined by Muawiya ibn Abu Sufyan after Usman’s martyrdom who exploited this matter to gain political legitimacy for his rebellion against a legitimate Rashidun Caliph, Ali. While Muawiya and Umayyads at large were able to establish their Kindgom after the martyrdom of Imam Ali, the verdict of history remains against them. Today, not a single Muslim considers Muawiya as a legitimate or Rashidun Caliph, while all Muslims, Sunni and Shia included, treat Ali as a rightful Rashidun Caliph. In other words, practically, almost all Muslims have, at least in this aspect, become Shias of Ali. This important victory of Imam Ali over Muawiya is a firm basis of Sunni Shia unity in the world today and a manifestation of the fact that the differences between the two sects or branches of Islam are neither frozen in time nor unsurpassable.

Today, almost all Sunnis have rejected crimes of Yazid and other Umayyad Caliphs against the family of the Prophet (pbuhp) and the followers (Shias) of Imam Ali (as). All Sunnnis accept Hazrat Ali as a just and legitimate caliph while most consider Muawiya as an usurper and a tyrant king, not a rightful caliph.

Historically, it is a fact that Sunnis and Shias have co-existed, mostly peacefully, in the last 1400 years. They have been performing Hajj and Umrah together and almost all Sunni and Shia srhines and places of worship are open to both sects. There is also a long tradition of inter-sect marriages between Sunnis and Shias which is amply found in Iraq, Syria, Pakistan, Bahrain, Yemen and other countries. Yes, there have been some excesses from extremists – from both sides – but those excesses and crimes cannot and must not be attributed to all Sunnis or all Shias.

The Sunni-Shia binary becomes particularly misleading and counterproductive when some Shias and other analysts fail to take into account important heterogeniety within Sunni Muslims. While a dominant majority of Sunni Msulims loves Ahlul Bayt (as) including Imam Ali and Imam Hussain, there is a tiny minority, represented by certain Takfiris and Khawarij within Salafis and Deobandis, which equates Muawiya with Imam Ali and Yazid with Imam Hussain. In fact, some of these people treat Yazid as a rightful Caliph while rejecting Imam Hussains’ rightful stance against Yazid. Based on this ideological or historical position, this tiny minority harbours genocidal intentions against Shia Muslims and Sunni Muslims, a fact which is amply reflected in massacres of Shias, Sunni Sufis and other moderate Sunnis in Pakistan, Iraq, Syria, Libya, Mali and other countries at the hands of  Salafi, Wahhabi and Deobandi extremists. Therefore, it is historically, factually and ideologically wrong to consider such extremists as representatives of all Sunnis. Such an approach is also counterproductive from a strategic and political perspective because accepting and treating these criminals, terrorists and extremists as representative of all Sunnis gives them legitimacy, pushing them (the perpetrators) and other peaceful Sunnis (the victims) in the smae category thus creating space and opportunity for radicalization of all Sunnis. Clearly, this flawed approach may result in isolationist and genocidal repercussions for Shias and other Muslim and non-Muslim minorities in Sunni-dominated countries, communities and regions.

We cannot and must not ignore the fact that in many incidents of Shia genocide and persecution, ther were always a few honourable Sunnis who nobly defended and tried to save Shias from Salafi and Deobandi terrorists. In recent massacres of Shias in Mosul, Tikrit and other areas of Iraq, there were always some noble Sunnis (including Arab and Kurd Sunnis) who provided refuge to Shia families often themselves paying heavy price to Salafi Wahhabi terrorists of the Islamist State (ISIS). Within Pakistan, there are many incidents reported, one of them in Gilgit Baltistan when at least two Sunni Muslims sacrificied their lives in an attempt to save Shias Muslims from Deobandi terrorists. Currently, Pakistan army, secular in nature but comprising of mostly Sunni Muslims of course, is conducting a military operation against Deobandi and Salafi terrorists holed up in North Waziristan. In Syria, President Bashar al-Assad is supported by Sunnis, Shias and Christians to rid his country of Salafi, Wahhabi and Deobandi Khawarij. In Bahrain, one of the key leaders of the pro-democracy movement is a Sunni Muslim, and in Saudi Arabia, a Sunni Muslim is one of the key voices for the rights of Shia Muslims. In Pakistan, the media, most of the time, tries to keep a balance between Sunnis and Shias by inviting both Sunnis and Shia scholars in its religious or political programmes, despite the fact that Shias represent only 15-25% of the country’s population. In Lebanon, Hezbollah is often criticized by some Shia activists for its reconciliatory and friendly approach to Sunni Muslims.

As Shias of Imam Ali, we should stand for the rights of all oppressed and against all oppressors, notwithstanding faith, sect, ethnicity, nationality etc. If we don’t practice or believe in this principle, we don’t deserve to identify ourselves as Shias of Ali.