Nasser was one of three British Muslims who appeared in a chilling Isis recruitment video two weeks ago urging others to join them in the Jihad.

The others sat alongside him in a field believed to be in Syria was fellow Cardiff youth Reyaad Khan, 20, and Aberdeen-raised Abdul Raqib Amin, 25.

Nasser’s Twitter profile mocked the publicity which followed the release of the Isis video, gave a graphic account of a battle and referred to beheadings. 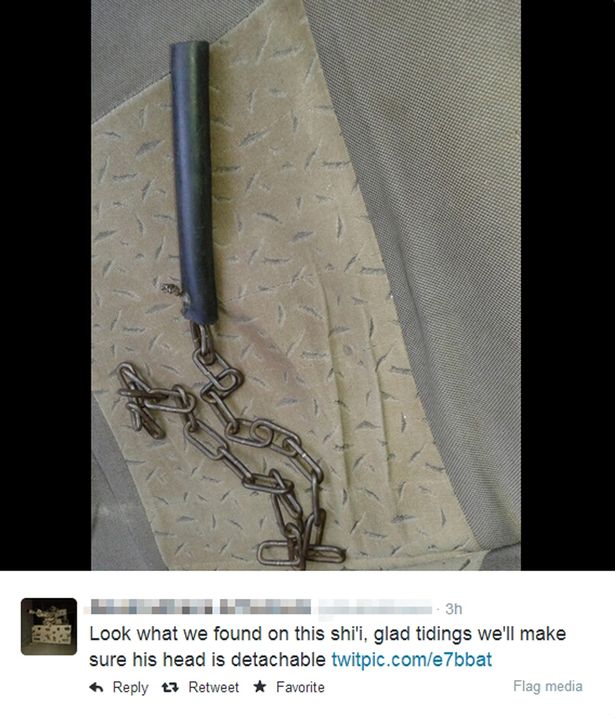 He posted a chilling photograph on Tuesday showing a home-made weapon believed to be taken from an enemy Shia Muslim – and his plan to behead the captive fighter.

The Twitter post said: “Look what we found on this shi’i, glad tidings we’ll make sure his head is detachable.”

Nasser describes himself as a “soldier of the Islamic State of Iraq and Sham” on his Twitter profile.

And his social media profile explains his beliefs as based on “a book that guides and a sword that supports it”.

But his heartbroken father Ahmed Muthana, 57, said he wants his children to come home “safe and well” from Syria – even if they are imprisoned for posting threats about bomb making.

He said: “This is not the son I know. Maybe if they have a heart they will come back.

“What they are doing or posting online, they are being told to by the people with the guns who feed them, look after them and have control over them.

“I think they are trapped in the situation and that makes it hard for them to come back or leave the place.

“I think they are being forced into posting these things because my kids are not like this.

“I haven’t had any contact with either of my sons since they left.

A man believed to be his son Aseel Muthana, 17, who left Britain in February to join his older brother Nasser, said he is willing to die for the cause.

And he declared he has no plans to return to the UK.

In an online conversation with the BBC he said there were “loads” of other men from Britain who have joined Isis.

Asked how he could defend the brutality of Isis killings in Syria, he said he stood by Sharia law and was glad to be out there.

And when asked whether he realised he would be arrested if he returned to the UK, he replied: “Yes, most probably.” 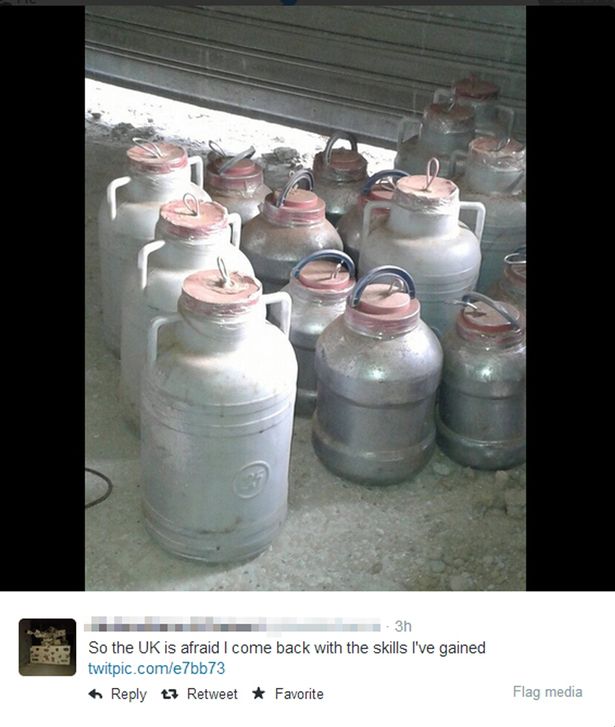 Comments on a social media account, believed to be that of Reyaad Khan, include graphic references to the killing of a number of people.

A photograph of the killings, understood to have been carried out by Isis, was posted on the same account.

Another post describes how a spy was caught trying to plant a microchip in a house, adding “…we sent him to his Lord”.

The comments made online by the three men also appear to be celebrating the caliphate announced by Isis on Sunday.

It was also revealed today a teenager from Cardiff has been arrested on suspicion of terrorism offences.

The 18-year-old man is from the Grangetown area – close to inner city areas of the Welsh capital where a trio of young Jihadists lived.

He was seized under the Section 5 of the Terrorism Act 2006 for assisting in the preparation of an act of terrorism.

Police sources say the arrest is not directly connected to the three Cardiff men currently in Syria.

Comment by Ale Natiq ( a UK citizen ) : “Promising students”, privileged educated urban youth from UK making bombs, vow to behead Shias and call upon other Muslims to join the terrorism ISIS in Syria and Iraq. Whatever happened to your uneducated/uncultured/villager terrorist theory – here’s another case proving terrorism is a modern day urban phenomena as the Salafi Wahabi ideology which is starting point for terrorism is most appealing to urban educated youngsters with an identity crisis. Villager/rural uneducated peeps are okay with the shrines and mela.