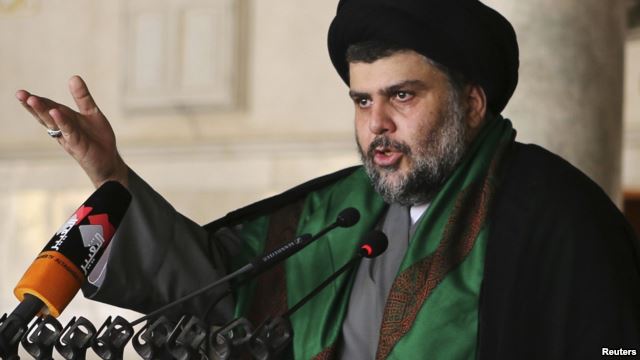 Muqtada al-Sadr, a powerful Iraqi Shia religious leader, has called for a national emergency government, a day after Nouri al-Maliki, the prime minister, rejected any attempts to challenge his rule.

Sadr, whose Mahdi army has pledged to battle the Islamic State of Iraq and the Levant, on Wednesday said the Iraqi government “must fulfil the legitimate demands of the moderate Sunnis and stop excluding them because they have been marginalised”.

He demanded “new faces” in a national unity government following April 30 elections that saw Maliki emerge with by far the most seats, albeit short of a majority.

“We also need to rush the formation of a national government with new names and from all backgrounds and not to be based on the usual sectarian quotas,” Sadr said in a televised address.

“I call upon all Iraqis to stop fighting and terrorising the civilians, the Iraqi government must fulfil the legitimate demands of the moderate Sunnis and stop excluding them because they have been marginalised.”

Al Jazeera’s Imran Khan, reporting from Baghdad, said the comments effectively meant that Sadr wants to get rid of Maliki and choose a new government.

“These comments are strong and will be noticed,” he said, adding they showed a “huge rift” between what Maliki wants and what others believe.

“But Maliki ‎insists that he is the only one that can lead Iraq out of this crisis. July 1st will be a big test for him politically. That’s when parliament are due to meet, and they’ll discuss the formation of the new government”.

Sadr promised his fighters would “shake the ground under the feet of ignorance and extremism”.

His remarks came days after fighters loyal to him paraded with weapons in the Sadr City area of north Baghdad, promising to fight the offensive by the ISIL fighters.

Barack Obama, the US president, has so far refrained from carrying out air strikes on the rebels, as urged by Maliki.

However, US military advisers began meeting Iraqi commanders on Wednesday, with the US having offered up to 300.

The US has pressed for Iraq’s fractious political leaders to unite in a national emergency government, and on Wednesday brushed off Maliki’s insistence that such a move would be a “coup against the constitution and the political process”.

The US has stopped short of calling for Maliki to go, but has left little doubt it feels he has squandered the opportunity to rebuild Iraq since American troops withdrew in 2011.