Home  »  Newspaper Articles   »   In wake of the airport attack: Are we targeting the right enemy? – by Fahim Zaman 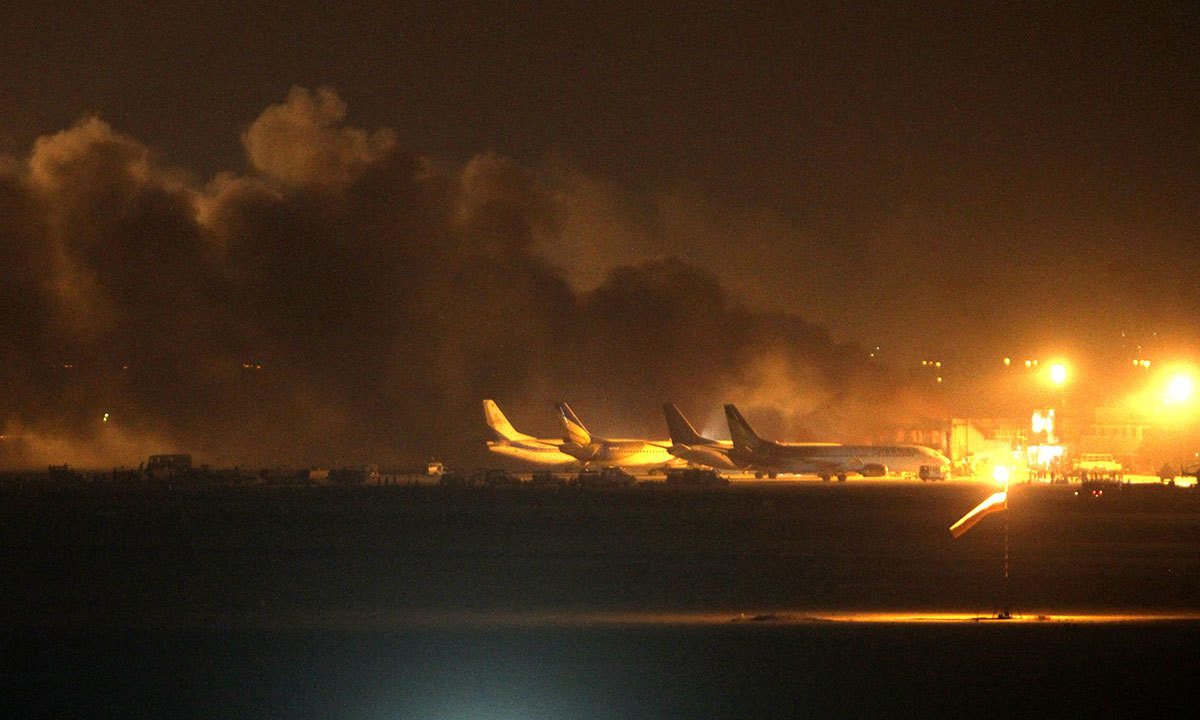 Security, we are told, has been beefed up and authorities plan to ‘construct a wall’ between the perimeter fence north of the airport and Bhitaiabad, closing down the road connecting Shar-e-Faisal with Pehlwan Goth. More than 100 CCTV cameras will be installed around Jinnah Terminal along with many other benign measures. Police have also detained 20 suspected Afghan nationals near Sohrab Goth for questioning.

The attacks may have triggered the long-awaited military operation in North Waziristan. The ISPR now claims that airstrikes have killed many foreign militants including Abu Abdul Rehan Al Maani — Commander of Islamic Movement of Uzbekistan and the alleged mastermind of Karachi attack.

Let’s take some time out to examine the attack and see if ISPR’s claim is satisfying enough to assure the June 8 attacks won’t be happening again.

The most sensitive area of any airport is considered to be its restricted ‘Airside’. The perpetrators of June 8 attacks were obviously aware that the essential aviation services at the airport were at least a kilometre inside the fences of the well-lit and heavily fortified ‘Karachi Airport Airside’ with flat earth in between. It is also protected by a large and well-trained airport security force. Any attempt to enter through these fences was sure to encounter massive and lethal resistance.

Terrorists attempting to enter through the ‘Fokker Gate’ at PIA Engineering & nearby customs ‘air freight unit’ (ICG gate) indicates that the perpetrators were aware of the fact that both facilities were manned by lightly-armed ASF guards with no picket or barricades on the apron side (the area where aircraft are parked, unloaded or refueled).

According to eyewitnesses, as the graveyard shift started, there was a single ASF guard at the Fokker Gate and two working ASF guards at the scanner just inside. Terrorists dressed in ASF uniforms coming from the Pehlwan Goth side easily killed the guard outside and the two ASF men at the scanner. But the fourth guard behind the open grill returned fire and held his ground against the heavily armed militants until he finally lost his life.

Pandemonium, however, alerted the ASF men on the apron. Attackers appeared oblivious of the fact that just outside, PIA wide-body ‘Ispahani Hangar’ was merely 300 meters on the left and the crucial ‘Air Traffic Control Tower’ 200 meters on the right. Militants continued their killing rampage until they were finally killed by the security forces before they came out of PIA Engineering.

Meanwhile the second lot of the terrorists struck the ICG gate. The lone, unarmed customs guard ran to save his life along with horrified importers. The two unsuspecting ASF guards at the apron were quickly mowed down but the third guard positioned behind the wooden post fought back.

According to eyewitnesses, he too, died fighting till the last moment.

That allowed the terrorists to move across into the apron near the aircraft night parking area. As the militants came out, they were forced to retreat back inside the private cargo sheds on the eastern side of the ICG due to overwhelming ASF fire.

The indiscriminate firing by the terrorists damaged a Boeing-747, Airbus-310 grounded for maintenance and at least a cargo plane sitting duck at ‘night parking area’. Over two dozen lives were lost, part of a cargo terminal burnt and international confidence lost in the nation’s financial hub being a safe place to travel.

If the terrorists had come out and turned right, barely 150 meters away they would have found the ‘Jet fuel’ storage facility. A single hit over those gigantic fuel tanks could have resulted in a cataclysm at the airport.

As demonstrated by their poor execution, it was obvious these racing-to-die ‘Uzbek’ attackers were not the ones who planned the attack. All attackers were killed that night, leaving us with the question, ‘who were the planners and where did they go?’

The security system at the airport has a number of shortcomings that may have facilitated the attack. Entry to the airside is allowed only through ‘airport entry pass’, which is issued only by ASF after police clearance. But unfortunately, not every functionary lives in this city and policemen in faraway districts would perhaps be more sympathetic towards blood and kin than to the cause of protecting a place hundreds of miles away.

Moreover, when airport functionaries lose their job, they do not always surrender their ‘entry cards’ immediately.

And while ASF is responsible for defending the airside, the airport itself remains the responsibility of the ‘Airport Police Station’ – a lucrative posting in Karachi.

There are a number of other possible factors like the above ones, which may have played a role.

But the question worth asking here is, are we targeting the right enemy in the ongoing operation? The planners could well be working inside the Karachi airport, with possible links extending to North Waziristan.

Rangers raided Ashraf ul Madaris, less then a kilometer from ASF camp and Runway 07L. According to the rumour mills, Rangers came looking for a ‘high profile militant’ from TTP Swat visiting Maulana Hakim Akhtar. However, during the ensuing exchange of fire, panic and commotion, the militant slipped away.

Next day, a powerful bomb ripped through the Rangers compound in North Nazimabad. Naeem Bokhari of Lashkar-e-Jhangvi swiftly claimed responsibility for that attack. LeJ, mind you, is an offshoot of sectarian Sipah-e-Sahabah known for its close links with Islamic Movement of Uzbekistan, TTP and Al Qaeda.

The point I’m trying to make is that there’s a need to appreciate that a very powerful nexus exists between militants, certain religious parties (Jamat e Islami Jameet Ulma e Islam Deobandi) and groups (LEJ ASWJ Sipah Sahaba TTP Deobandi) in the country, which is probably more lethal than any bunch of ragtag militants in some faraway mountain ranges.

While the beefed up security and other measures announced by the authorities could protect Karachi Airport from future attacks by militants, hoping that such actions could dissuade motivated militants who may still be working inside the airport is flawed thinking.