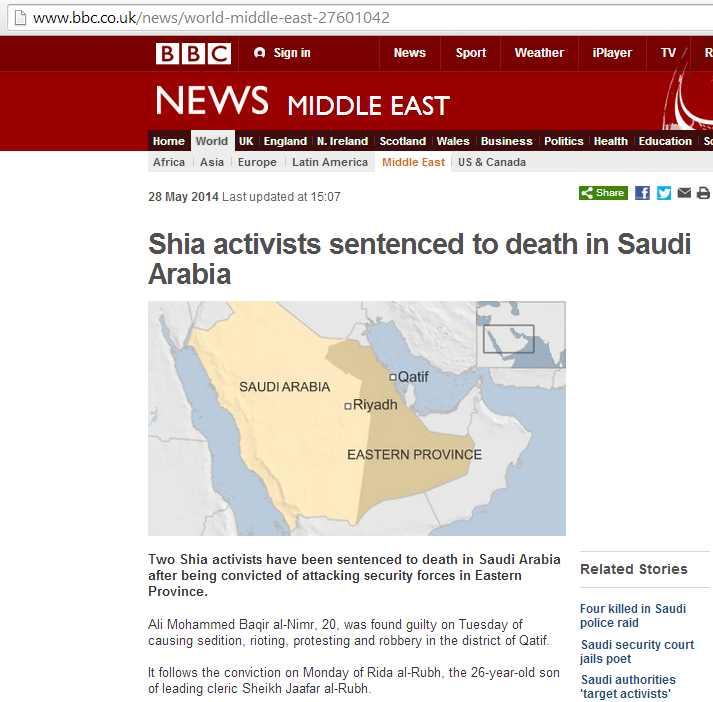 On behalf of Sunni and Shia Muslims of Pakistan, India, Afghanistan, Saudi Arabia, Bahrain, Kuwait, UK, USA and other countries, we appeal to Saudi King Abdullah to spare life of top Shia cleric and human rights activist Ayatullah Sheikh Nimr Baqir al-Nimr. This appeal is also supported by our brothers and sisters other faiths including Christians, Hindus, Sikhs, Jews and other communities.

According to various media reports, Saudi government has decieded to execute Ayatollah Nimr, apparently his only crime is calls for equal human rights for Shia and Sunni Sufi Muslims in Saudi Arabia, equal to dominant Salafi Wahhabi Muslims. Saudi Arabia has reportedly sentenced 26 people to death on such charges as giving speeches critical of the Al Saud and participating in protests against the ruling family. Among those sentenced to death is Sheikh Nimr, who was attacked, injured and arrested by security forces en route to his house in the Qatif region of Eastern Province on July 8, 2012. He has been charged with disturbing the country’s security, giving anti-regime speeches, insulting King Abdullah in Friday Prayers sermons, and defending the political prisoners.

Shia activist Kamel Abbas al-Ahmed, who has been in detention after criticizing the regime and fighting for religious freedom and against religious discrimination, is another person convicted by a Saudi court. In 2009, Ahmed rejected the remarks of Adel al-Kelbani, the Imam of Grand Mosque of Mecca, who had alleged that Shia Muslims are ‘unbelievers.’ Following Kelbani’s comments, Ahmed joined a group of political activists comprising writers and intellectuals who issued a statement saying the Saudi authorities are responsible for sectarian discrimination against Shia Muslims in the country.

We note that Shia Muslims of Saudi Arbaia in general and particulary from Eastern Region including Qatif are barred from their inalienable right to religious and political dissent. There are thousands of political prisoners in the Saudi dungeons who expect rights activits and groups to stand up for the one thing which all of us share, the unbreakable bond of humanity.

To this religious and political discrimination came a man who wanted to help, represent and give a voice to his people. In July 2012, Ayatollah Nimr Al-Nimr was shot by Saudi police and arrested and is currently in prison and being denied medical care since his arrest. Prosecutors are now pushing for the execution of this man on these political and religious grounds. Apparently, the court has already sentenced him to death and he can be executed any time soon.

This post is an URGENT request to all concerned human rights, social justice and pro-democracy activists in Pakistan, Saudi Arabia, UK, USA and all over the world to unite to save the life of a progressive community leader Sheikh Nemr Al-Nemr who has been in Saudi prisons since 8 July 2012. During the court hearings, the Saudi government’s prosecutor demanded that Al-Nemr must face death penalty – in the form of crucifixion – for the following charges:

1. Instigating sectarianism
2. Breaching national unity
3. Betraying the country
4. Defaming the rulers and religious clerics in the Gulf States
5. Encouraging his supporters to break the law

All of the above charges are nothing more than false accusations used to attack Al-Nemr and silence all similar voices for equality of Sunni and Shia Muslims and human rights in Saudi Arabia.

Here’s an anlaysis of the official charges against al-Nimr:

1. “Instigating sectarianism,” means demanding equality of Sunni and Shia, Musilm and non-Muslim, Arab and non-Arab, and being against the state’s discrimination exercised on religious minorities in Saudi Arabia.

3. “Betraying the country,” means defending all political detainees and prisoners of conscience.

4. “Defaming the rulers and religious clerics in the Gulf States,” means demanding an end to the ongoing systematic oppression. It also means being a progressive faith leader.

5. “Encouraging his supporters to break the law,” means encouraging men and women to participate in peaceful protests.

The above are not mere speculations, but they are based on what Al-Nemr taught, spoke and preached at all times. Nimr’s speechs, some of them also translated in English, are widely available on Youtube.

Despite the Saudi regime’s systematic oppression, Al-Nemr continuously insisted that all protests and resistance must be peaceful. He preached that the “roar of word” is stronger than the state’s bullets.

In terms of his ideology in support of equaliyt and human rights, Al-Nimr supports indigenous autonomy including Kurdish majoriy control of Iraqi Kurdistan. Al-Nimr supports “the idea of elections” and democracy.

In August 2008, he said that he sees US citizens as a natural ally of Shia as the thinking of both US citizens and Shia is “based on justice and liberty”.

In August 2008, he stated that he believes that Iran and other states outside of Saudi Arabia act mainly out of self-interest, not out of religious solidarity.

Al-Nimr stated that in the case of internal conflict in Saudi Arabia, the Saudi Shia would have the right to ask for international intervention in analogy to requests for foreign military intervention by Kuwaitis and Saudis to the US in the 1990–91 Gulf War and people from Darfur during the War in Darfur.

“We are determined to demand our legitimate rights by peaceful means.” – Ayatollah Nimr Al Nimr.

What can we do to help Al-Nemr?

– Spread awareness in all communities irrespective of sect, faith and creed.

– Be in touch with human rights organizations, educating them about the current situation

– Urge the Saudi government, by contacting Saudi embassies and consulates, to release Al-Nemr and other prisoners of conscience. This includes letter writing and organizing protests or rallies

For reference, please listen carefully to Al-Nemr’s words (there are English subtitles) on non-violent resistance and the culture of peace:

Also have a look at Amnesty International’s statement at the time of the arbitrary arrest of Al-Nemr last year:

For more current information on Al-Nemr, and the pro-democracy protests, check out this article on the Socialist Worker (Canada):

The right to live is a human right. 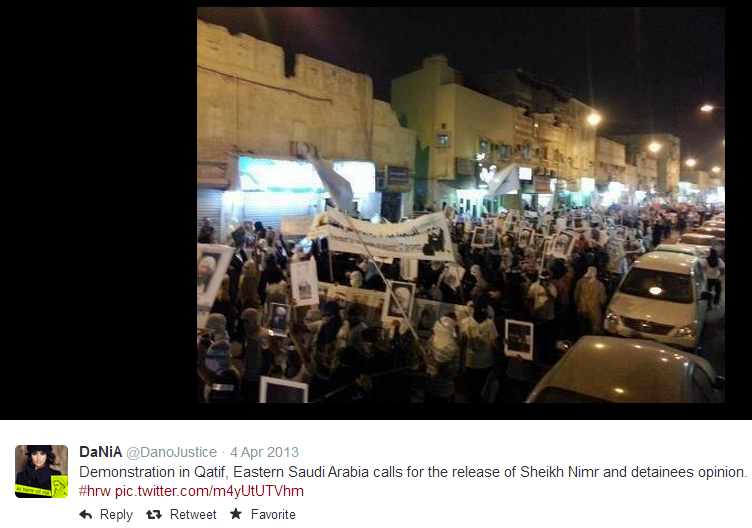 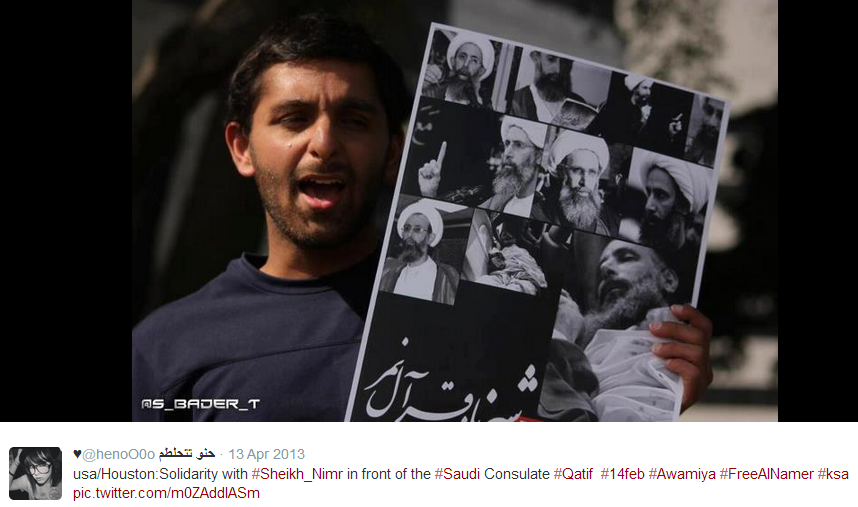 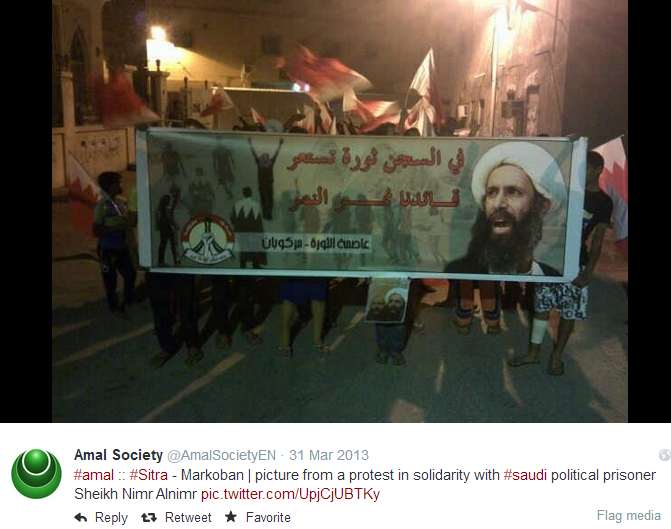 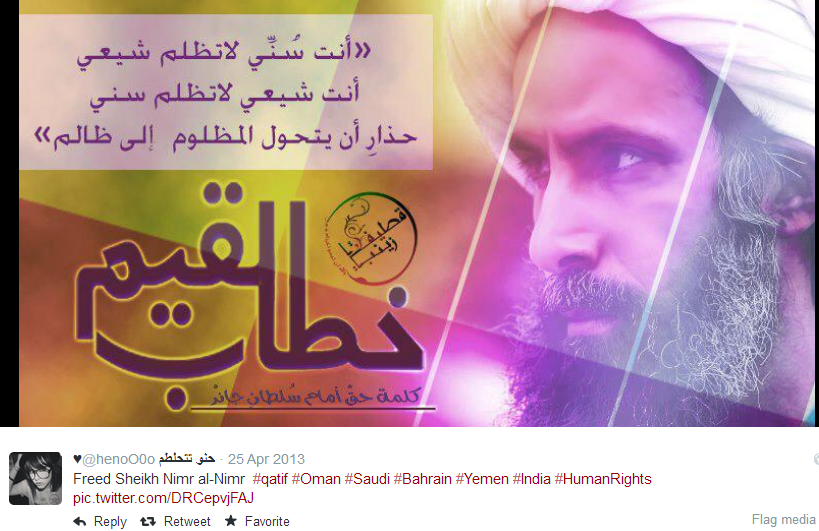 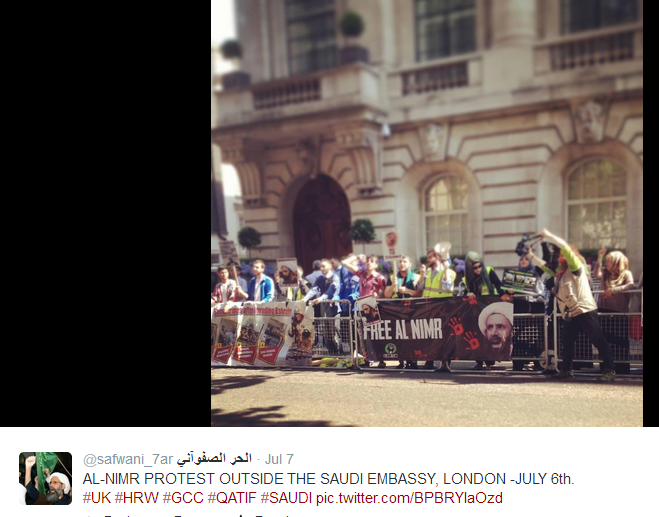 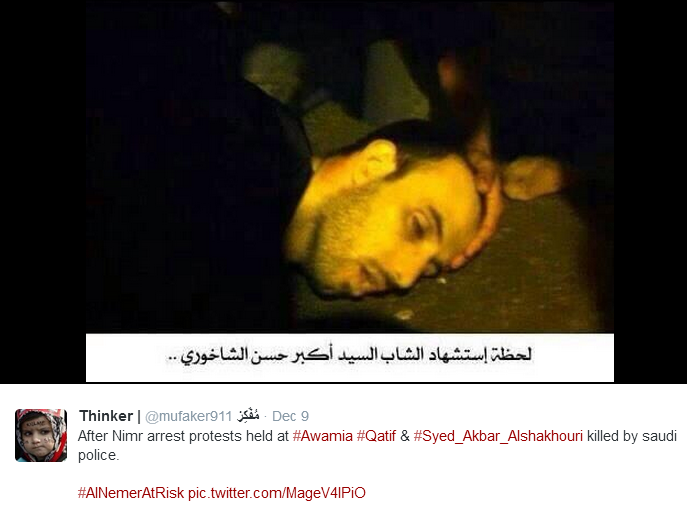 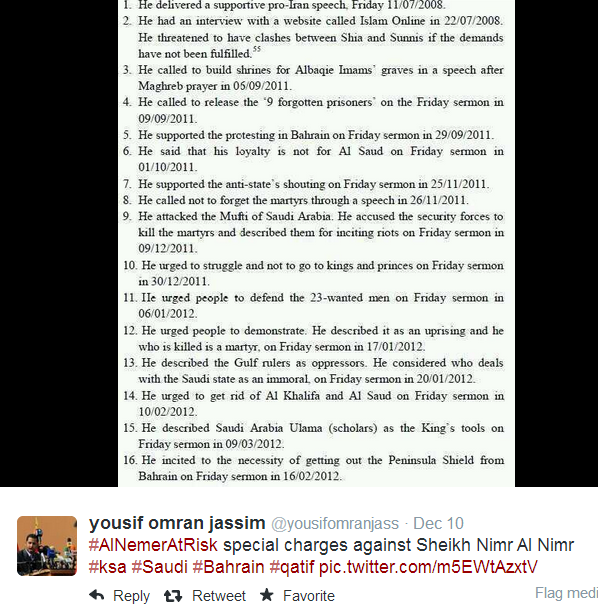 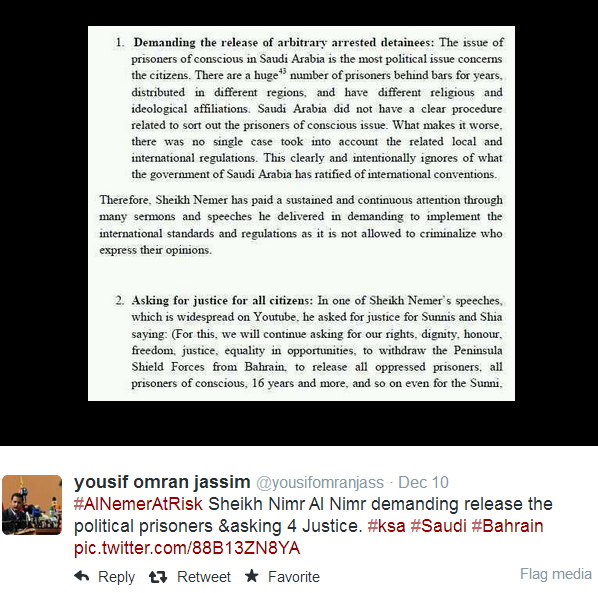 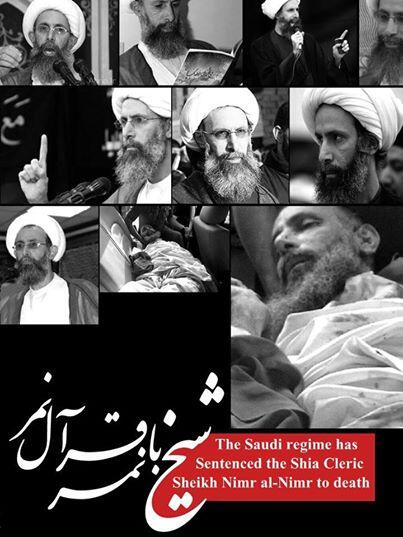 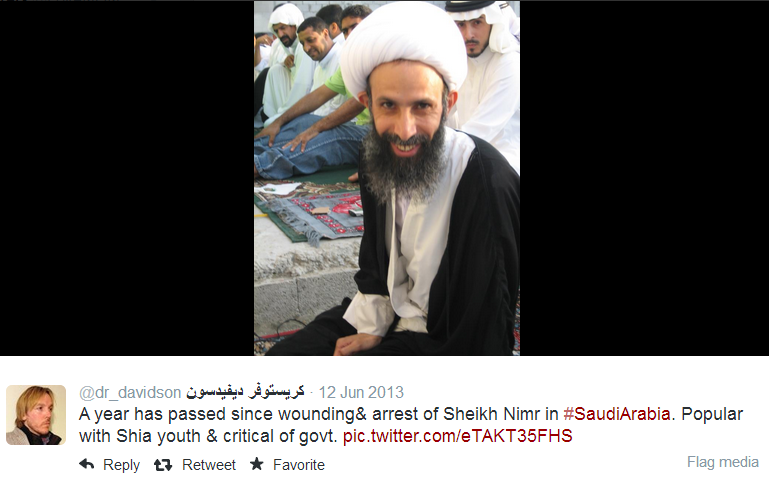 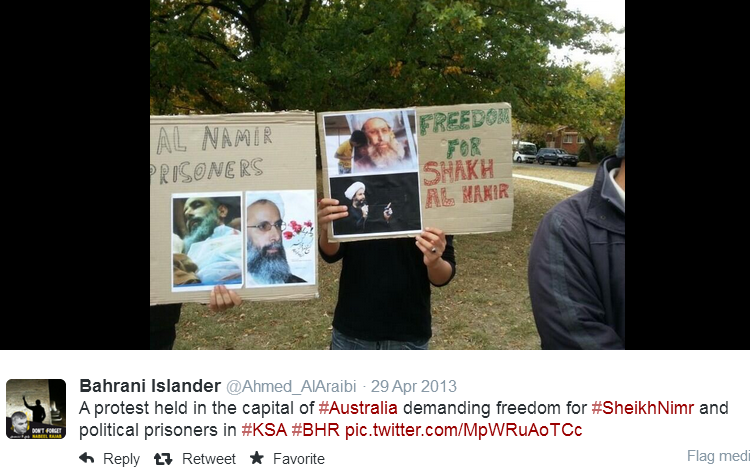 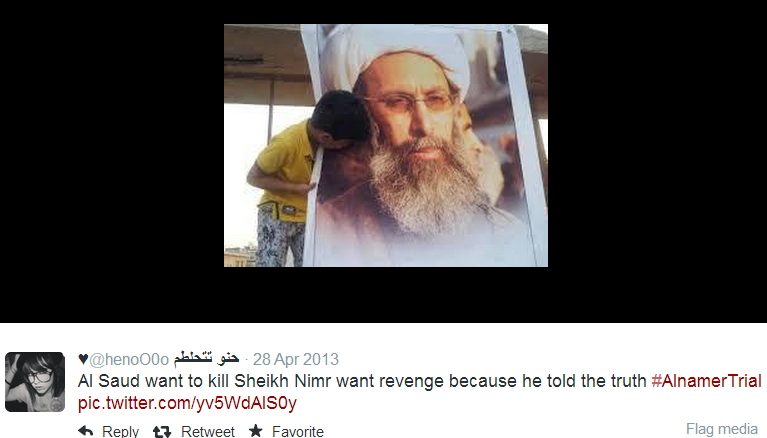 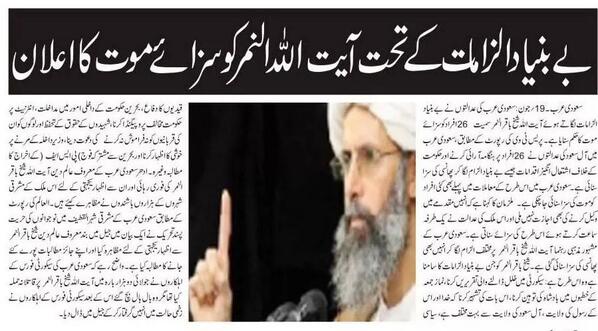 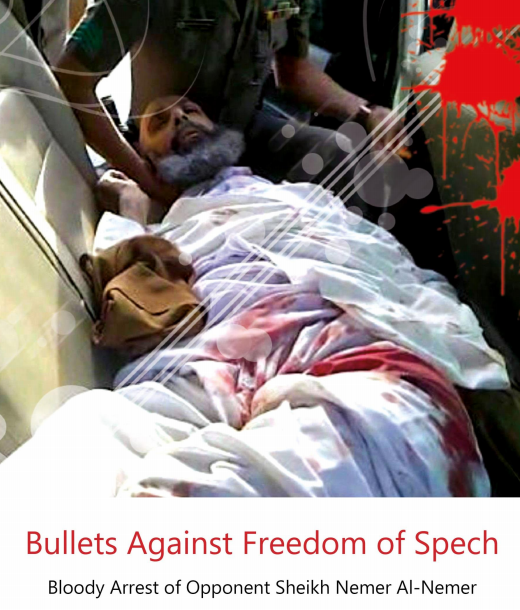 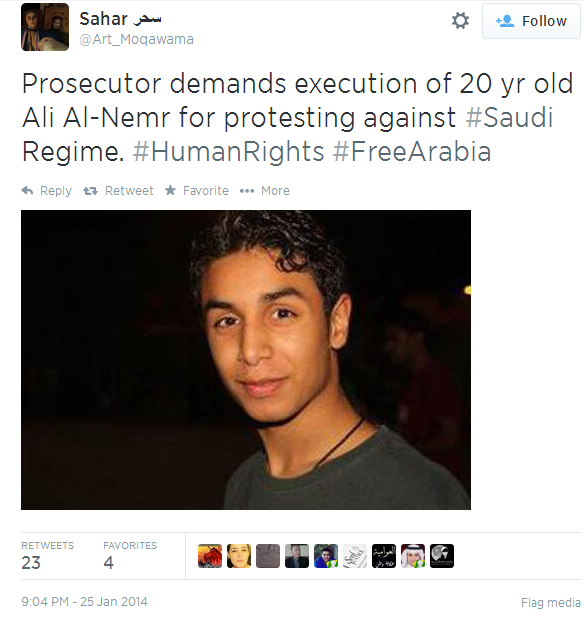 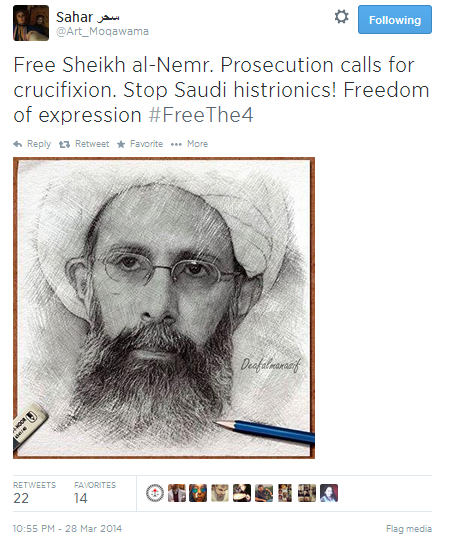 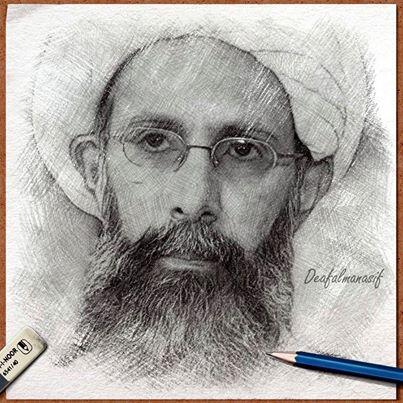 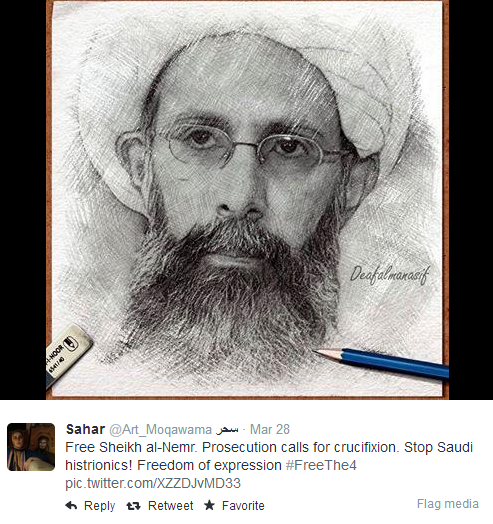 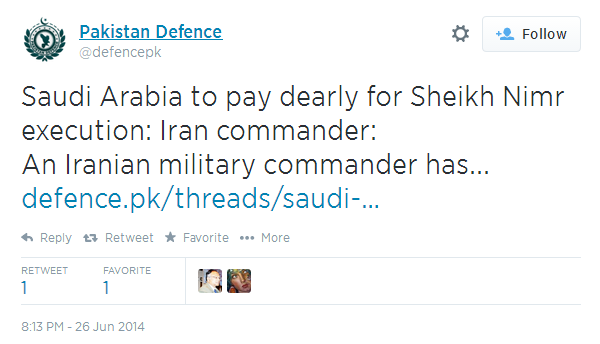 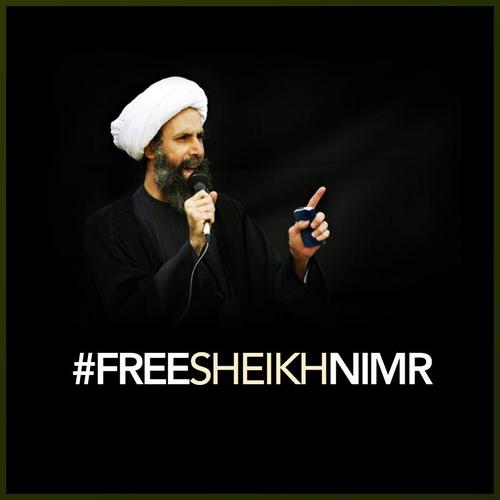 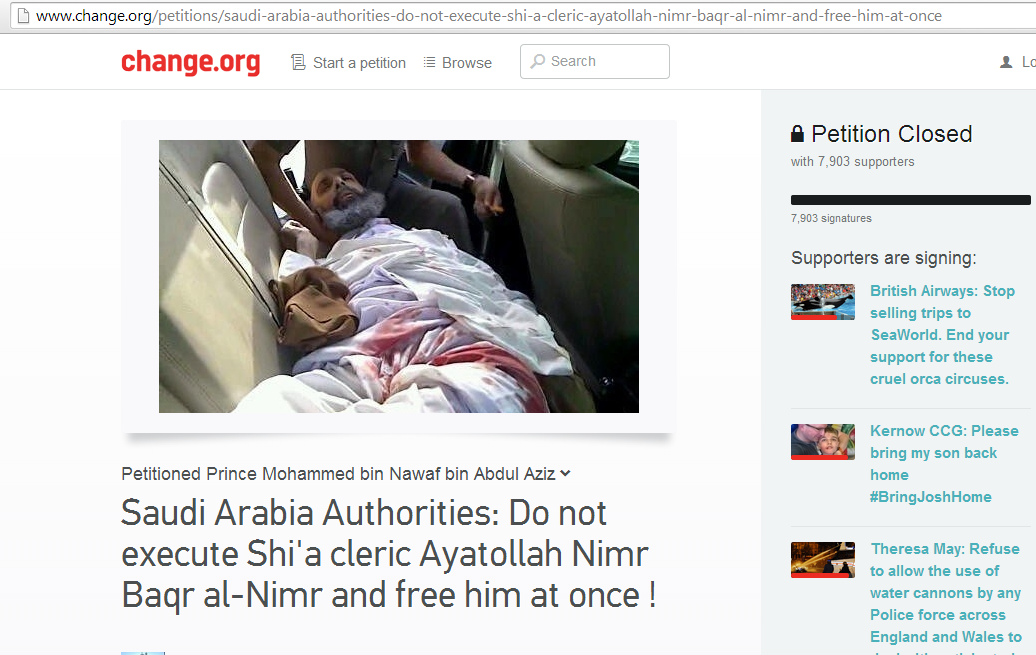 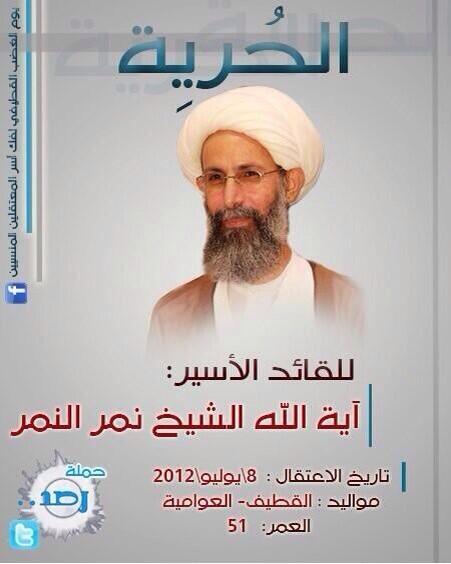 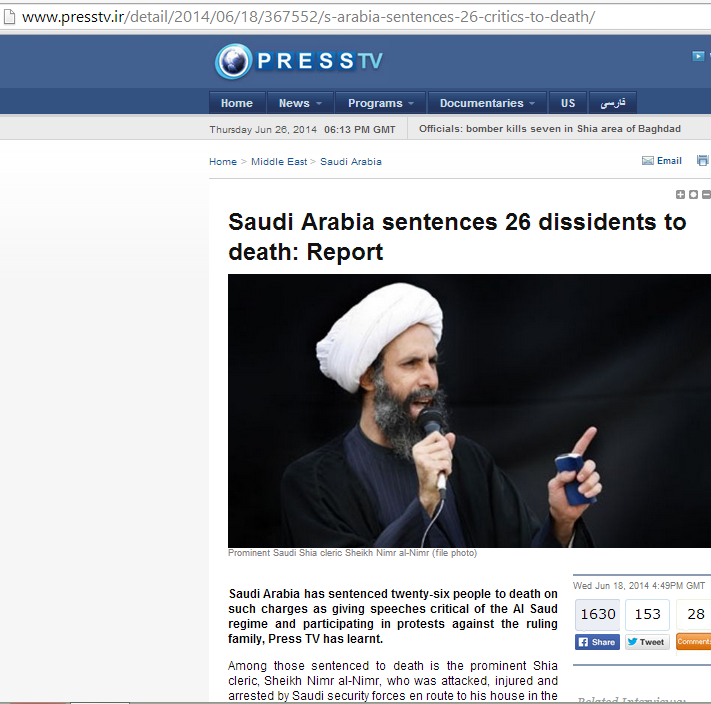 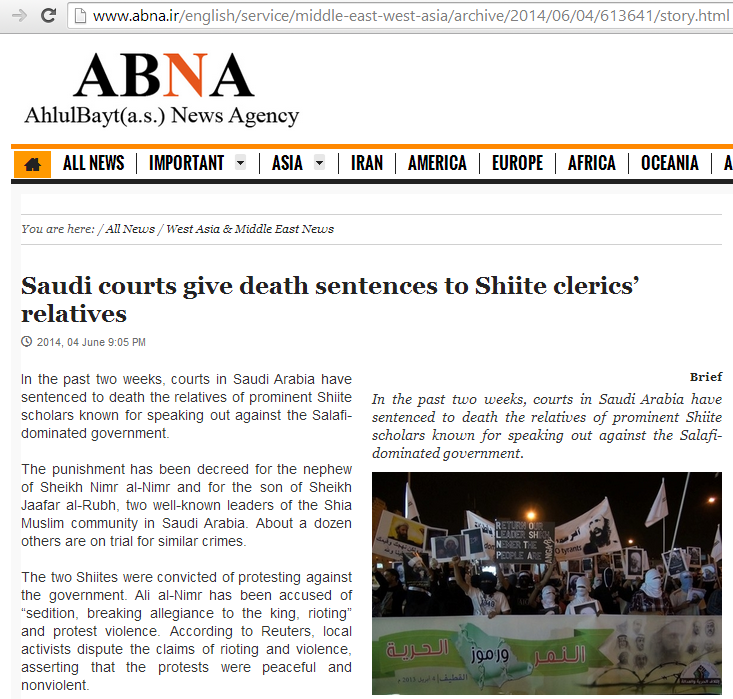