Pakistan’s English daily The Nation (of the Nawaiwaqt Group, known for sympathies to the pro-Tliban PMLN government led by Prime Minister Nawaz Sharif) published an article on 10 January 2013 which is full of hatred of Sunni Sufis/Barelvis and Shias. The article is currently in wider circulation by PMLN, Taliban, LeJ-ASWJ (banned Sipah-e-Sahaba) and other Deobandi and Salafi Wahabi web sites to discredit not only Dr Tahir ul Qadri but also spew venom against peaceful Sunni Barelvi/Sufi Muslims, Shia Muslims and brotherly Muslim country Iran.

The article attacks Sunni Barelvi leader Dr Tahir ul Qadri quoting some anonymous scholars of Egypt’s Al Azhar University, Cairo, without giving their names or reference. The article seems be posted from pro-Saudi Salafi-Deobandi web sites known for spewing venom against Sunni and Shia Muslims. The Islam Post, from which The Nation cross-posted this article, removed it in view of legal repercussion of such hate speech but such rules and considerations donot seem to apply in Pakistan.

The fact that the Salafi Wahabi or Deobandi author of this article ends his article with the paragraph: “Keep away from our homeland, the United States of America, as history shows that your intent is to exploit and undermine the hard works and sacrifices of American Muslims for the sake of the New World Order.” exposes the Saudi-Salafi-CIA agenda of the author and also the newspaper and web sites which are publishing this piece of hate.

One doesn’t have to be a Tahir ul Qadri supporter, a Sunni Barelvi or Shia to question the spewing of venom and false propaganda against Sunni Barelvis, Shias and brotherly Muslim country Iran. Is it too much to ask a daily newspaper to exercise responsibility in its journalism and not try to add to the ongoing hatred and genocide of Sunni Sufis/Barelvis and Shias at the hands of Deobandi and Salafi Wahabi terrorists of Taliban (TTP), Al Qaeda, Boko Haram, ISIS and Sipah-e-Sahaba (ASWJ).

We request the editors of The Nation to help this Nation of Pakistan, not destroy it.

As noted by Xain Gardezi, a Pakisani human rights activist:

1. This article is not even on The Islamic Post. Differebt online forums claim it with link of Islamic Post which does not exist:

The requested page could not be found.

3. The title seems to suggest that Al-Azhar scholars have condemned the scholar, but in the whole piece there is not a mention of even single scholar. Is this whole publication done by Al-Azhar? If so confirm it from their site (which can not be done since it isnt true).

4. Why no name of writer is given?

5. How can a national newspaper term practice of shias as ways of Satan? Does Nation officially declare itself as Pakistani newspaper or a Salafi Wahaabi or Deobandi one? 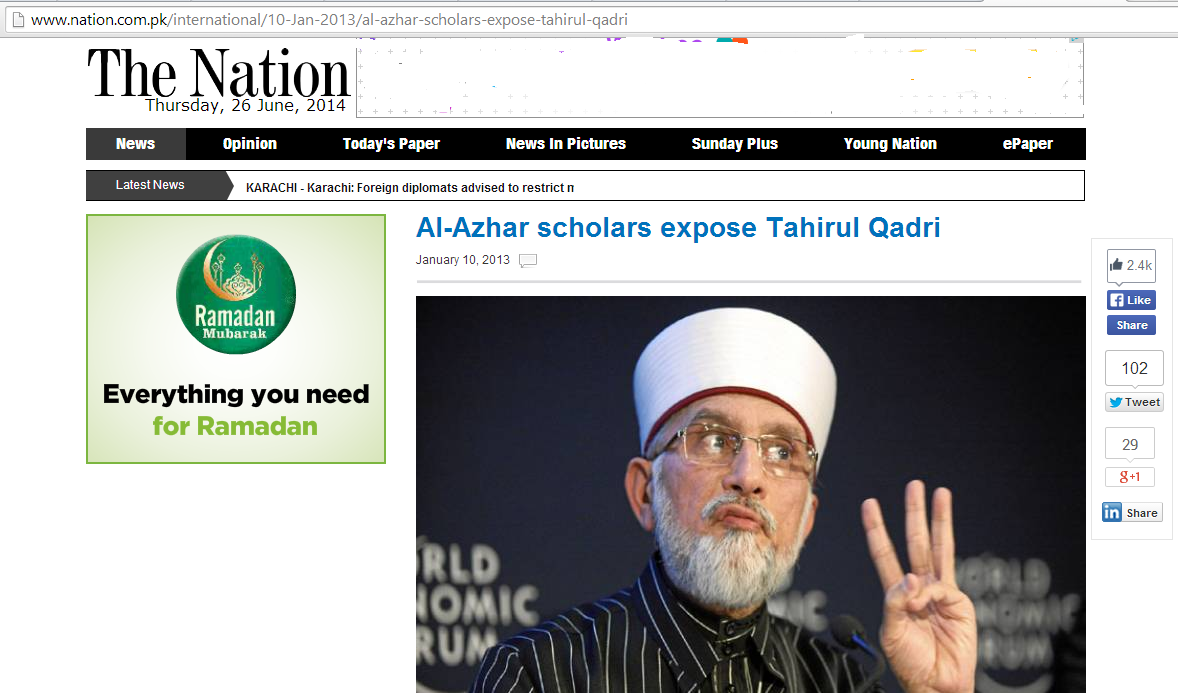 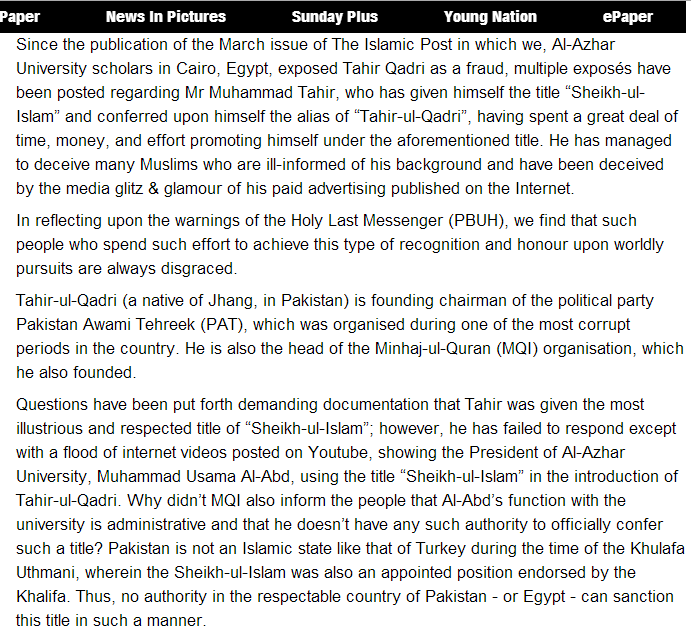 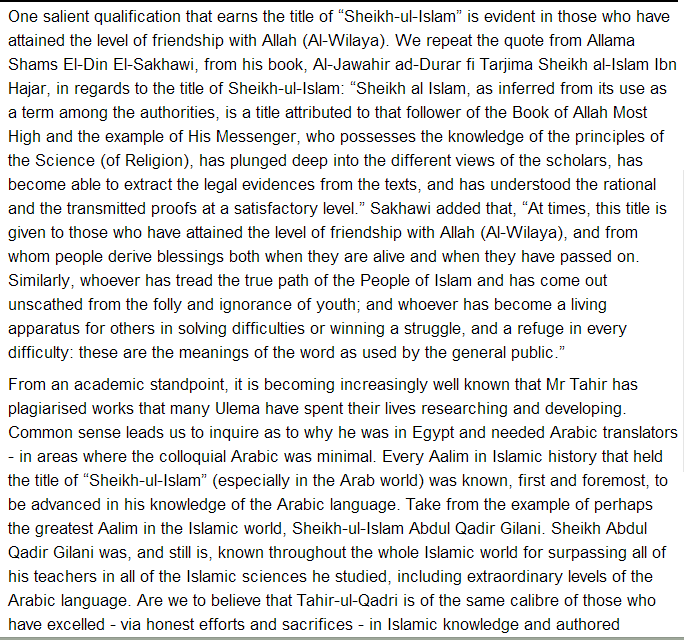 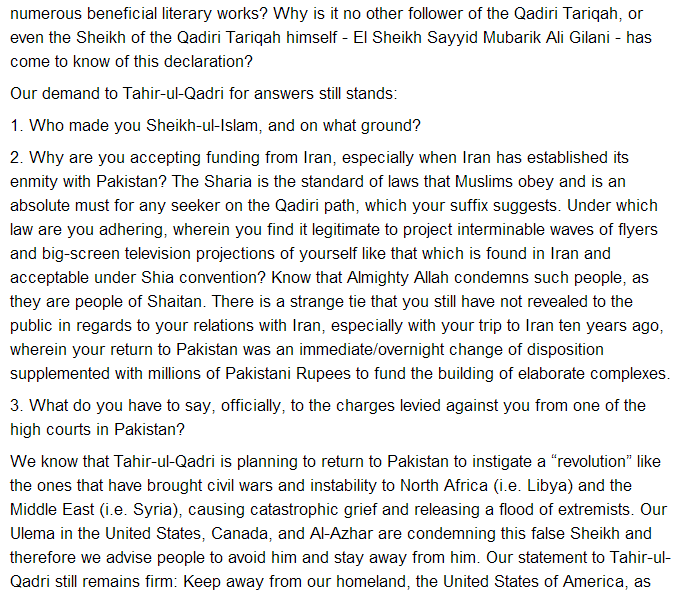 Full text of the hate article for archiving and evidence:

Since the publication of the March issue of The Islamic Post in which we, Al-Azhar University scholars in Cairo, Egypt, exposed Tahir Qadri as a fraud, multiple exposés have been posted regarding Mr Muhammad Tahir, who has given himself the title “Sheikh-ul-Islam” and conferred upon himself the alias of “Tahir-ul-Qadri”, having spent a great deal of time, money, and effort promoting himself under the aforementioned title. He has managed to deceive many Muslims who are ill-informed of his background and have been deceived by the media glitz & glamour of his paid advertising published on the Internet.

In reflecting upon the warnings of the Holy Last Messenger (PBUH), we find that such people who spend such effort to achieve this type of recognition and honour upon worldly pursuits are always disgraced.
Tahir-ul-Qadri (a native of Jhang, in Pakistan) is founding chairman of the political party Pakistan Awami Tehreek (PAT), which was organised during one of the most corrupt periods in the country. He is also the head of the Minhaj-ul-Quran (MQI) organisation, which he also founded.

Questions have been put forth demanding documentation that Tahir was given the most illustrious and respected title of “Sheikh-ul-Islam”; however, he has failed to respond except with a flood of internet videos posted on Youtube, showing the President of Al-Azhar University, Muhammad Usama Al-Abd, using the title “Sheikh-ul-Islam” in the introduction of Tahir-ul-Qadri. Why didn’t MQI also inform the people that Al-Abd’s function with the university is administrative and that he doesn’t have any such authority to officially confer such a title? Pakistan is not an Islamic state like that of Turkey during the time of the Khulafa Uthmani, wherein the Sheikh-ul-Islam was also an appointed position endorsed by the Khalifa. Thus, no authority in the respectable country of Pakistan – or Egypt – can sanction this title in such a manner.

One salient qualification that earns the title of “Sheikh-ul-Islam” is evident in those who have attained the level of friendship with Allah (Al-Wilaya). We repeat the quote from Allama Shams El-Din El-Sakhawi, from his book, Al-Jawahir ad-Durar fi Tarjima Sheikh al-Islam Ibn Hajar, in regards to the title of Sheikh-ul-Islam: “Sheikh al Islam, as inferred from its use as a term among the authorities, is a title attributed to that follower of the Book of Allah Most High and the example of His Messenger, who possesses the knowledge of the principles of the Science (of Religion), has plunged deep into the different views of the scholars, has become able to extract the legal evidences from the texts, and has understood the rational and the transmitted proofs at a satisfactory level.” Sakhawi added that, “At times, this title is given to those who have attained the level of friendship with Allah (Al-Wilaya), and from whom people derive blessings both when they are alive and when they have passed on.

Similarly, whoever has tread the true path of the People of Islam and has come out unscathed from the folly and ignorance of youth; and whoever has become a living apparatus for others in solving difficulties or winning a struggle, and a refuge in every difficulty: these are the meanings of the word as used by the general public.”
From an academic standpoint, it is becoming increasingly well known that Mr Tahir has plagiarised works that many Ulema have spent their lives researching and developing. Common sense leads us to inquire as to why he was in Egypt and needed Arabic translators – in areas where the colloquial Arabic was minimal. Every Aalim in Islamic history that held the title of “Sheikh-ul-Islam” (especially in the Arab world) was known, first and foremost, to be advanced in his knowledge of the Arabic language. Take from the example of perhaps the greatest Aalim in the Islamic world, Sheikh-ul-Islam Abdul Qadir Gilani. Sheikh Abdul Qadir Gilani was, and still is, known throughout the whole Islamic world for surpassing all of his teachers in all of the Islamic sciences he studied, including extraordinary levels of the Arabic language. Are we to believe that Tahir-ul-Qadri is of the same calibre of those who have excelled – via honest efforts and sacrifices – in Islamic knowledge and authored numerous beneficial literary works? Why is it no other follower of the Qadiri Tariqah, or even the Sheikh of the Qadiri Tariqah himself – El Sheikh Sayyid Mubarik Ali Gilani – has come to know of this declaration?

Our demand to Tahir-ul-Qadri for answers still stands:

1. Who made you Sheikh-ul-Islam, and on what ground?
2. Why are you accepting funding from Iran, especially when Iran has established its enmity with Pakistan? The Sharia is the standard of laws that Muslims obey and is an absolute must for any seeker on the Qadiri path, which your suffix suggests. Under which law are you adhering, wherein you find it legitimate to project interminable waves of flyers and big-screen television projections of yourself like that which is found in Iran and acceptable under Shia convention? Know that Almighty Allah condemns such people, as they are people of Shaitan. There is a strange tie that you still have not revealed to the public in regards to your relations with Iran, especially with your trip to Iran ten years ago, wherein your return to Pakistan was an immediate/overnight change of disposition supplemented with millions of Pakistani Rupees to fund the building of elaborate complexes.
3. What do you have to say, officially, to the charges levied against you from one of the high courts in Pakistan?
We know that Tahir-ul-Qadri is planning to return to Pakistan to instigate a “revolution” like the ones that have brought civil wars and instability to North Africa (i.e. Libya) and the Middle East (i.e. Syria), causing catastrophic grief and releasing a flood of extremists. Our Ulema in the United States, Canada, and Al-Azhar are condemning this false Sheikh and therefore we advise people to avoid him and stay away from him. Our statement to Tahir-ul-Qadri still remains firm: Keep away from our homeland, the United States of America, as history shows that your intent is to exploit and undermine the hard works and sacrifices of American Muslims for the sake of the New World Order.
–The Islamic Post (The Nation)