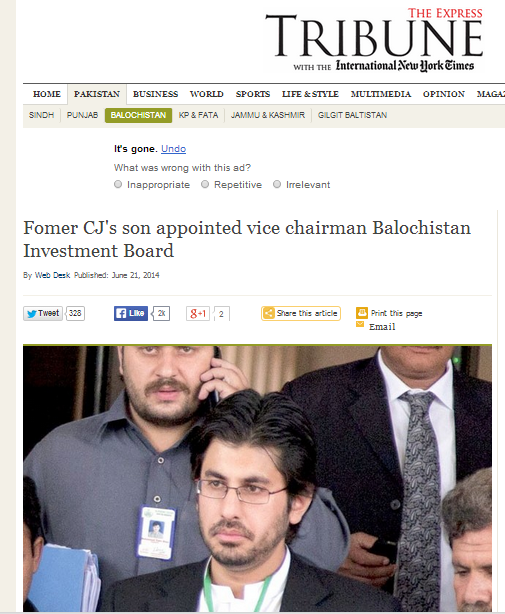 According to fundamental Islamic principles, Ihsaan (benvolence) is the best return of Ihsaan. It’s therefore no surprise that as a gesture of Islamic payback, PM Nawaz Sharif appoints fromer CJ’s son as vice chairman Balochistan Investment Board

Anyone who dares to critisize this appointment is an opponent of Noora Democracy!

Noora Democracy is a particular Pakistani brand of democracy that revolves around the ideological family of General Zia ul Haq Shaheed and enjoys generous backing and petro-dollars of Saudi Holy Salafi Arabia. For Noora Democracy, any criticism is like Kryptonite. So, to the Non-Jang/GEO media: SHUT UP! Or PCO Judges will gag you!

In other related news, the biggest danger to Noora Democracy, at least 25 Sunni Barelvi Terrorists of Minhaj ul Quran (aka Pakistan Awami Tehreek) have been “neutralized”. Congratulations to “good liberals” on identifying the threat from the Anti-Taliban faction lead by Tahir ul Qadri. We need “good liberal”s to continuously connect Mumtaz Qadri (token Barelvi) to Tahir ul Qadri but to deliberately ignore and obfuscate that the Blasphemy Law was passed by Nawaz Sharif, and also the fact that 99% of Jihadist activities (misidentified as terrorism) in Pakistan are a Deobandi phenomenon. Shahbash

The Mullah Omar Weekly called the MuQ faction as the most deadly terrorist force in Pakistan after the LoL Brigade (Google Lyari o Larkana Brigade) and the Al Zulfiqar Faction of the 1970s. The Yazeed Group recently highlighted the stockpile of Qurans and State of the art 3×4 bricks weaponary current in possession of the TuQ “militias”.

The Ludhainvi Malik Ishaq “Peace” Movement (aka ASWJ-LeJ) who also supported the “embattled” Lahore police in its latest “standoff” with the TuQ militias, has highlighted the TuQ as the most deadly anti-Taliban movement in Pakistan, followed closely by the SIC-MWM lead Sunni-Shia-Christain-Hindu-Sikh alliance under the “Shuhda Conference”. Similarly, the DPC “Peace Corps” has also come out against TuQ.

We must all join hands in protecting Noora Democracy from the vicious barbs of Tahir ul Qadri Canadvi. The idea of mass peaceful protests is anathema to the fragile Noora Democracy which only has the judges in its pockets and the media, PEMRA and police in its payroll and the Jeffersonian Monarchal Democracy of Saudi Arabia as its primary backer.

To all Good Liberals, please lets hold hands and let’s back our police, judges and Deobandi ASWJ in squashing dissent. For dissent is against the spirit of Good Liberalism and Noora Democracy

In the meanwhile do not be too sad by the fact that Rana Sanaullah has been nominally and temprorily removed from the Law Minister poistion in Punjab. Get solace from the fact that his first cousin’s son has been made vice chairman Balochistan Investment Board. For Mushrik Sunni Barelvis and Kafir Shias, more genocide is on the way!