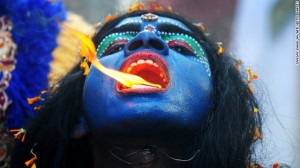 Suhag Shukla knows that’s how some people outside Hinduism see her religion. As the head of the Hindu American Foundation, Shukla, 42, clarifies misconceptions all the time.

Hinduism is ancient, though there is no specific date for when it was formed. The name is a Sanskrit word; Hinduism and Hindu were coined by invaders who used the terms to refer to the people they encountered when they crossed the Hindu Kush mountains and arrived at the Indus River.

Hotel Death: It’s a place of celebration and salvation for souls

In America, Hinduism’s profile was elevated by Indian immigrants who brought their customs and rituals with them and perhaps most recently, by the growing popularity of Hindu teachings like yoga and meditation.

Hinduism is the world’s oldest living religion and the third largest – behind Christianity and Islam – with more than 1 billion followers. Some argue that Hinduism is more a way of life than religion. It has no common creed or church. Nor is it based on the teachings of a founder or holy book.

And it remains a mystery for many.

Reality: There is one supreme God that cannot be fully known or understood.
Hindus are encouraged to relate to God in the way that suits them best, like worshipping many deities who are believed to be manifestations of God. The trimurti or three main deities are Brahma, the creator; Vishnu, the preserver; and Shiva, the destroyer. That’s why Hinduism is often thought of as polytheistic. It is not.

But there’s debate on the proper terminology for Hinduism. Some call it a monistic religion, derived from the belief that everything in the universe is part of one substance or nature. Some, including Shukla, say Hindusim is henotheistic, which is the worship of one god without denying the existence of other gods. Others, say it is monotheistic.

Myth No. 2: Hindus are idol worshippers.

No Hindu will say he or she is worshipping an idol. Instead, Hindus believe a physical representation of God – in the form of an idol – helps them focus on an aspect of prayer or meditation. For instance, a person who has just opened up a new business may worship Ganesh, the elephant god who represents success.

Reality: Hindus do not pray to cows but they do regard all creation and all life as sacred.

Hindus believe every living thing has a soul. It is true, however, that cows hold a special place in Hindu society. That’s why Hindus refrain from eating beef. Cows are seen as gentle, maternal figures that are providers of milk and other forms of sustenance. They are honored for their value.

Myth No. 4: All Hindus are vegetarians.

But about 30 percent do not. That stems from a fundamental belief in ahimsa, the principle of non-violence. Since all living things are manifestations of God, violence against them is considered contrary to the natural balance of the universe.

Reality: Caste discrimination is rooted not in religion but culture.

Caste was an ancient system of occupational class delineated in Hindu texts that over the years developed into a rigid social hierarchy. The lowest castes, or untouchables, were marginalized and faced persecution. But many modern Hindus have argued that caste-based discrimination is not intrinsic to Hinduism and should not be thought of as religiously sanctioned.

Myth No. 6: Women are subservient in Hinduism.

Reality: Not because of religion.

Actually, one attribute that differentiates Hinduism from say, Christianity or Islam, is that it recognizes forms of god as feminine. Hindus revere Shakti, or the personification of God’s energy through a female figure.

Some of the most commonly worshipped goddesses are Parvati, a primary form of Shakti; Saraswati, the goddess of wisdom; and Lakshmi, goddess of prosperity.

Women in India may not be equal with men but again, that is not because of religion but culture and people using religion to keep women down. This is akin, perhaps, to Islamic societies forcing women to cover up from head to toe.

“I don’t think there is a basis to disregard women in our religion,” Shukla says. “The Vedas (scripture) don’t give those instructions.”

Myth No. 7: Hindu women wearing ‘red dots’ on their foreheads are married.

A red dot was once a symbol of marriage for Hindu women. Today, the dot, or bindi, is largely decorative. Girls and women – married and single – wear bindis of all colors as fashion statements. A tilak, also a mark on the forehead, has religious significance. It’s generally made with sandalwood paste, ashes or red turmeric and can be in the form of lines or a dot.

Myth No. 8: The Bhagavad Gita is like the Bible.

Reality: There is not one central, authoritative book in Hinduism.

But Hinduism is rich in scripture with a vast collection of ancient religious writings. Hindus believe god revealed truths to wise men who passed them on for thousands of years through a rich oral tradition. The scriptures include the Vedas, the Upanishads, the Puranas and the Bhagavad Gita, or Song of God.

Part of the epic tale, Mahabharata, the 700-verse Gita is the world’s longest poem and takes the form of a dialog on a battlefield between a prince, Arjuna, and Krishna. It captures the core beliefs of Hinduism but not all Hindus read the Gita.

Myth No. 9: Karma is fatalistic.

Reality: Everyone has the ability to choose life’s actions.

This is the theory behind karma: for every action a person sets in motion, there is a corresponding reaction. Hindus believe they have to face the consequences of past actions. Each person creates his or her destiny with deeds. The ultimate goal is to have karma that will free a soul and gain moksha, or liberation from the cycle of rebirth.