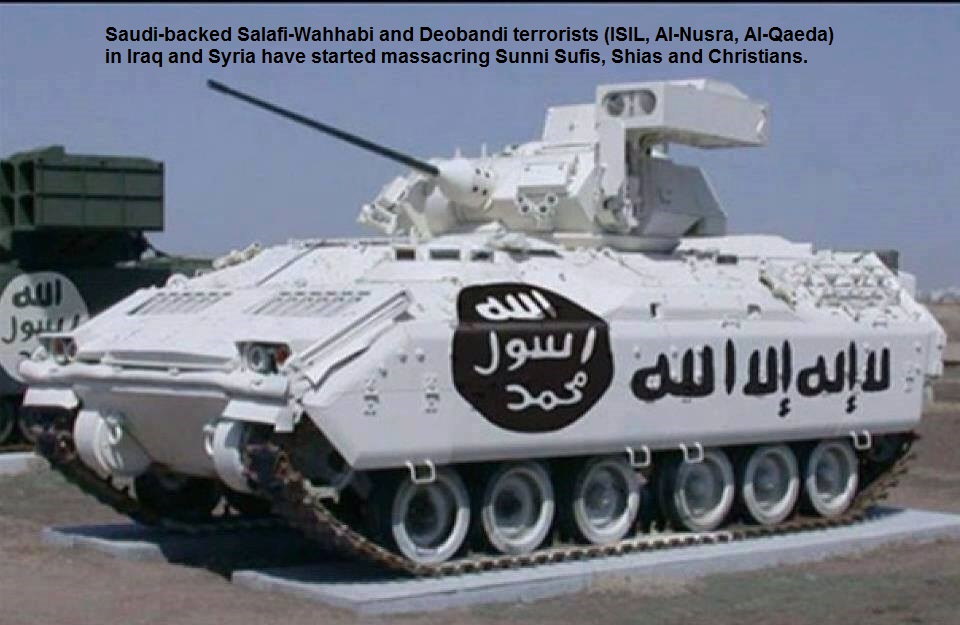 The Salafi-Wahhabi and Deobandi Spring, aided by Saudi petro-dollars, Western media and CIA, has finally made it to Iraq via Libya and Syria, while also leaving important footprints in Egypt and other countries.

In Libya, US happened to support Al Qaeda with a bombing campaign and sometime latter, after ensuring Al Qaeda victory, US ambassador there is gruesomely killed by same Al Qaeda who also did 9/11.

Sometime later in 2011, FSA (Free Syrian Army) emerges from nowhere. The media wing of FSA is made up of few bloggers and supported by Saudi Arabia, while CNN and BBC paint them as “secular” nationalist leftists protesting against Bashar Al-Assad. FSA made up of purchased army defectors to provide cover to various Al Qaeda fronts of Salafi-Wahabi and Deobandi fighters, imported from Jordan, Lebanon, Pakistan, Saudi Arabia etc, who chew livers and destroy thousands of years old Christian Holy Sites while also massacring thousands of Sunni Sufis and Shias. Yahoo briefly reported how senior US senator John McCain posed with the same Al Qaeda who were alleged to have kidnapped and tortured Shia and Sunni Sufi pilgrims in Syria- similar to current Pakistani Interior Minister’s recent pose with ASWJ-LeJ leader (Muawiya Azam Tariq Deobandi) which also likes to massacre Shia Pilgrims.

Horrible chemical attacks takes place in Damascus which are first blamed on Assad regime but later on trail goes cold and Assad even surrenders his chemical weapons amid atleast one report published in the UK which states that Syrian Al Qaeda opposition wanted to do the attack and blame it on Assad and then drag the US into this conflict.
UN report stops short of conclusively blaming Assad. Meanwhile in Iran, wacko Ahmadinejad replaced by more moderate Rouhani restarted negotiations between Iran and US which start showing results of long term PEACEFUL relations btw the two countries.

Saudia, which is entering a succession struggle goes even more ape shit and intensifies Salafi-Wahhabi and Deobandi proxies in their phobia of Shias, Sunni Sufis and Christians. Meanwhile in Syria, Assad Regime with some help from Russia and Lebanon hands a thrashing to Saudi-Qatari-Turkish-Jordanian-Pakistani-European-American Al Qaeda. Emboldened Putin shows finger to Saudia, a long time US ally and at the same time, the chief backer of Al Qaeda. Putin now goes further and revives hostorical claim on Crimea and makes a move.

After various Salafi-Wahabi, Deobandi outfits (Al-Nusra aka FSA aka Al Qaeda, ISIL/ISIS etc) lose most of Syria and dictator Assad wins another election against his organ eating foreigner opposition, FSA-Nusra-ISIS turns to Iraq led by the spineless and incompetent Noori Al Maliki whose 35,000 troops, many of them of Baathist background, leave Mosul to less than 1000 FSA, ooops ISIS. Just like Pakistani army surrendered an army fort in FATA in 2007 when it outnumbered Taliban 5 to 1. The closest parallel to the Noori Al Maliki Iraqi Government is the Bilawal Bhutto Zardari/Qaim Ali Shah PPP Provincial Government of Sindh which has also surrendered to the Taliban and Al Qaeda (in the form of ASWJ-LeJ led by Aurangzeb Farooqi in Karachi).

Which brings us to present where US, despite all moral and political obligations, may refuse to act to confront Al Qaeda in Iraq because this will go against the interests of its ally, Saudi Arabia.

If the US confronts Al Qaeda, it will be helping Iran and even itself. It will be hitting back at the same group that brought it 9/11, Fort Hood and Boston Marathon bombing. If it stops even token support of the FSA, ooops, ISIS in Syria, it will ensure the long term defeat of Al Qaeda. Or the US can allow itself to be led on even further by its ally, Saudi Arabia and … and end up in establishing a Salafi-Wahabi and Deobandi Caliphate in parts of Iraq and Syria where there will be no room for Christians, Western citizens, Sunni Sufis, Shias and other minority groups.