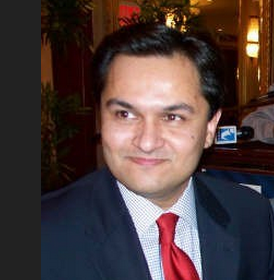 If the rise in fascist tendencies were sporadic, the concern might have been a notch lower. However, the way religious zealots were unleashed over the last several weeks, in what appears an orchestrated move by a well-oiled machine, is alarmingly ominous

Yet another one of the best and brightest has been killed. Dr Mehdi Ali Qamar was mowed down in Chenab Nagar, formerly known as Rabwah, in front of his wife and their two-year-old son as he was leaving the Ahmedi graveyard there. He was an accomplished cardiologist, an artist, a poet and, above all, a humanist by all accounts. Along with his family, friends and those who he served so diligently, the Pakistani-US physician community at large is in mourning.

He was one of us. The president of the Association of Physicians of Pakistani-descent of North America (APPNA), Dr Asif Rehman, has denounced the brutal murder in a letter and said, “Dr Qamar was the casualty of targeted attacks on Ahmedi Muslims.” In a letter circulated to the APPNA members, Dr Rehman has pledged to raise the issue with the Pakistani ambassador in Washington, DC, and with the US State Department.
APPNA’s campaign, though timely and well meaning, may not yield much more than the routine condemnations and pledges by officials. Mehdi was not the first doctor to be killed solely because of his faith and, unfortunately, he will not be the last. Earlier this month a Shia physician, Dr Faisal Manzoor, was killed in Hasan Abdal, like hundreds before him. These murders are not a one-off occurrence.

The targeted sectarian eliticide, i.e. eliminating the pre-eminent and productive male members of the Ahmedi and Shia communities is now a norm in Pakistan. Doctors, lawyers, bankers, police officers and other professionals have been targeted with the clear intent to instil fear in the remaining community members, forcing them to restrict their activities, conceal their faith or leave their hometowns. While there are no laws prejudicial to the brutally battered Shias, the apartheid against the Ahmedi community remains constitutionally sanctioned in Pakistan.
Section 298-C of the Pakistan Penal Code (PPC) proscribes “the propagation of faith by the Ahmedis” while section 298-B forbids “misuse of titles reserved for holy personages or places”, and is also aimed at the same hapless community. Both offences are punishable by a three-year prison term and fine. Ironically, the same chapter of the CPC also lists disturbing a religious assembly and trespassing on a burial place as punishable offences. One wonders if these clauses also apply to the June 2010 attacks that killed a hundred Ahmedi worshipers or the routine desecration of their graves, including the tomb of the Nobel laureate Dr Abdus Salam. None of this could have been lost on Mehdi but he still ventured back home to provide free medical care there.

Mehdi perhaps did not realise that the hatred against his sect, which has long been codified in the law and preached from the pulpit, has now taken a much more virulent and public form. Messages like “We do not serve Ahmedis” or “Ahmedis not allowed” displayed by small businesses are becoming a common feature, mostly in Punjab. This confessional state seems to be on the road to becoming a fully-fledged ‘Fascistan’.
A hyper-nationalist Pakistani identity, made with equal parts of ideology, religion, jingoism and the double delusions of grandiosity and paranoia, has devoured much of the country’s political and religious diversity, and threatens to eliminate whatever is left of it. Parallels with post-World War I Germany are frightening. Like pre-Nazi Germany, instead of an honest introspection after sustaining humiliating defeats in both wars and diplomacy over the years, the Pakistani state went looking for scapegoats and conspiracies. Fantastic analyses with equally preposterous solutions smack of what the philosopher Sam Vankin has called a “collective pathological narcissism”.

The self-aggrandisement without any material evidence to support such delusion runs rampant in the Pakistani polity. What exactly is the contribution to humanity and the world community that merits such self-importance? Forget any peacetime contribution, even the nuclear weapons that the country boasts of or assault rifles that the jihadists use have been copied or borrowed from somewhere else.

Yet the demand for admiration knows no bounds. And then there is the sudden dive into a national paranoia that the world is somehow out to ‘get’ Pakistan. Like the Nazis blamed and then purged the socialists, communists, gypsies and the Jews, large sections of Pakistani society have marked their targets too. As Adolf Hitler blamed the economic misery of the Weimar Republic on the Jews, the zealots in Pakistan pin the country’s instability on conspiracies that the Ahmedis and others allegedly hatch with the US-Indo-Zionist agents.
If the rise in fascist tendencies were sporadic, the concern might have been a notch lower. However, the way religious zealots were unleashed over the last several weeks, in what appears an orchestrated move by a well-oiled machine, is alarmingly ominous. Blasphemy charges were levelled with utter impunity against a media group to force it into submission.

The fanatics in the media and the streets who made common cause with an intelligence agency that had felt slighted by the beleaguered media group, were never disowned. Deploying the boundless power of hate to seek redress for a seemingly genuine grievance was recklessly sinister. Anathematising, ostracising and then physically eliminating is the name of the deadly game these hordes have been trained to play.

Unfortunately, it has not ended yet. The same shrieking voices are out in full force berating Prime Minister Nawaz Sharif for attending Indian Prime Minister Narendra Modi’s inauguration. Individuals, groups, sects or political parties; no one is exempt. If they do not fit the bill for the hyper-nationalism anchored in religious chauvinism and anti-India jingoism, they are fair game.
Whether such vitriol is officially encouraged is not known.

However, former and in some cases sitting officials seen consorting with the bigots of the tallest order suggests that at the very least, the wheels within the wheels have something to do with these machinations. Whoever is egging on these fanatical characters is perhaps willing to accept cases like the death by stoning of the pregnant lady by her own family just outside the Lahore High Court, where a religio-cultural sanction is always at play.
German society, on the eve of the Holocaust and the purges of the gypsies, perhaps did not look much different than what is on display in Pakistan today. A vast majority of Germans were content or pleased with Hitler and his stigmatisation methods. The road to ‘Fascistan’ is paved with the wholesale demonisation of writers, poets, politicians, media persons, religious minorities and even austere Muslims. Could Pakistani society extricate itself from the morass it is plunging into? With fine human beings like Mehdi getting slaughtered regularly, the chances are appearing slimmer.