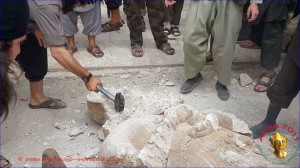 Don’t be surprised if it reminds you of the Deoabndi Taliban destroying Buddha statues a few years ago. This is an ideology that views the collective human heritage with hate and disdain as if the human civilization began only with the advent of Islam with Prophet Mohammad. Wahabbi violence has resulted in the wanton destruction of historical treasures in many other countries also. This has nothing to do with politics. This is Wahabbi (Salafi/Deobandi) extremism, intent on destroying all other beliefs. Not long ago, in Maldives their cohorts stormed the museum and destroyed its display of priceless artifacts from the nation’s pre-Islamic era. Similar instances have also been observed in Iraq and Mali. Pakistan has destroyed most of its Hindu and Buddhist temples. Pakistani history text books begin with the coming of Muslims to the Indian subcontinent, totally ignoring the Hindu and Buddhist history of the past. These people do not have the IQ to appreciate their own history! Savages, is the only way to describe them. Taliban blew up schools and Boko Haram kills and kidnaps innocent students for the crime of pursuing education. Clearly their intolerant faith doesn’t teach them anything about older faiths and beliefs and trying to live in peace and harmony with other human beings on this planet. We also note with great interest that when the Taliban announced the destruction of the Buddha statues of Bamiyan at the end of the year 2000 in Afghanistan, a wave of protest went around the world. In all Western countries, the cultural scene was bewildered and tried to stop the destruction with helpless appeals to the Taliban. On the other hand it is quite perceptible how muted the protests in the West have been to the acts of desecration perpetrated by its own Wahabbi touts in Syria. This shows the double standards of the West, completely devoid of moral or principled moorings, and is probably the reason why no one in the ‘cultural industry’ is interested in these barbaric acts of Wahabbi terrorists in Syria.

It has been argued that destruction of Buddaha Statues in Afghanistan created resentment and ensuing violence against the Rohingya Muslim community of Burma. Prior to 2000 the Buddist and Muslims had co-existed relatively peacefully. The Saudi propagation of the intolerant and literal Islam is at the heart of this global problem. The problem will only increase, the longer the pulpit of Mecca and Medina or the biggest megaphone in the world of Islam is allowed to be hijacked by the literal cult.

As it would be the bad Karma for destroying the Buddha statues destroyed the Taliban the same year. May the same fate befall these ignorant bigots in Syria!

(AINA) — According to a report from the website www.apsa2011.com, the Islamic State of Iraq and the Levant (ISIL, also known as ISIS) has destroyed Assyrian statues and artifacts believed to be 3000 years old.

The Assyrian archaeological artifacts were illegally excavated from the Tell Ajaja site.

Looting of Assyrian artifacts was also carried out in Iraq soon after 2003 by Al-Qaeda, which sold the artifacts to finance its operations. The looting occurred at the Baghdad Museum (AINA 2003-04-19) as well as archaeological sites which were left unguarded as a result of the collapse of the government of Saddam Hussein (AINA 2005-02-17).