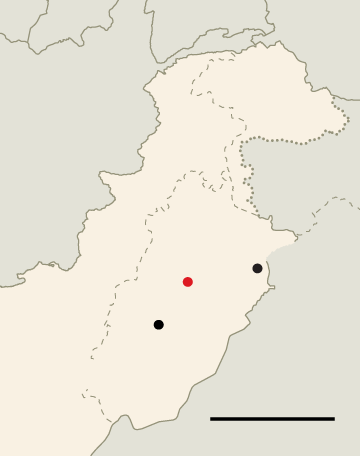 Editor’s note: The ridiculous “Jahalat” of Takfiri Deoabndi Lidhanvi and his ilk is apparent in this article. Lawyers  with names like Ali Usman and Muhammad were thrown in jail for protesting against someone by the name of Umar. The legal system of Pakistan has become a joke. A short cut maybe to declare the entire country a blasphemy jail for the Deobandi establishment.

ISLAMABAD, Pakistan — In the latest blasphemy case to highlight growing intolerance in Pakistan, the police in Punjab Province said Tuesday that they had filed blasphemy charges against a group of 68 lawyers at the instigation of a Deobandi extremist leader.

The mass charging was an unusually wide application of Pakistan’s colonial-era blasphemy law, which carries a potential death sentence. But it was consistent with what human rights groups call an increasingly frequent abuse of the law to settle scores, silence opponents or persecute minorities, and comes at a time when freedom of expression in Pakistan is under concerted assault from extremists.

Mr. Rehman’s family suffered directly from the blasphemy laws last week. His nephew, a prominent defense lawyer and rights activist named Rashid Rehman, was shot dead in the southern city of Multan, weeks after he received death threats for defending a university lecturer accused of blasphemy.

The case against the 68 lawyers occurred in Jhang, a district in central Punjab that has a history of sectarian upheaval and is the birthplace of Sipah-e-Sahaba Pakistan, one of the country’s most virulent Sunni (deobandi) extremist groups, which has since been renamed  Ahle Sunnat Wal Jamaat and was banned in 2012.

On May 7, dozens of lawyers, mostly from the country’s Shiite minority, staged a street protest against a senior police official, Umar Daraz, according to the police and lawyers. The lawyers said Mr. Daraz had detained and beaten a lawyer after arguing with him.

The police removed Mr. Daraz from his position in response to the complaints. But the lawyers continued their protest for several days, urging the police to arrest Mr. Daraz and several of his subordinates.

The lawyers shouted insults at Mr. Daraz, sometimes calling him a dog, a frequent occurrence in Pakistani protests. They also referred to him by his first name — one that is common in Pakistan but is also shared by Umar Farooq, a revered historical figure in Islam who was a companion of the Prophet Muhammad in seventh-century Arabia.

The leader of Ahle Sunnat Wal Jamaat, Maulana Muhammad Ahmed Ludhianvi, was at the police station during one of the protests. He claimed the lawyers were shouting and insulting the name of the religious figure, not the police officer, said the town police chief, Zeeshan Asghar, in a phone interview. Mr. Ludhianvi recently entered electoral politics, and though he has said he renounced violence, critics of his group say he has continued to whip up anti-Shiite sentiment.

A few days later, one of his associates lodged a formal blasphemy complaint against the 68 lawyers. Eight of the lawyers were named in the police report, but the other 60 were unidentified, a common practice in Pakistan aimed at giving leverage to the complainants.

“Call it our bad luck,” said Mr. Asghar, referring to the presence of Mr. Ludhianvi (takfiri deobandi hate monger) during the protest.

Muhammad Afzal Sial, president of the local bar association, insisted the lawyers had not intended any offense to Islam. “Our lawyers only named only the police officer, but certain elements tried to exploit the situation,” he said in a phone interview.

Blasphemy cases have become more frequent in Pakistan, often in absurd circumstances, underscoring how a law intended to protect against religious intolerance has become a tool of bigotry. That also makes it a minefield for judges, journalists, police officers and lawyers, for whom one wrong step can have life-threatening consequences.

In 2011, Salmaan Taseer, the governor of Punjab, and Shahbaz Bhatti, the minister for minorities, were shot dead in separate attacks after advocating changes to the law.

Such killings have created a tinderbox atmosphere in parts of the country with a history of sectarian problems.

The Jhang police chief, Mr. Asghar, said the lawyers’ protests had stirred up wider tensions in the community and at one point led to an altercation between Sunni (deobandi) and Shiite lawyers. He had been forced to bring the blasphemy case, he said, to restore public order. “Armed clashes could have erupted in the city otherwise,” he said.

The police hope to end the standoff by persuading Mr. Ludhianvi to withdraw his complaint.

In Multan, police officials reported no progress in the case of Mr. Rehman, who was shot several times by unidentified gunmen who broke into his office on May 7. At the time, Mr. Rehman was the lead defense lawyer in a blasphemy case that others had rejected, fearing for their lives.

Weeks before his death, Mr. Rehman publicly complained of receiving a death threat in open court from lawyers for the prosecution, but the police and judiciary did not follow up.

“He did not fail anyone, everybody who mattered failed him,” his uncle, I. A. Rehman, wrote in the newspaper Dawn. “What matters more now is the sight of a society that seems to have lost all sense of shame or responsibility.”