Viva Karachi (Snippets of Karachi I lived In) – by Omar Alavi 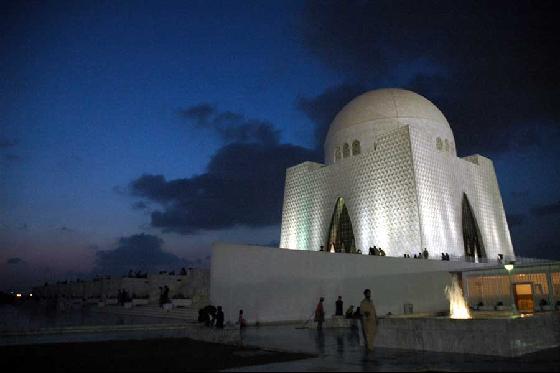 The face of the Regal Chowk glows from behind the heavy make up of smoke, grime and dust gathered from the decadent yet utilitarian vanity of decades. It tries to shine through and reflect on the stories it wrote over the years. The story of sunshine and happiness. The story of grey skies and heady days when the sky almost fell with rain and anarchy. The story of limited affluence and large-heartedness. The story of the inhabitants and the tale of the dream and the dreamer. Yes the Regal Chowk is privy to all that and more; and if you are lucky and stand in front of Thomas and Thomas and stare hard the ghost of the Regal past (no pun intended) will let you fly on the magic carpet of its beautiful noise and make you experience the vitality and glamour of a simpler life inside the hustle and bustle of the first freedom the city experienced – Viva Karachi!

I lived in Karachi without actually living in it. I shunned it for the most part. Thought of it as a passing fancy. Took a bite, moved on. But you can’t really move on. Karachi is like part honey part manure disguised as honey. It lingers and leaves a taste. You can’t get away completely. It leaves a mark on the spirit.

Karachi lives in the heart of the mind somewhere. It comes out and defeats the present with the force of History.The soul of Karachi is elusive as it should be. Its inhabitants are morphed yet each lives in seclusion from the present. Today is elsuive too. This moment lives in that mind and is made up of memories of a past half-lived half crept and a nightmare of the future mired in the lived-crept lifeime! Thus Karachi’s moments are in the celluloid of the mind. Dramatic, Black & White, they are in the story of its people

They say Karachi lost its cool somewhere between the fiasco of 1977 and the fires lit in the heart while it burned in 1995. Yet I see a resilience in the spirit of Karachi. When you go in search of the city that lit up the eyes once upon a time you find citizens with fortitude waiting to tell their stories. You find them in the heartland of Saddar, around the spear of the Tower, along the coastline lined up with fishermen, old men sitting down with a gleam undefined and the young who inherited a part of its spirit from their forefathers, the teddies who are now vigorous white-collar and the hippies who now don sparkling and creased shirts. Then there is the rubble which upon close inspection is crying out for the architecture that once stood erect with nuance and inflection. Karachi is there to be witnessed in its glory whether its through nostalgia or through the remnants of its character in People. Viva Karachi!

Looking for an identity either of ones own self or of that spirit that moves the city by the sea one can’t help but notice that there are three distinct groups of people (there may be more, sub sets in a way) who define an association with what it once was: those who lived it then as now, saw the highs, experienced the lows, lived the high life, swung about the culture, strutted their stuff; those who lived it vicariously through those who lived it, saw a glimpse of it before it was clamped down moodily; and those who believe in it believe it as a folklore both real and unreal! There are clear demarcation amongst these three. All three are vibrant, brilliant groups and all three are vigorous in their pursuits. The first group lived it, the third group in all probability will infuse the spirit that is Karachi with verve and brilliance in years to come. What happened to the Group in between: the lost souls, wistful, moody part of the group of Aunty Entity’s children. I am a survivor from that group. Viva Karachi!

Here’s to us then who are left behind to find the spirit that lives within us all:

It is not the city of the vanquished

nor the pride of the victors

you don’t settle down here

you are not of here but from here

you don’t put down roots here you simply pass by

She transforms every few seconds, decades to some, eons to others

she embodies the spirit of the seas and the souls of the desert winds:

She is a sea-faring beast…asleep

on the edge of the oceans that are not hers

she interjects her potion of love

to defile and then beguiles

Victoria was disarmed then disowned

Trams one day were just withdrawn

locals and circulars were cut

condemning there is NOT here

bridges built and torn down

and then built again

like “an end that begins and then begins again”

Sea upon sea of people hauled out and waved in