Home  »  Original Articles   »   Peoples under Threat Report 2014: Shias and Sunni Barelvis in Pakistan at great risk of violence and genocide at the hands of Deobandi militants 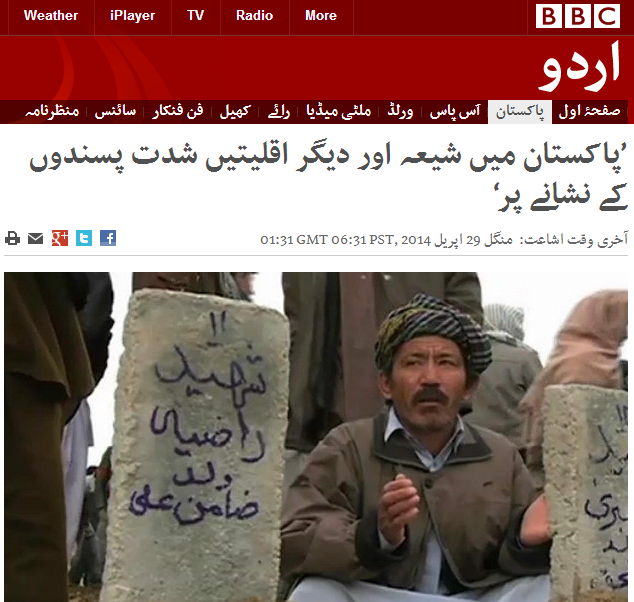 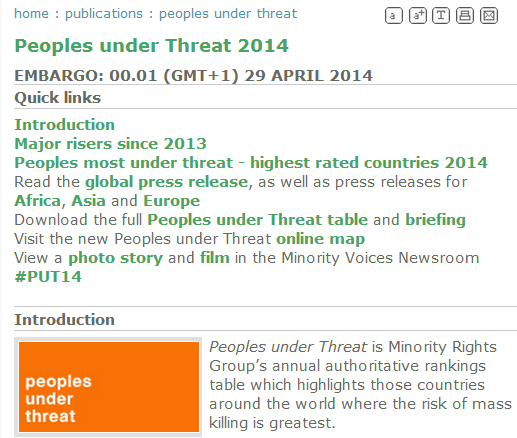 An Annual Report by Minority Rights Group International, titled “People Under Threat,” lists Pakistan amongst the top ten highest rated countries for the year 2014 where religious and ethnic minority groups are at great risk of violence and/or genocide. The report identifies Shia Muslims as most target killed faith group in Pakistan, followed by Sunni Barelvis/Sufsi, Christians, Ahmadis and other communities. The report identifies Deobandi militant groups, such as Sipah-e-Sahaba (ASWJ), Lashkar-e-Jhangvi (LeJ) and Taliban (TTP) as responsible for violence against Shias, Sunni Barelvis and other communities. In particular, the report identifies Shias including Hazara and non-Hazara Shias at great risk of violence and/or genocide at the hands of Deobandi militant outfits.

LUBP lauds this crucial human rights report about the most threatened groups in Pakistan.  The list is topped by Shia Muslims against whom Deobandi militants (operating as Ahle Sunnat Wal Jamat ASWJ aka Lashkar-e-Jhangvi LeJ) continue to publically incite Genocide.  ASWJ-LeJ represents the urban face of the Taliban and is the operational wing of Al Qaeda in Pakistan. It shares the takfiri-radical Deobandi ideology of the Taliban and is a party to violence against not just Shias but all other targeted groups in Pakistan, including but not limited to Sunni Barelvis/Sufis, Christians, Hindus and Ahmadis. 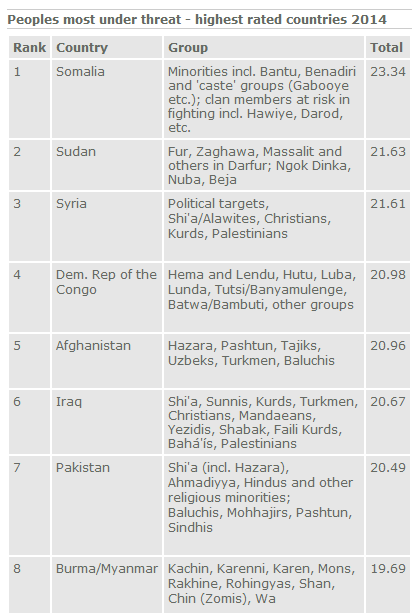 According to the report:

“The threat of ethnic or sectarian killing reaches across the country. This includes risks from interethnic political violence in Sindh, sectarian attacks on Sunni Barelvis by Deobandi militant groups, violent repression of Baloch activists in Baluchistan, continued persecution of Christians and Ahmadiyya, and an exterminatory campaign against Hazara and other Shia Muslims across the country waged by Deobandi militant groups, such as Lashkar-e-Jhangvi, Sipah-e-Sahaba and the Pakistani Taliban, which claimed the lives of hundreds of victims last year.”

ASWJ-LeJ, which was previously operating as Sipah-e-Sahaba (now banned in Pakistan), is a political ally of the PML N government and one of the largest beneficiaries of Pakistan’s judiciary, especially under the former Chief Justice, the controversial and corrupt Iftikhar Chaudhary. Numerous studies show how the ASWJ-LeJ is patronized by Pakistan’s largest Deobandi madrassa network, the Wafaq ul Madaris which receives the giant share of Pakistan’s Zakat as well as hundreds of millions of dollars from Saudi Arabia, Qatar and UAE whose Salafist ideology finds a close partner in Deobandi school of thought.

While the conservative right-wing Urdu media openly sympathizes with ASWJ-LeJ, it is disappointing to see that sections of Pakistan’s liberal elite have also provided unchallenged media platform to ASWJ hate mongers.  This includes both the recently targeted Raza Rumi from the Friday Times, whose attackers were also from the ASWJ-LeJ as well as Hamid Mir of Jang/Geo media conglomerate.  Even after providing space to ASWJ-LeJ leaders like Ludhyanvi, Aurangzeb Farooqi and Tahir Ashrafi, these journalists were not spared from their wrath.  The ASWJ-LeJ terrorists who murdered Raza Rumi’s Sunni Barelvi driver were recently apprehended.

Similarly, Human Rights groups and activists in Pakistan have done a pathetic job of diluting, obfuscating and even denying the ongoing Shia Genocide.

This includes the Pakistani chapters of Amnesty International, Human Rights Watch as well as Oscar winning activist, Sharmeen Obaid Chinoy who publically dismissed Shia Genocide.  Instead of using their considerable media clout and Western-funded NGO resources, Pakistan’s liberal elite and human rights resources (which act as a cartel) have done their best to dilute the narrative on Shia Genocide by reducing it to a laundry list of other human rights abuses.  Many of them are being deliberately obtuse when the misrepresent Shia Genocide as an ethnic issue by separating the Shia Hazara victims from the rest of the Shia victims.  The ASWJ-LeJ which is boastfully conducting this genocide has publically said that it is targeting Shias on the basis of faith and not ethnicity. Similarly, systematic attacks on Sunni Barelvis/Sufis by Deobandi terrorists of ASWJ-LeJ are largely ignored.

The same group of elitist liberals and HR celebrity activists  also dilute outrage against the Takfiri Deobandi ASWJ by regurgitating propaganda that provides justification for  Shia genocide.  For instance, Shias are often labeled, without evidence, as Iranian proxies.  One wonders whose proxies the Sunni Barelvis, Christians and Ahmadis are as they too are being targeted by the same ASWJ.  However, this common denominator is often obfuscated as well.

Instead of presenting clear reports with up to date numbers of Shia casualties, these celebrity human rights activists and elitist NGO liberals are too busy flattering each other on social media. LUBP has prepared a detailed report on Shia casualties which is probably why its editors and supporters are routinely mocked and abused by the same group of human rights celebrities who have done nothing.

Just a few days ago (April 2014), three teenagers tragically died inside a Deobandi seminary in Karachi when a grenade they were playing with accidentally went off. A few days back, a bomb blast aside a Sunni Barelvi mosque in the same city killed and wounded several people.  The world community needs to take note of these developments and ask questions as to what a grenade was doing inside a walled, grilled and heavily guarded Deobandi madrassa.