Home  »  Blogs Cross posted   »   The Hamid Mir case: ‘In Pakistan, they used to censor journalists – now they shoot us’ 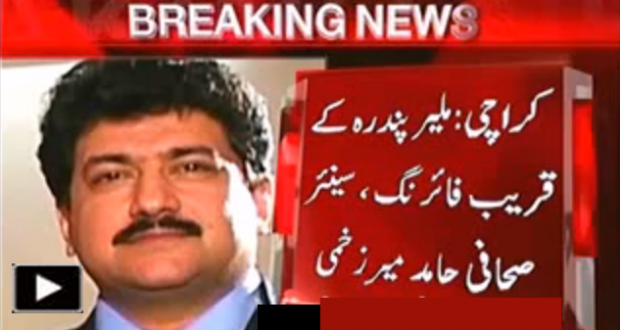 Hamid Mir was shot on Saturday while being driven through Karachi.

More than a hundred bouquets line the lobby of the private ward of Karachi’s posh, private Aga Khan Hospital. Outside, dozens of policemen with bulletproof vests and automatic weapons look at every visitor suspiciously, officers speaking urgently into their walkie-talkies. The Karachi police force is really good at strutting about after a high-profile crime has happened. One of the largest bouquets in the lobby is from the force. “Get well Hamid Mir,” it says. “We may not be able to protect you,” it implies, “but we know where to order the best flowers.”

Mir is upstairs recuperating. He took six bullets – in the ribs, thigh, stomach and across his hand – in an assassination attempt on Saturday as he came out of the airport to present a special broadcast on Geo, Pakistan‘s largest news channel. Mir had warned about a possible assassination. He had also named his would-be killers. That’s what his brother claims, that’s what his colleagues and managers at the channel say. Geo, just after the attack, broadcast the allegation and, in an unprecedented move, also flashed the picture of the accused: the head of Pakistan’s Inter-Services Intelligence chief, Lieutenant General Zaheer ul-Islam. In that picture he comes across as a big man. We are not supposed to know much about him except the fact that he is a very professional general. According to an internet myth very popular in Pakistan, the ISI has been rated as the world’s No 1 intelligence agency: Mossad is No 5 and MI6 languishes at No 9. According to television ratings, the man with three bullets still in his body is Pakistan’s top-rated TV journalist and one of the most vocal critics of Pakistan’s military and intelligence agencies.

One of the modest bouquets wishing Mir a full and speedy recovery is from the prime minister of Pakistan, Nawaz Sharif, who visited him in the hospital earlier this week after announcing a judicial inquiry. Going by the history of judicial inquiries in Pakistan, Sharif seemed to be saying: “Look Hamid, we want you to get well but don’t really expect us to find out who tried to kill you. Who is going to go and ask a working general? Meanwhile, here are three senior judges who will help you get over the whole thing.”

The day after the assassination attempt, Pakistan’s army chief General Raheel Sharif visited the ISI headquarters to show that he stands with his intelligence boss.

And the very next day, the Defence Ministry recommended that the channel for which Mir works should be shut down for bringing a national institution into disrepute. Geo’s competitors have joined the chorus.

For years, Pakistan has been one of the world’s most dangerous countries for journalists. From feudal landlords to Taliban fighters, sectarian groups to separatists, all have killed journalists. The question one needs to ask is: does the ISI, a national body often referred to as “a sensitive institution”, occasionally kill journalists? As any trained journalist would tell you, we need two sources before we can tell you a story. Here are two stories, with multiple sources and two different endings.

The light torture story
I was working in the BBC World Service in Bush House, London, when one of our reporters went missing in Pakistan’s capital Islamabad. A couple of phone calls to Islamabad colleagues established that he had been kidnapped from a university campus. He was picked up by people who came in pickup trucks, told the students that they were from the sensitive agency and that they were taking him to ask a few questions. Nobody except me, sitting far away from the crime scene in London, had any doubts that the ISI had kidnapped our reporter. I had heard from Islamabad journalists that they were visited on and off by ISI people to brief or debrief them about national affairs. People were occasionally reminded that we were all brothers. Why, they asked, didn’t some journalists love their brothers in the ISI as much as their ISI brothers loved them.

When our reporter went missing or, as his family and eyewitnesses said, was kidnapped by the officials of a sensitive institution, we were worried. You can’t really call up the ISI headquarters and ask them if they have kidnapped a reporter. So we called everyone else.

A friend of a friend’s contact, a colonel in the ISI, confirmed that our reporter was indeed with the ISI. This colonel must have been a really sensitive type because he assured us that he didn’t have anything to do with the kidnapping; it was another cell within the ISI, and our reporter would be released soon. We were relieved and thrilled that the ISI had reassured us that it had our man. We asked, almost in gratitude, if there was anything we could do to expedite the release of our colleague. “Make a lot of noise,” we were told by the sensitive colonel through a friend of a friend. “Make as much noise as you can.” We did make as much noise as we could while still remaining within the BBC’s editorial guidelines. In those days it usually meant overworking the fax machine and petitioning everyone – president, prime minister, chief of army, journalist unions, Amnesty International – basically everyone with a title and a fax contact.

Twenty-four hours passed – there was no sign of our reporter and we were still sending faxes. The BBC’s then Pakistan editor Aamer Ahmed Khan received a call saying that a body had been taken to a hospital and he should go and check. For the next hour, as Khan tried to reach the hospital, we didn’t make any noise. Jittery and relieved, he called to say that the body that had turned up wasn’t our reporter’s. “I felt so relieved I wanted to hug that body,” Khan wrote later.

Our reporter was released the next day, blindfolded and dumped on a deserted road outside the city. He had been tortured. “Light type of torture,” he said. He had been kept awake, beaten on his soles all night and asked about his alleged contacts with militants. He was abused and punched. Like most reporters doing the terrorism beat, he had a couple of phone numbers for Taliban spokespersons. “Can you repeat all of that on air?” I asked him after joking about light torture. “No way,” said the reporter. Before releasing him they had casually mentioned the whereabouts of his family who lived in places far less safe than Islamabad. “They have told me to keep shut about this and I think I should.” We, who were quite pleased with the success of our noisy campaign, also decided to shut up. In fact, the reason I am not naming the reporter here is that he still lives and works in Pakistan. But there was this other reporter who can be named, and now we’ll find out why

The “They didn’t mean to do it” story
Three years ago, journalist Saleem Shehzad left his home in Islamabad to appear on a TV show. He disappeared on his way to the studio. Months before his disappearance he had written to human rights activists and fellow journalists saying that he had received threats from the ISI. The day after his disappearance, his badly tortured and bruised body was found in a canal, still wearing the suit and tie he had put on for the TV show.

I wasn’t an editor any more. I didn’t know Saleem Shehzad so I didn’t make any noise. Out of curiosity I called up about half a dozen journalists in Islamabad. Every single one of them was sure that Shehzad had been kidnapped by the ISI. But a very senior journalist cautioned me that we shouldn’t jump to conclusions. “The ISI does pick up journalists from time to time but they don’t kill them.” A few weeks after Saleem Shehzad’s murder I attended a journalists’ protest in Islamabad where we all made a lot of noise. Hamid Mir was noisier than the others. In between the banner-waving I asked various journalists what might have happened. “Well, Saleem had just had this operation and they didn’t know it. They were just doing what they do. They didn’t mean to kill him.”

The notion was scary. If the world’s No 1 intelligence agency can’t administer torture properly, what can it do? Journalists often demand reforms to the workings of intelligence agencies. Are they asking for refresher courses in torture techniques? Journalists wanted an inquiry into Shehzad’s murder and the government gave them one. Human rights activists and journalists testified, submitting Shehzad’s email naming his would-be killers. The judicial inquiry didn’t find anyone responsible and basically concluded that we live in dangerous times. And yes, we should reform our intelligence agencies, said the judicial commission.

Killing journalists used to be a small‑town sport in Pakistan. Reporters and stringers in conflict areas and border towns have been routinely eliminated in the past few years. This sport has reached the metropolises this year. TV stations have been bombed, film crews targeted and most news establishments work from behind concrete bunkers. Media owners and executives go around in bomb-proof SUVs and accompanied by dozens of armed guards. Only last month, journalist and TV anchor Raza Rumi survived an ambush. His driver didn’t. Now Rumi lives in exile and will probably not be seen on TV for a while.

Geo’s president – a former newspaper editor named Imran Aslam – became wistful when defending his channel’s coverage after the assassination attempt on Mir. “There was a time that if they didn’t like what you wrote they censored you. They cut out a word or a line. If they got really angry they got your editor fired. Now they just shoot you.” A bullet in the head is the new form of censorship in Pakistan.

Did I say 28 Pakistani journalists have been killed during the past four years? Make that 29. As I was writing these lines, Shehzad Iqbal, a reporter for SAMA TV, was shot dead in Mianwali. I don’t expect many bouquets for his family. I don’t expect his family to blame any sensitive institution.

• Mohammed Hanif is BBC Urdu’s special correspondent based in Karachi. He is the author of A Case of Exploding Mangoes and Our Lady of Alice Bhatti.