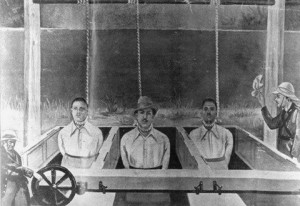 On 23rd March, 1931, 22 year old Bhagat Singh, and two 24 year olds Sukhdev and Rajguru were hanged in Lahore. These young radicals were one of the first Marxist revolutionaries in India. The slogan “Inquilab Zindabad” (Long live Revolution) was coined by Bhagat Singh and his comrades. The British imperialist government was willing to negotiate with the bourgeois leaders of the “nationalist” movement who were busy preaching non-violence to people brutalized by a barbaric regime. Bhagat Singh was unwilling to accept a subjugated, subordinate, peripheral, elitist, and communalist country. He argued that a change in masters would not alleviate the misery of the subcontinent; rather, he called for an end to imperialism itself. He called for a Socialist subcontinent. As a result, the British imperialists were unwilling to negotiate with these young partisans who had committed themselves to the cause of complete liberty, by any means necessary.

Bhagat Singh realized that an “independence” that merely transferred political and economic power from the white colonizer to the brown ruling classes would be completely meaningless and that the subcontinent would degenerate into a divided, communalist and poverty stricken region. And he was right. Today, South Asia is the poorest region in the world after Sub-Saharan Africa. Neocolonialism has replaced colonialism and it is operational with all its ferocity.

This is why the slogan raised by three young men in Lahore Central Jail on 23rd March, 1931 is still as relevant today as it was back then:

Long Live Revolution! Down with Imperialism!