The writer is an Islamabad-based TV journalist and tweets @FarrukhKPitafi
Editor’s note: The tweet by Hussain Haqqani says it all “the government of a country with 185 million people and nuclear weapons cannot by run through anonymous donations” . We are cross posting Farrukh K Pitafi’s article which looks deeper into the insecurity faced by Saudi Arabia. The Saudis are indeed between a rock and a hard place. The world should take note that these people are insecure enough and ruthless enough and have enough money to buy a war. To buy a war which may use weapons of mass destruction. Certainly they will be buying and producing more Takfiri Deobandi Millitants at the thousands of Madrassas or terrorist production factories across Pakistan modeled after Mulllah Sandwich Sami ul Haq Deobandi’s Akora Khatak. And certainly some ex ISI black sheep will be running a terrorist contractor outfit. The lure of Dollars and Riyals is simply too great.
****************
Saudi Prince Alwaleed bin Talal is not known for thinking, much for speaking. He is the one who received a stinging rebuke from former New York Mayor Rudy Giuliani after having presented a check worth $10 million. For Pakistan, similar callousness shown in an interview given by the prince to The Wall Street Journal in November last year has proven to be a constant source of headache. “Nawaz Sharif, specifically, is very much Saudi Arabia’s man in Pakistan,” claimed Mr Talal after having suggested that in case of Iran acquiring nuclear weapons, his country could procure nuclear warheads from Islamabad. Since then, a thaw between Washington and Tehran has further driven the House of Saud towards the brink and hence, Islamabad has witnessed a flurry of visits from the royal family.

Clearly as a panic response, Mr Talal’s comment was meant to be a veiled threat. There is no evidence to prove that it was either credible or it had any significant impact other than making things slightly difficult for the Pakistani government. A secretive Saudi handout worth $1.5 billion to Pakistan has added fuel to the fire of rumours here. Sadly, such rumours when viewed against the backdrop of the Abdul Qadeer Khan network’s exploits lead many to totally wrong conclusions. They also betray an uncanny ignorance of the complexity of the post-9/11 Pakistani state and society.

If truth be told, the uncovering of the AQ Khan network and its eventual dismantling had a sobering effect on the Pakistani state. Since then, the nuclear command structure has been reinforced with countless checks and balances and our conceptual framework edified. In other words, it is totally impossible for Pakistan to proliferate again. It is nowhere implied that the Saudi elite wouldn’t want to buy nukes from this country. There is a chance that at the time of the interview, Mr Talal might have thought as much, but nothing of the sort is possible in this fledgling democracy.

That said, let us also examine Prime Minister Nawaz Sharif’s policies and position. There is no gainsaying that the Saudis played a pivotal role in his rescue from the gallows. But still it is unfair to conclude that he can succumb to any such pressure to be a willing part of a proliferation ring.

There are two more things to be said here. First, the things that are being said about the Saudi connection are not unique. When he went to China, many thought that the country was being rented out to China. During his visit to the UN and the US, many thought that he had gone there to hand over control of the country. Similar fears were expressed about his meeting with Manmohan Singh. But that is more a reflection on his warm personal touch in diplomacy and the sorry cynical place Pakistan has become. So far, he has only brought foreign money and investment to Pakistan using his personal connections, a feat commendable on its own and not otherwise. Those who are acquainted with history know he returned home a changed man and need to, therefore, appreciate that the man is killing himself trying to ameliorate our lot. A tad more trust as a payback will not be misplaced here.

And it is an open secret that there are no free lunches in the international system. Only Saudis can explain why they have paid a hefty sum and are likely to pay more. It obviously can’t be the elusive brotherly affection, which is in short supply even among Gulf Cooperation Council countries. But if they have come here to shop for nukes, weapons, insurgents or a shipment of destabilising ideologies, then they should know Pakistan is a country, not a shop. There, however, is another explanation. A stronger Pakistan can have a stabilising effect on the region and work as a buffer without firing a single shot. Hence, this investment. Pakistan values its closest allies, the US and China, too much and attaches no less importance to Iran, to embarrass them with silly stunts. That has to be remembered. 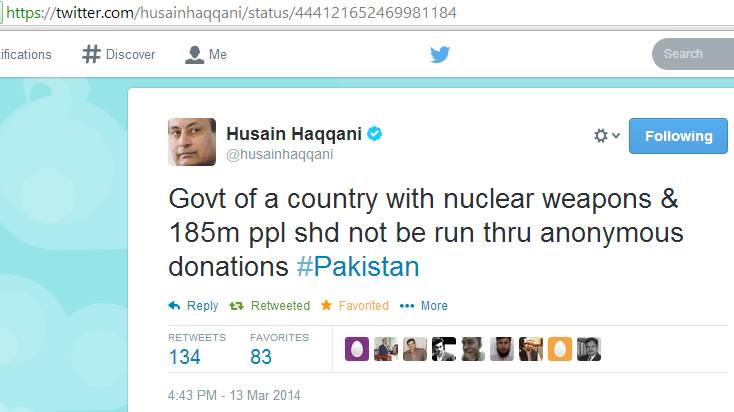