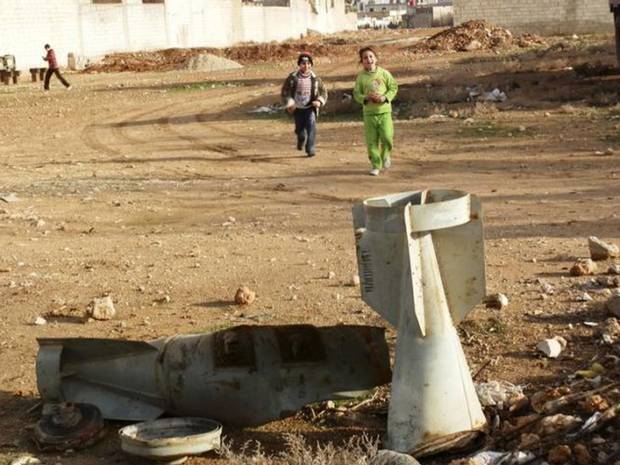 General Yussef Swaidan was doing the Syrian army version of hearts and minds, standing behind a fruit stall surrounded by a couple of dozen shopkeepers on the very edge of Daraya. See how well the army treats you. See how the lies of the terrorists about army brutality are wrong. I had heard this before.

The three-star general’s sunglasses reflected the midday heat, the crowd appropriately – or obediently – roared their support. There was even a civilian with a beard who opened the back of a van and distributed Syrian flags to passing schoolchildren. Then came a tremendous blast of outgoing artillery fire.

There were others who merely listened; the general’s giant conscript bodyguard, Tamer – steel helmet covered in camouflage, Kalashnikov cradled in his arms – was watching the length of the street and the surrounding alleyways, and glancing towards the rooftops. In ordinary life, he is a shepherd from Deir ez-Zour, but now he was watching a different kind of flock.

The general was quite frank about it. “Who knows if the terrorists did not leave people behind here when they left?” he pondered later. “There could be spies. If we continued down this road, you could be taken hostage. Your life depends on just one phone call out of here. Who knows what is in the hearts of the people?”

Grim words, but the 45-year-old general has a tough job. As field commander of Daraya – a place of constant battle and at least one massacre 18 months ago – he is, like other Syrian generals around Damascus, trying to talk his soldiers’ way back into the rebel-held suburbs, meeting “reconciliation committees” of doctors, shop-owners, religious sheikhs who live under the rule of Jabhat al-Nusra and other Islamist groups. “Syrian fighters who surrender their weapons will be given a clean record,” he told me. “The foreigners who are here must go, or their grave will be in Syria.”

It’s a hard sell, but it clearly worked just down the road in Lawan more than a year ago. The rebels have left and the shops are open and this little bit of Damascus was quiet. The soldiers were offered falafel – ground and fried chickpeas – by a local vendor. But then, he would do that, wouldn’t he? Who knows whom he gave his falafel to a couple of years ago when the rebels were here? The general watched all this with proprietary interest. This is, after all, his territory.

A balding man with a grey moustache, General Swaidan, of the Syrian army’s 4th Brigade, comes from Latakia (I think he is an Alawite, but he refuses to acknowledge any sect) and claims he has no ceasefires with “terrorists”.

I suspect this is true in one sense, and yet it is clear that the army is trying to use words as well as bullets to recover the lost suburbs around Damascus. As he talked peace, sitting on a chair in the weird environment of a long-disused nursery garden, a 155mm field gun fired off an artillery round over our heads, the shell hissing off on a range of 14 miles to protect, the general said, a military checkpoint under attack south of Damascus.

He is a political as well as a military man, accusing Qatar, Saudi Arabia, Israel and America of struggling to weaken Syria. “All made a mistake in thinking they could break the unity of the Syrian people.”

So how come the new weapons which the rebels are using – new radio equipment, new sniper rifles and new missiles – are crossing the border from Turkey, Jordan and Lebanon? “No nation in the world can control its borders when all countries conspire against it. The US cannot even control its border with Mexico. So how could Syria in these circumstances?”

Sitting beside the general was another officer, also wearing shades, who nodded from time to time and occasionally made a few comments of his own. Colonel Samir listened intently to all we said and I suggested, rather pointedly, that while the general was the field commander, he must be from military intelligence – an idea fervently denied but with enough laughter to suggest I might be right.

There was much talk of how the military and political leadership of Syria knew that Israel was waiting for this moment to hit Syria, and how they were ready to defend the country against this kind of attack. The general claimed – and he said the same to the people outside the fruit stall – that the Syrian army could take over all rebel territory in seven days but refrained from doing so because it did not want to kill its own civilians. “The terrorists are using the people as human shields,” he said. Now where, I wonder, have I heard that before? It is exactly what Israel says when it bombs civilians all over Lebanon.

“There will be no ceasefire with terrorists. I can’t trust them. They would use a truce to get more arms supplies.” These, he says, include weapons made in Israel, Ukraine and Belgium – the latter is certainly true, since I have seen captured Belgian pistols in Aleppo – and are regularly shown on state television. “No army in the world can defeat a conspiracy unless the people stand with the soldiers,” the general adds. “When we enter some villages which have been in the hands of terrorists, we often find pictures of Bashar al-Assad hidden behind closets. We get much of our information from civilians living in the terrorist areas.”

And that, of course, is exactly what the British Army used to say in Northern Ireland when it was also searching people’s homes.

As for General Swaidan’s soldiers, they arrive to salute their commander and are invited to talk to me: a group of conscripts who give their full names and their civilian jobs – one was a tailor, another a carpenter – and cheerfully say they are Sunni Muslims. Assad, of course, is an Alawite, but the general is careful of percentages, saying that 60 to 65 per cent of the 4th Brigade are Sunnis. “There is no sectarianism in this army, not in our brigade, and if you tour the checkpoints around the city, you will find most of the soldiers are Sunnis.”

The rebel forces in Syria, of course, are almost all Sunni Muslims, and that was the general’s point: Syrian Sunnis also fight for the army. And when I did stop at the general’s checkpoints and rather cruelly demanded to know their religion, almost all of them were indeed Sunni, some conscripts, many regular soldiers.

General Swaidan launches himself into a tale of the Prophet Mohamed. “He was sitting by the road one day with his friends and a funeral went by. The Prophet stood up and told his friends to pay their respects. One of them turned to the Prophet, peace be upon him, and said: ‘But don’t you know this is a funeral for a Jewish man?’ And the Prophet said: ‘Don’t you realise that the dead body is that of a human being?’ This is the essence of Islam.” To which I had absolutely no reply.