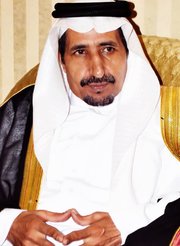 Editor’s note: We are cross posting the New York Times article on Mikhlif Al_Shammari, the human rights activists and moderate Sunni Muslim fighting for equal rights of the oppressed Shia Muslims of Saudi Arabia. We have also added a post script which talks about the moderate roots of the Shammari Arab tribes and their historical conflicts with the intolerant and oppressive Wahhabi Al Sauds. Here is a link to the Urdu translation of the article :  https://lubpak.com/archives/308709

RIYADH, Saudi Arabia — MIKHLIF AL-SHAMMARI has been jailed repeatedly, declared an infidel, ruined financially and shot four times — by his own son — all for this: He believes his fellow Sunni Muslims should treat Shiites as equals.

In a Middle East torn by deepening sectarian hatred, that is a very unusual conviction. He has made it a kind of crusade for eight years now, visiting and praying with prominent Shiites and defending them in print, at enormous personal cost. The government of this deeply conservative kingdom continues to file new accusations against him, under charges like “annoying other people” and “consorting with dissidents.”

But Mr. Shammari, a gaunt 58-year-old with an aquiline nose and a jaunty smile, is not easily discouraged. “I’m not against my government or my religion, but things must be corrected,” he said in a furtive interview in a hotel lobby (he has been banned from talking with the news media). “We must all encourage human rights and stop the violence between Sunni and Shia.”

Mr. Shammari is not Saudi Arabia’s best-known human rights activist, and others have put in more time and suffered much longer prison terms. But he has a rare distinction: No other member of the kingdom’s Sunni Muslim majority has made it a mission to demand equal rights for the Shiite Muslim minority.

Even the most educated and cosmopolitan Saudis often look down on Shiites, who make up about 10 percent of the Saudi population, as closet Iranians or undesirables. Some of the religious conservatives who wield great influence here go much further, saying Shiites are worse than Jews because, unlike genuine infidels, they have been exposed to the truth of Islam and nevertheless choose to pervert it. Shiites have long complained of discrimination of various kinds, as well as the vitriolic abuse hurled at them by government-employed clerics.

Mr. Shammari believes this is not just ancient religious prejudice, but a deliberate strategy by the Saudi monarchy to keep its subjects divided and therefore less likely to demand a voice in their government.

Whatever the reasons, it is clear that the sectarian divide helps to tamp down dissent in the kingdom. In 2011, for instance, even liberal and democratic-leaning Saudis were frightened off by protests in the kingdom’s eastern province and in neighboring Bahrain because they were carried out mostly by Shiites, the majority population there. Street protests are illegal in Saudi Arabia.

MR. SHAMMARI says his protest derives partly from his origins: He is a leader of the Shammar tribe, which includes both Shiites and Sunnis and straddles the border between Saudi Arabia and Iraq. The Shammar suffered discrimination in the early days of the Saudi kingdom, because they were viewed as having divided loyalties.

His activism has been extremely modest, by Western standards: Starting in 2006, he met and prayed with Shiites, and wrote several articles calling for an end to discrimination. He was promptly called in by Interior Ministry officials, who warned him to knock it off. He refused, and was jailed for almost four months.

When he emerged, Mr. Shammari said, his company, a subcontractor for the state oil company, Aramco, was bankrupt, its offices empty. The workers told him they had been warned by government officials to stay away. Furious, he decided to devote himself full time to human rights work, whatever the consequences.

The police had also detained his eldest son, Adel, then 28, for five days of questioning. When Adel got home, he had changed, Mr. Shammari said, and soon began telling the rest of the family that their father had become an infidel.

On Mr. Shammari’s return from prison, Adel — who had run away — began sending him death threats by text message, he said. He asked for help from the police, he said, but got none. Adel then fled to Iraq, where he fought in the insurgency. Returning home, Adel was arrested and placed in the kingdom’s rehabilitation center for jihadis, part of a high-profile effort to de-radicalize members of Al Qaeda. But when Adel got out after two years, Mr. Shammari said, “he was even more radical than before.”

At the time, Mr. Shammari had just emerged from his second jail term, this one 21 months long. The charges in that case were vague, but they followed well-publicized protests he staged after a judge tried to dissolve a Sunni-Shiite marriage on sectarian grounds.

In June 2012, Mr. Shammari organized a trip for the entire family to Mecca, hoping to reconcile with his angry son. But as they gathered in a Riyadh lobby at 6:30 a.m. to drive to the airport together, Adel emerged from a prayer room, pulled out a pistol and shot his father. Mr. Shammari jumped behind the concierge’s desk, while two Bangladeshi attendants fled. Adel shot his father three more times, but one of his sisters managed to knock the gun sideways, so that the bullets missed her father’s vital organs.

Mr. Shammari spent 45 days recovering in the hospital. When he got out, he said, “I found no reason not to keep helping people — immigrants, women subjected to abuse, other people in need.”

“I’m ready to pay with my life for my beliefs,” he added.

HE has received encouragement from one member of the royal family, a prince named Turki bin Khalid al-Sudairy, who helped him gain a position on a state human rights commission and a national program to combat domestic violence. Prince Turki urged him to travel around the kingdom and address its human rights problems, Mr. Shammari said. But the Interior Ministry continues to file charges against him. The latest came in December, when he was accused of inviting activists for dinner, visiting a dissident Shiite cleric, praying with Shiites, and the like. He was convicted on those charges and awaits sentencing.

Mr. Shammari speaks of his ordeal with a weary smile. He believes that Saudi society is only slowly evolving toward greater tolerance, and that those who push against old taboos will pay a price. But he finds it trying that human rights activists are often treated more harshly than murderous jihadists.

Last year, for example, Abdullah al-Hamid and Muhammad al-Qahtani, the founders of the Saudi Civil and Political Rights Association, were sentenced to five and 10 years in prison, respectively, on charges such as disobeying the ruler and forming an unlicensed organization. Such activists are routinely banned from travel outside the kingdom. Yet Mr. Shammari’s son Adel, who continues to call the house from prison every month and threaten to kill the entire family, had no trouble traveling to the Philippines and then to Iraq.

“If you’re in Al Qaeda, they reason with you, give you money, a car, a wife,” Mr. Shammari said.

Some of his friends and relatives urge him to tone down his activism, Mr. Shammari said wistfully.

“It’s hurting me and my family,” he said. “But I’ve reached the point where I cannot step back.”

Shammar under the leadership the of Al Jarba and settled in Iraq, reaching as far as the northern city of Mosul, their current stronghold. The Shammar are currently one of Iraq’s largest tribes and are divided into two geographical, as opposed to genealogical, subsections. The northern branch, known as Shammar al-Jarba, is mainly Sunni, while the southern branch, Shammar Toga, converted to Shia Islam around the 19th century[2][3][4] after settling in southern Iraq.

The Shammar that remained in Arabia had tribal territories extending from the city of Ha’il northwards to the frontiers of the Syrian Desert. The Shammar had a long traditional rivalry with the confederation of ‘Anizzah, who inhabited the same area. The city of Ha’il became the heart of the Jabal Shammar region and was inhabited largely by settled members of Shammar and their clients. Two clans succeeded each other in ruling the city in the 19th century. The first clan, the Al Ali, were replaced by the Al Rashid.

During the civil war that tore apart the Second Saudi State in the late 19th century, the emirs of Ha’il, from the house of Al Rashid, intervened and gradually took control of much of the Saudi realm, finally taking the Saudi capital Riyadh in 1895 and expelling the Saudi leaders to Kuwait. The Bedouin Shammari tribesmen provided the majority of the Al Rashid’s military support. Later, in the first two decades of the 20th century, Al Rashid were defeated by Ibn Saud and his Wahhabi forces during his campaign to restore his family’s rule in the Arabian Peninsula, with Jabal Shammar falling to Saudi rule in 1921. Following Al Rashid’s defeat, the clan of their uncles, Al Sabhan, eventually pledged allegiance to Ibn Saud in Riyadh. Ibn Saud also married a daughter of one of the Shammari chiefs, who bore him one Saudi King, Abdullah.

After the establishment of modern borders, most Bedouins gradually left their nomadic lifestyle. Today, most members of the Shammar live modern, urbanised lifestyles in Saudi Arabia and Iraq, and some sections settled in Syria and Jordan. Despite this, the vast majority of Shammar continue to retain a strong tribal identity and loyalty to their tribe. Many also participate in Bedouin Cultural Festivals to learn about their ancient lifestyles, and to take part in traditional activities like folk dance and tent-weaving.

The House of Rasheed (Arabic: آل رشيد Āl Rashid or Alrasheed) were a historic Shammar dynasty on the Arabian Peninsula. They were the most formidable enemies of the House of Saud in Nejd. They were centered in Ha’il, a city in northern Nejd that derived its wealth from being on the route of the Hajj.

The Al Rasheed derived their name from the grandfather of Abdullah, the first Rasheedi amir of Ha’il, who was named Rasheed. The Rasheedi emirs cooperated closely with the Ottoman Empire. However, this cooperation became problematic as the Ottomans lost popularity.

As with many Arab dynasties, the lack of a generally accepted rule of succession was a recurrent problem with Rasheedi rule. The internal dispute normally centered on whether succession should be horizontal (i.e. to a brother) or vertical (to a son). These divisions within the family led to bloody infighting. In the last years of the nineteenth century six Rasheedi leaders died violently. Nevertheless The Al Rasheed family continued to rule and fight together against Ibn Saud.

Saudi Arabia- The first twenty years of the 20th century on the Arabian Peninsula featured a long-running series of wars as the Saudis and their allies sought to unite the peninsula. While the Al Rasheed rallied the majority of other tribes to their side, the effort proved futile, and by 1921 Ha’il was captured and given to Ibn Saud’s army by the British command. Some members of the Rasheed family left the country and went into voluntary exile, mostly to Iraq. By the 1990s only a handful were still outside Saudi Arabia.

The Shammar are an Arabian Bedouin tribe. the tribe once ruled most of Arabia, and they had a state known as Jebal Shammar in Northern Arabia under quasi-independence however there loyalty to the Ottoman Empire was unquestioned. Unlike other Arabians tribes the Shammar did not partake in the Arab revolt, but wanted to crush it. The Sauds and the British would force the Shammar to be expelled from their ancient homeland into what is now Iraq.

note: for the complete article on Shammar tribe :http://www.forumbiodiversity.com/showthread.php/28341-The-Shammar-Bedouin-Tribe-of-Iraq-Syria-and-Arabia