Home  »  Newspaper Articles   »   Deobandi militants are eating at Pakistan’s heart. Will Nawaz Sharif take them on? 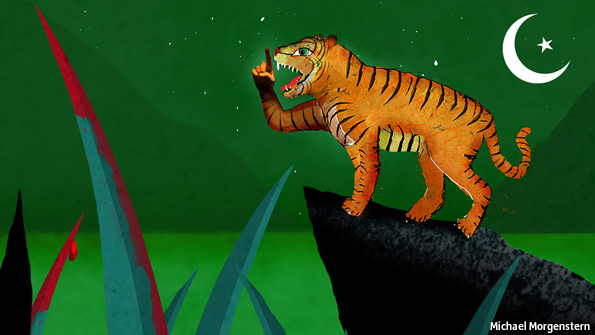 THE prime minister’s sprawling house in Lahore is crammed with cat sculptures, cat paintings and enough stuffed ex-cats to make a taxidermist purr. Nawaz Sharif’s party, the Pakistan Muslim League (Nawaz), has a badly drawn tiger as its symbol. Now that he is prime minister, the “Lion of Punjab”, as he is widely known, has to decide whether to show his claws and order a military campaign against the Pakistani Deobandi Taliban, an assortment of three dozen home-grown terrorist groups based mainly in the wild north-west of the country. For now, at least, he is likelier to hiss than act.

Mr Sharif, in office since June (his third go at being prime minister), should be doing much more about the Islamist violence that has claimed thousands of lives over the past decade. Sectarian murders and extremists’ bombs give Pakistan the feel of being on the brink of war. Karachi was once a liberal, industrial city, but the Taliban make their presence ever more strongly felt. In January they killed the city’s leading anti-terrorist cop, a charismatic and effective officer. They have also murdered journalists in the city whose coverage they did not like. Farther north, in Khyber Pakhtunkhwa province, Deobandi militants blew up a bus, killing over 20 army recruits. Even dispensers of polio vaccines are targeted.

Mr Sharif has long set store on talks with the terrorists. Perhaps the Deobandi Taliban would agree to murder less in return for concessions. Some in the Deobandi Taliban say talks are possible. Mr Sharif and his brother, Shahbaz Sharif, who runs Punjab province, have a history of dealmaking with extremists. The brothers, who are religious conservatives, used to say little against the Taliban, condemning instead “America’s wars” in the region. This policy bought protection: for the past five years the Deobandi Taliban and their Punjabi allies, Deobandi Lashkar-e-Jhangvi (LeJ), have carried out no big suicide-attacks in Lahore or elsewhere in Punjab. Nor, during last year’s election campaign, did candidates or rallies of Mr Sharif’s party suffer the threats and bombs endured by luckless secular types, such as the Pakistan Peoples Party. Hasan Askari Rizvi, an analyst in Lahore, calls such dealmaking a “naive view of dealing with terrorism”. But since some of Mr Sharif’s associates claimed ties to the LeJ, perhaps he saw a useful channel to the Taliban.

Yet a growing view is that Mr Sharif really is set on eventual military action, and that talks are about winning time. In the past few months the prime minister has been busy replacing the country’s president, army chief and chief justice. He has tried to keep on good terms with the army—a delicate act with Pervez Musharraf, a former dictator claiming a dodgy heart, on trial for treason. Mr Sharif and the new army chiefs appear to be rubbing along, helped by the fact that his government is a bit less incompetent and crooked than the previous crew. Meanwhile, he has tried to improve the economy and forge ties with India. A lot going on, in other words. Besides, political support for a military push is much harder if talks have not been tried first.

Evidence of a greater appetite for a full-blown assault on Deobandi Taliban bases in North Waziristan is growing. Last week, officially for the first time since 2007, Pakistani forces bombed North Waziristan, reportedly killing over 20 Taliban fighters. On January 27th lawmakers from Mr Sharif’s party appeared to back a broader military push. Two days later, for the first time in months, Mr Sharif showed up in parliament to talk about such an assault—though he also said a high-level team would continue to seek talks. He has huddled with the new army chief to discuss strategy. The rhetoric is getting tougher. Shahbaz Sharif says, “We have to win this battle hands down”; the time has come, he says, to act. Others in Mr Sharif’s camp say, “It is time to fight, to end this problem of the past 15 years”. Earlier criticism of America has been put aside. Indeed, America may quietly be helping create useful conditions. There have been few drone strikes in Pakistan, always controversial, since the death in November of Hakimullah Mehsud, the Pakistani Taliban’s deputy commander. And on January 27th John Kerry, resuming stalled “strategic dialogue” talks in Washington, pledged that America will keep aid flowing to Pakistan.

None of this, however, means that a push into North Waziristan will come soon. Deep winter is no time to start a campaign. And the Taliban has already promised to retaliate, making places like Punjab and the capital, Islamabad, vulnerable to large-scale violence again. To forestall this, the government has in mind a sweeping ordinance to give the army and police impunity in grabbing terrorism suspects. Increased abuse and torture would almost certainly follow. Those close to Mr Sharif say the risk of “some abuse” is worth taking. Yet it is unclear what difference the proposed ordinance would make: it was not a scrupulous regard for legal rights that let previous bombers through.

Mr Sharif probably also worries about politics. He has no wish to let Imran Khan—an ex-cricketer and diehard opponent of any attacks on the Deobandi Taliban, and an ethnic Pushtun like them—assume the galvanising role in opposition that Mr Sharif previously enjoyed. As if to stiffen his resolve, Bilawal Bhutto, the new young leader of the opposition Pakistan Peoples Party, this week urged Mr Sharif to push on with military action. Militants, after all, killed his mother, Benazir.

The time is now

Talk of Pakistani military action against the Taliban should be welcomed, even if it is actually designed to press them to talk. Making a better public case against violent groups who set off bombs in the name of Islam is a basic but long-neglected task of Pakistan’s leaders. Terrified of becoming targets themselves, few in public life dare to say the obvious: that extremists are destroying Pakistan from within. Like another lion, the timorous one in “The Wizard of Oz”, Mr Sharif may not be ready to act, but at least he could start to roar a little louder.