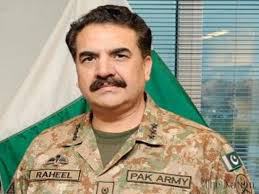 No gainsaying the fact that, today Pakistan is going through its most dangerous existential. The very survival of its state and society is at peril. I am sure that with the vast intelligence apparatus at your disposal; you must be the best informed person in Pakistan, regarding the terrorist threat to Pakistan. But sir, are you aware of the consequences of the government/ military inaction or lack of a cogent, effective response to unbridled terrorism?

Anyway, let me reiterate the current situation for you; as understood by a majority of Pakistanis:

1) The current situation can be described in one short phrase – a blowback of our 35 years of continuous policy of using non-state armies in pursuance of our regional geopolitical/ foreign goals.

2) The Frankenstein monster nurtured by the deep state now refuses to get back in the bottle. While it is true that some of the Deobandi TTP factions are being sponsored by some external powers; but who is to be blamed for this? This inferno is of our own making.

4) Talking about the policy, does your team understand the difference between COIN and anti-terrorism?

5) The non-policy that the army/ political leadership has been following; particularly after 2007 is just based on one strand – appeasement.

6) Even today, on the face of worst atrocities against the military and civilian population; your response is just reactive.

7) Am sure, in your defense you would say that the army is under the political government; but since when have this fact deterred you (the army leadership) from doing whatever you thought is in the best national interest? (Read corporate interest of the army leadership). Never mind that the army has arrogated to itself the authority/ responsibility to define the national interest.

8) Now coming down to the charade of “talks” with the Deobandi TTP. Do you really think it is pragmatic or logical? Do you really think that it will promote peace and tranquility in the country?  Do you not think that these “talks” are a non sequitur? Talks are always help between two legal entities; not with terrorists. Period. Talks always imply a certain “give and take”. Now pray tell me what could the Deobandi TTP give to you or what could the state concede to them? So what are the talks going to be about? Do you not realize the chicanery of this fraudulent government that, both the committees are populated either by card-carrying Taliban or their known apologists? Even if we concede the need for talks; then why is the govt not talking directly to the Deobandi  TTP? Why has it outsourced it to non-representative persona?

9) It is the considered opinion of most thinking Pakistanis that:

–         Nawaz is not serious about talks; it is just a gimmick to placate the gullible public.

–         Recent history shows that the Sharifs are master-appeasers of Deobandi TTP. Rumors are that there is a tacit deal between the Sharifs and the terrorists to spare Punjab and no action will be taken against them as long as they confine their mayhem in other provinces parts of the country.

–         About 1000 terrorists have been convicted and cooling their heels in the death row; why have they not been executed as per the law?

–         Shabaz has been paying stipends to known terrorists and also giving funding from the Punjab budget to terrorist organizations.

–         Rana Sanaullah, the mouthpiece of PML-N in Punjab is on record in admitting that there are 175 madarrasas/ centers of terror in Punjab. The same Sanaullah has been hobnobbing and striking electoral deals with the Deobandi TTP before the last elections.

–         Nawaz gave tickets to 55 well-known terrorists of Deobandi Sipah Sahba Taliban (or their apologist) for the last elections).

–         The logical corollary of the above could well be that, under the garb of ceasefire; the Deobandi TTP is restricted to FATA; while it ceases its terrorist activities in rest of the country. This will be tantamount to ceding a chunk of territory of Pakistan to TTP to declare its “emirate”.

–         An extended corollary may well be that in the due course of time Nawaz imposes “Sharia” to further appease Deobandi TTP and they accept him as Amir ul Momineen (fulfillment of his 1998 dream).

10) The above clearly manifests that Nawaz and his govt are in a de facto alliance with the terrorists, out to undo Pakistan. This makes Nawaz and his accomplices terrorists.

11) I hope you do realize the deleterious consequences of the acceptance of “ceasefire” by the govt and its desire to resume the “talks”? Let me put it down for you:

–         The Deobandi TTP has always used such “ceasefires” to reorganize and rebuild. And when they are ready, they will resume their nefarious activities from a position of strength.

–         Even after the declaration of ceasefire, 11 security personnel escorting polio teams and one student were killed by Deobandi TTP.

–         Have you General, ever given a thought that that, what would be the consequences on the morale and discipline of the armed forces in the face of restrains under Deobandi TTP atrocities? For how long would the army be able to maintain its professional and organizational integrity? Am sure you are well aware that such problems have been recurring with an increasing frequency.

–         These hypocritical “talks” will only enhance the image of Deobandi TTP and accord them legal status and legitimacy.

–         The military is the only impediment for the Deobandi TTP and their collaborators- the Sharif mafia; in realizing their designs. God forbids, if your inaction and acquiescence in the nihilistic policies of Nawaz and party castrate our armed forces, then what fate would befall on Pakistan?

12) You have been touted as the author of the army’s COIN manual; but where is the info- war component of the COIN? Looking at the cyberspace and print media; it appears that the Deobandi TTP has already won this crucial aspect of war.

13) Now the 64 million dollar question – what can you accomplish to get us out of this hole (created by your predecessors)? As one soldier to another; I would beseech you to straighten your spine, stand upright and without any ambiguity, vacillation or equivocation tell Nawaz that his current (non) policy on terrorism is wrong. A coherent and a holistic grand strategy should be quickly put together and immediately implemented; with the military force as its operational component.

14) No reactive/ retaliatory strikes; the military must grasp the initiative and strike to eliminate the terrorists and not merely contain them. We have seen the devastation and havoc caused on Deobandi TTP by the recent strikes. They should be continued with vigor and consistency.

15) The majority of the public (and the armed forces) have had enough; despite the supposedly lack of consensus touted as excuse by the ruling politicians; the nation wants ruthless action against the terrorists and to be delivered from fear and harm.

16) Ask Nawaz to declare emergency, since we are at war. Use the emergency to muzzle the enemy (pro-TTP) media; because they are not only giving propaganda space to the Taliban, but are causing despondency among the public. (I again need to ask you, where is the info- war component of your COIN strategy?).

17) Nihilistic and anti-Pakistan mullahs (nurtured and sustained in the first place by your predecessors) should be collared and put into the time-honored protective custody (that is another reason for imposing emergency).

18) Now such a policy/ action would produce two major problems: a) IDPS and b) eruption of Deobandi TTP retaliation in urban centers throughout Pakistan.

–         Urban Attacks. Enhanced and coordinated intelligence could pre-empt these.

19) You could tell Nawaz that if he cannot take the heat, then he should quit; after all he won’t die of starvation unlike a lot of our compatriots; since he has the looted goodies/ monies stashed abroad.

20) And General, if you cannot do all this; then take the honorable way and resign; otherwise we would be constrained to count you as part of the problem.